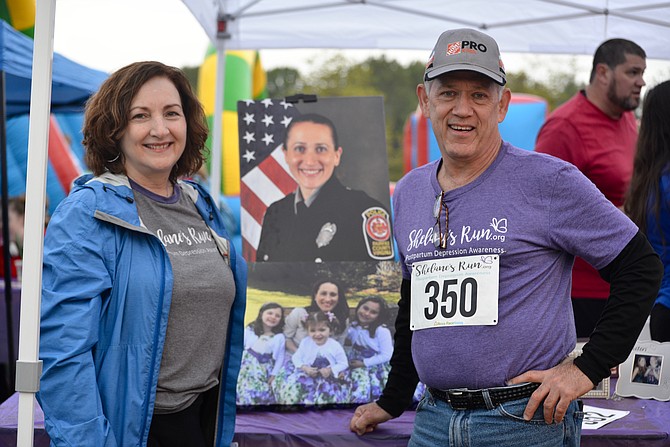 Joanne and Steve Bryant, the parents of Shelane Bryant Gaydos, pose with photos of their daughter and her children at the 3rd Annual “Shelane’s Run” charity race. Shelane died of suicide while suffering from maternal mental health issues and her family will “honor her memory and help others to avoid that tragedy.” Photo by Andrea Worker.

“Nowadays, whenever I see a pregnant woman or a mom with her kids, I have to smile, say ‘hello,’ and just make a connection. You never know who may need just that.” —Steve Bryant

Children lining up for the 1K – including Shelane’s daughter Sofia wearing bib number 235, and her nieces Emma, #57, and Madilyn, #56. Granddad Steve Bryant is leaning in from the right. The retired Army officer is giving the girls some last minute tips. 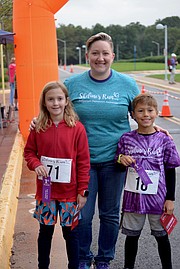 Shelane’s sister Sarah Bryant poses with the winners of the kids’ category, Siyeh Bartlett from Chantilly, and James Fink from Fairfax. Bryant came up with the idea for the charity race to honor her sister’s three passions “family, community, and running” while raising funds for maternal mental health resources. 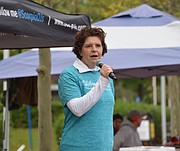 Adrienne Griffen founded Postpartum Support Virginia some 10 years ago, wanting to bring maternal mental health issues “into the light” where women can get help. “Postpartum depression and maternal mental health disorders are the number one complications of pregnancy and childbirth, but are usually misdiagnosed or ignored. It’s estimated that only 15 percent of women who suffer from some form of pregnancy or postpartum mental illness report their symptoms or get the treatment and support they need. We need this to end.”

A woman suffering a bout of the “baby blues” during pregnancy or after childbirth isn’t uncommon – in fact, it’s reported that about 80 percent of moms experience sadness, mood swings and just feeling “out of sorts,” particularly after the birth of their child. If there are no other significant stress factors or traumas involved, those feelings often dissipate within a few weeks.

In June of 2015, for Shelane Gaydos, a Fairfax County police officer, a wife, a mother of three young daughters, and a member of a close-by, close-knit family, those feelings escalated after learning that the fourth child she was expecting had died in utero. Two weeks after hearing the devastating news, Gaydos died of suicide.

Eventually, after the initial haze of their loss and through extensive research, her family came to believe that Gaydos was suffering from the rarer form of this maternal depression – postpartum psychosis – which can cause delusions and paranoia.

“We just didn’t know how much she was suffering, and holding in,” said her sister Sarah Bryant, echoing what so many loved ones of maternal depression sufferers have said before. “Shelane was such a vibrant and confident woman, so full of life and love for her family.” Bryant acknowledges that even now, there is guilt mixed in with the emotions of loss.

GAYDOS’ FATHER, retired Army Officer Steve Bryant, agrees with his daughter Sarah. “Shelane was always so independent, so tough – maybe too much so on herself.” As a career military man, Bryant admits he was never much on sharing feelings and emotions. Losing Shelane the way they did has changed that.

“I am pretty sure that there are a few women out there that wonder about me,” he said. “Nowadays, whenever I see a pregnant woman or a mom with her kids, I have to smile, say ‘hello,’ and just make a connection. You never know who may need just that.”

The Bryant and Gaydos families, along with Shelane’s many friends, took their grief and turned it into a positive — Shelane’s Fun Run/Walk — partnering first with Postpartum Support International and now with Postpartum Support Virginia, to raise awareness and funds to combat this too-often overlooked condition that can ruin lives and tear families apart at a time when many expect happiness should be at its peak.

In the fall of 2016, more than a year after losing Shelane, the first “Shelane’s 1K Walk and 5K Run” (and the first and only maternal mental health-focused charity road race) took off from the starting line at Fairfax County Government Center.

This year, on Saturday, Oct. 13, more than 500 adults and children on foot and in strollers, showed up at Government Center, braving a spot of rain and the arrival of autumnal temperatures, to take off once again to honor a life lost too soon, and to help prevent further loss and suffering.

But “this isn’t the time for sadness. It’s a time to celebrate, to have fun together,” Sarah Bryant told the crowd just before the 5K-ers were called to the line-up. “We are here to keep the memory of the three things most important to my sister – family, community, and running, being physically active.”

Adrienne Griffen is the founder of Postpartum Support Virginia (PPVA), based in Arlington. The nonprofit is the beneficiary of the funds raised through Shelane’s Run. She started the group 10 years ago, to bring more resources and assistance to the women of Virginia.

“I, too have been there, with the birth of my second child,” said Griffen. “The first was a breeze, everything you heard and read about, so the problems I experienced with the second were completely unexpected and bewildering.”

It took Griffen more than 6 months to find the help that she needed. “For the longest time, the answers I got were ‘which kind of anti-anxiety pills do you want?’ That was it.”

Griffen’s group have helped bring maternal mental health services to 23 hospitals around the Commonwealth. “We’re halfway to our goal of seeing these services, and trained medical professionals to screen, diagnose, treat, and offer support available in every hospital in Virginia that provides maternal care.”

Surrounded by fun activities for the younger set, as well as booths that provided information, support and resources for moms and their families, the 1K started the action. Lining up front and center were Gaydos’ daughter Sofia, and her two nieces (Sarah Bryant’s daughters) Emma and Madilyn. Some of the individual participants were so young that serious hand-holding was required, along with a lot of directing by race marshals, and there was the occasional “escape” as youngsters decided that running was a lot more exciting than walking.

James Fink, an 8-year-old from Fairfax and a first time racer, took first place in the kid’s category. Siyeh Bartlett, 8, of Chantilly was the first young girl to cross the finish line.

Thomas Johnson with the Fit4Mom team was the overall winner of the 5K, while Marissa Jambor Shipe was the top finisher for the women.

SHELANE’S FAMILY and the folks at Postpartum Support Virginia want women and their families to know that there is caring, professional and confidential support out there for them. “It’s not just about feeling bad,” insists Sarah Bryant. “There are powerful hormonal changes at work and they can have a terrible impact. Woman need help to treat these conditions.”

“Postpartum mental health issues are the number one complications of pregnancy and childbirth,” said Griffen, “but they are so undiagnosed or undertreated and women suffer from the added stress of societal expectations and the stigma of ‘not being a supermom.’”

“Please connect with us, and let us help,” said Griffen. Visit www.postpartumva.org. One can also connect with trained volunteers with personal experience with maternal mental health issues by calling 703-829-7152.