County looks for public input on Fairfax and Franconia-Springfield parkways. 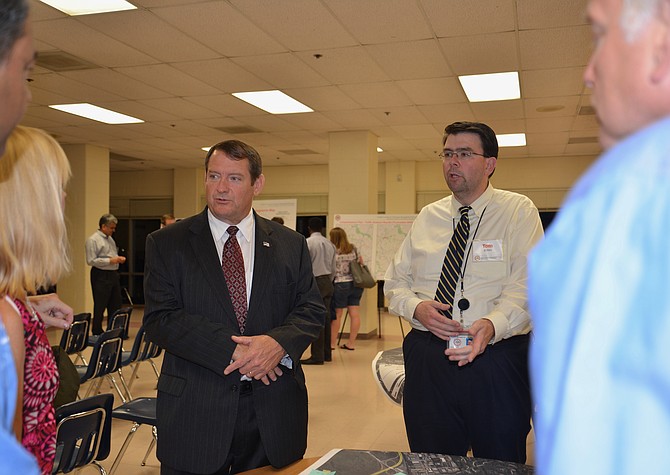 “Please, take the time to comment and give your suggestions, and tell your friends and neighbors. We need everyone’s voice.” —FCDOT Project Manager Thomas Burke

Neal Schiff and Patrick Maloy, local residents who attended the FCDOT presentation and public meeting on improvements to the Fairfax County and Franconia-Springfield Parkways, discuss some of the findings.

Fairfax County Department of Transportation (FCDOT) wants your opinions, comments and suggestions on improving the Fairfax County and Franconia-Springfield Parkways.

The start of any significant changes may be years in the offing, but FCDOT has been constantly considering the needs of both roads since the day they both first hit the drawing boards almost 40 years ago.

This month, FCDOT has been out providing updates to previous studies, by both the county and by the Virginia Department of Transportation (VDOT), holding three public meetings in Fairfax, Springfield, and Reston. In addition to a presentation by FCDOT Project Manager Thomas Burke, the meetings included a Q&A session, interactive feedback exercises, opportunities for public commentary, and a request that citizens utilize several offered methods to provide further public input.

“Everything is on the table, and we welcome all of your comments and suggestions, as the ones who are most familiar with these roadways,” said Burke at the meeting on Oct. 11 at Sangster Elementary School in Springfield.

Burke provided the attendees with a brief history of the development and construction of both roadways, with a timeline showing construction completion dates and studies that have already been conducted; the latest being the 2016 “short-term” study, led by VDOT that developed multimodal recommendations for short-term improvements that could be implemented within one to ten years.

FORTY-NINE of the 350 recommendations that resulted from the study have already been implemented, according to Burke. The next large-scale VDOT project to improve the Fairfax County Parkway will be its widening between Rt. 29 and Rt. 123, from four lanes to six, and will include building an interchange that will consolidate Popes Head Road and the future Shirley Gate Road extension. Improvements will also be made to the existing trail in the right of way and the building of a new shared-use path. At an estimated cost of $195 million using federal, state and local funds, Phase 1 construction is planned to begin in late 2019.

At the outreach meetings, Burke and his FCDOT colleagues are focusing on long-range plans for both roads, using complex and comprehensive traffic analysis models that assume several different improvements being made when “predicting” traffic patterns and flows as far out as 2040.

Even assuming the conversion of Fairfax County Parkway from its present 4 lanes in each direction to 6 lanes (possibly 8 in some locations) and the construction of several new interchanges, the models, said Burke, still show trouble spots, particularly in Reston at the Dulles Toll Road/Sunrise Valley Drive interchange on the northern section of the road and at the connection point with the Franconia-Springfield Parkway and I-95 and at Rt. 1.

Today’s Fairfax County Parkway runs almost 31 miles in length, from Route 7 (Leesburg Pike) in the North, to Route 1 (Richmond Highway) in the south. “This corridor is the primary connector for a lot of the major activity centers for our region,” noted Burke. Working on the parkways affects the secondary roads and those activity centers, just as changes to the centers affect the roadways. “Everything has to be considered.”

The citizens at the meeting – who braved the remnants of Hurricane Michael to attend – seemed well-informed on transportation issues, asking knowledgeable questions about specific interchanges, the effects on their homeownership along the parkway, and plans for transit options in addition to widening roads for a larger vehicle load.

For the most part, Burke wasn’t able to answer their questions with an equal degree of specificity – “this is just the planning stage, where all options are considered” – but he urged the attendees to continue to stay informed and express their views.

At one point, to a question about how much lead time a homeowner might expect if their property might be lost to roadway expansion or interchange construction, Burke did say that while any such information was a long way off, the goals of FCDCOT and VDOT were to protect property and the environment.

To inquiries about other transit options, Burke announced a new route being planned by the Fairfax Connector bus system that would connect the park-and-rides along the parkways, starting from the Herndon-Monroe site which will also be the location of a new Silver Line Metro station.

Aside from potential impacts to individual properties, the topic of tolls and HOV or HOT lanes elicited the most comments from the attendees.

The models that Burke described do include the addition of toll lanes. Running express bus service in “general use lanes sort of defeats the purpose and would discourage usage,” said Burke. Although nothing has been confirmed this early on in the planning stages, consideration is being given to making the new lanes be either High Occupancy Vehicle (HOV) lanes, or even tolled as HOT lanes.

This model assumption did not sit well with several of the citizens in attendance, including Neal Schiff and Patrick Maloy, who both placed their “dots” in the “No Tolls” column when the attendees were asked to participate in an exercise after the presentation.

“Tolling hasn’t worked out so well, here or elsewhere,” said Schiff, who added that “people should check out the contract with TransUrban.” (The Australian company that has ownership interests and manages the tolls lanes on I-495 and I-95.)

According to Schiff, taxpayers could be in for a financial hit if certain revenue goals are not achieved by the company.

Other area residents expressed concerned that tolls would just lead to more congestion on their secondary access roads, and impede the connections they make back and forth across the parkway.

Burke reiterated that all options and their effects would be considered, including the cost of bridging over intersections to allow residents to continue to access services and amenities that now make up part of their communities.

THE FORMAL MEETING ended, and attendees moved to presentation boards where they were given the opportunity to mark their “pro or con” stances on some of the alternatives being considered. FCDOT and VDOT representatives were on hand to assist and continue to answer questions and note comments.

A webpage to gather public input is scheduled to be operational on Tuesday, Oct. 16 and will remain active for about 30 days at www.fairfaxcounty.gov/transportation/study/fairfax-county-parkway.

In addition, the public can provide feedback by phone at 703-877-5600, TTY 711. Residents can also sign up for email and/or text updates at www.fairfaxcounty.gov/alertsand check out FCDOT’s Facebook page @ FFXTransportation.

“Please,” urged Burke, “take the time to comment and give your suggestions, and tell your friends and neighbors. We need everyone’s voice.”