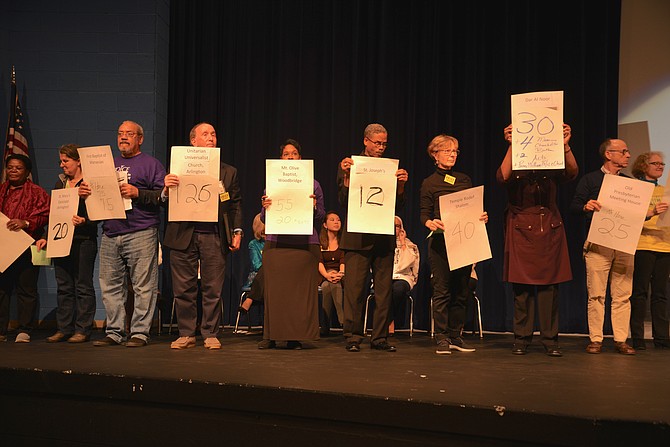 VOICE members take to the stage at the 2018 summit with pledge posters, showing how many of their group had signed up to help Get Out the Vote and to attend the next Legislative session in Richmond. “We will have at least 10 people per day calling for action in Richmond,” said VOICE leadership, who also noted that the the GOTV goal of 450 volunteers had already been exceeded by 150 persons. Photo by Andrea Worker.

“It’s one more step in the right direction.” —Marjorie Green, a lay leader at St. Mary’s Episcopal Church in Arlington and a spokesperson for VOICE 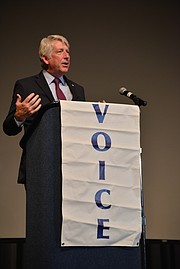 Attorney General Mark Herring announces his support and latest efforts to reform the cash bail system in Virginia before the attendees to the 2018 VOICE – Virginians for Organized Interfaith Community Engagement – summit.

At the event, Herring gave the attendees a preview of a statement released on Monday, Oct. 22, announcing the letter and legal memo he had submitted to the Virginia State Crime Commission outlining potential policy and constitutional concerns with the state’s current system, and providing principles for consideration toward reform that would “ensure public safety without unnecessarily jailing low-income Virginians.”

The commission is currently studying Virginia’s pre-trial process, including the cash bail system, and is scheduled to make their presentation to lawmakers on Nov. 18.

While Herring cannot set bail policy in Virginia, as attorney general he wields influence on all criminal justice issues. In his letter, addressed to Commission Chair state Sen. Mark Obenshain, Herring points out several concerns, asking that they be given full attention by the commission and offering to assist the commission and the legislature in their efforts.

In reviewing the current cash bail system, referring to numerous studies, and comparing the state of the system in Virginia to other jurisdictions and to federal law, Herring sees potential violations of the Eighth Amendment to the United States Constitution and Article 1 of the Virginia Constitution that both prohibit “excessive bail.”

In his statement, Herring writes that Virginia’s current system “too often determines who has money, not who is dangerous, and we can’t have a justice system that determines fairness and freedom based on wealth and means … I want to keep dangerous people in jail, I want people to show up for court … it doesn’t make sense, nor does it make our communities safer, to make a low-risk, non-violent person sit in jail, while more violent or dangerous people can go free because of their wealth.”

In 2005, Virginia took the nation-wide lead by instituting the Virginia Pretrial Assessment Instrument (VPRAI) to help calculate a defendant’s likelihood of failure to appear and level of danger to the society, but ultimately pretrial release is set by a judicial officer, usually a magistrate, and according to a 2017 study the magistrates typically do not receive any information from pretrial service agencies that could better inform their decision.

Herring expressed concern that under Virginia law judicial officers are granted broad discretion to set the term under which defendants can obtain pretrial release.

“Alternatives to cash bail bonds are rarely used. Therefore, many people who are eligible for [pretrial release] face incarceration while awaiting trial merely because they cannot afford to pay the bond.”

The negative impacts of unnecessary incarceration are widespread. Low-risk, nonviolent defendants who must remain in jail pending trial often lose their jobs, their homes, their cars, and even their families, as a result. “This is not the answer,” said Herring. “Continuing on this path only increases the problems we face.”

Studies support his assertions. A 2016 report by the Prison Policy Initiative found that Virginia’s pretrial detainees increased from less than 3,000 in 1978, to almost 9,000 in 2013. By 2015, Virginia’s incarceration rate was approximately 150 percent of the national average.

In his arguments for reform, Herring noted that last year about 28,000 Virginians were released under pretrial supervision – and 94 percent of them showed up for their court appearance and stayed out of trouble.

Holding the non-violent, low-risk accused because they cannot pay bail also has a negative effect on the state’s economy.

Herring reports that it costs about $3 a day to maintain someone on pretrial services versus about $85 per day if they remain in jail. “So if we make smart reforms we could be talking about millions in savings while still meeting our public safety goals.”

Treating defendants differently depending on their ability to afford bail may also raise equal protection concerns in violation of several federal and state laws and statutes. Herring also questions the frequent absence of counsel or representation from the prosecution at many bail hearings, a situation that may violate the Sixth Amendment, upheld in a case before the United States Supreme Court in 2008, that makes it a right to counsel when a person has been placed under arrest and makes an initial appearance before a magistrate for the determination on probably cause and the setting of bail. It is not clear under Virginia law whether a bail hearing alone constitutes a “critical stage,” requiring the presence of counsel for the defendant.

VOICE is a non-partisan coalition of some 55 faith communities and civic organizations from Fairfax County and surrounding areas, Alexandria City, Arlington County and Prince Williams County and neighboring areas. While involved in a variety of community improvement actions, “Restorative Criminal Justice,” sits high on the group’s target list of initiatives that its membership works to see enacted.

Marjorie Green, a lay leader at St. Mary’s Episcopal Church in Arlington and a spokesperson for VOICE, praised the announcement of Herring’s initiative as a testament to the impact that citizens united can achieve. Green noted in a statement that “this newest effort grew out of conversations between VOICE and the attorney general in recent months.” VOICE reported the results of listening sessions held with more than 7,000 residents of Northern Virginia about their chief concerns. “It’s one more step in the right direction.”

Rev. Keith Savage, pastor at First Baptist Church in Manassas and a member of VOICE’s key leadership team, added “Pure and simple, cash bail is a tax on being poor … we spend millions warehousing people in jail for the sole reason that they cannot afford bail … yet our community was not made any safer.”

VOICE membership committed to actions to “hold our lawmakers to account” on this and other civic issues.

The full contents of Herring’s letter and the media release providing additional background information is available on the Attorney General’s website www.oag.state.va.us.