In the Race For Alexandria School Board
Votes

In the Race For Alexandria School Board 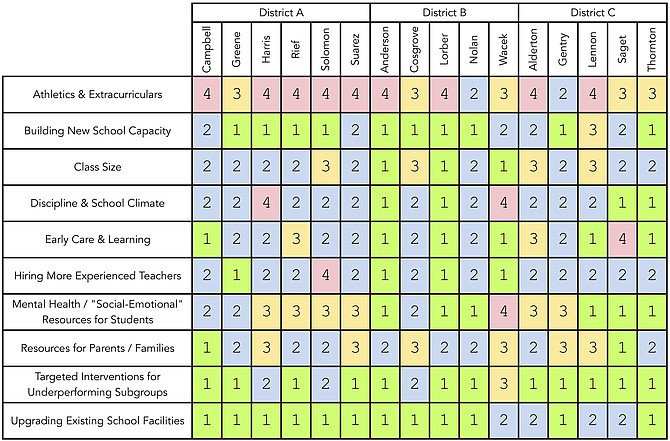 Relative issue priorities: Green #1 = high relative priority; Blue #2 = above average; Yellow #3 = below average; Red #4 = low relative priority. For ease of comparison, this chart compiles candidate responses to the following question: “Assign relative priorities to the following issue areas, in terms of where you intend to budget finite dollars, political capital, personal time, staff time, etc. (Try to disperse rankings evenly — i.e., don't rank everything highly. The scale is relative not absolute. Granting that these issues all have merit and aren't always mutually exclusive, in a world of constraints, every issue can't have an above average or high priority relative to the rest.)” 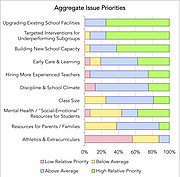 For ease of differentiation, this chart shows where candidates agreed and disagreed most about relative issue priorities. The issues in the middle of the chart yield a broader spectrum of views, whereas the issues toward the top and bottom yield more agreement.

For this reason, the School Board election on Nov. 6 is important for all residents and taxpayers, regardless of whether they have children in the public school system.

The School Board, consisting of nine members, is essentially a second local legislature, governing everything having to do with public education in the city. Except, unlike City Council, it doesn’t exercise its own power of the purse. Rather, it receives an annual funding allocation from council, which is the only body between the two with taxing and bonding authority.

Whether or not School Board candidates have clear partisan preferences, state law requires that they run as independents.

Unlike City Council members, whom voters elect at large, School Board members are elected from three separate districts. District A covers roughly the city’s eastern third, District B the middle third, and District C the western third. A voter can choose up to three School Board candidates, but only among those running in the district where the voter resides.

For those who qualify, early absentee voting has already begun. Vote in-person absentee at the Voter Registration Office (132 North Royal St.) or Beatley Library (5005 Duke St.). The deadline for in-person absentee voting is 5 p.m. on Saturday, Nov. 3. Apply for an absentee ballot by mail by visiting vote.elections.virginia.gov, entering your identification information and following the subsequent prompts. The deadline for applying for an absentee ballot by mail is 5 p.m. on Tuesday, Oct. 30.

Vote in person at your appointed polling place between 6 a.m. and 7 p.m. However, to avoid potential parking challenges and long waits, the registrar recommends voting between 10 a.m. and 4 p.m. if possible.

For more information, including a map of polling places, visit www.alexandriava.gov/Elections or call Alexandria’s Office of Voter Registration and Elections at 703-746-4050.