A More Challenging Course on the Potomac
Votes

A More Challenging Course on the Potomac 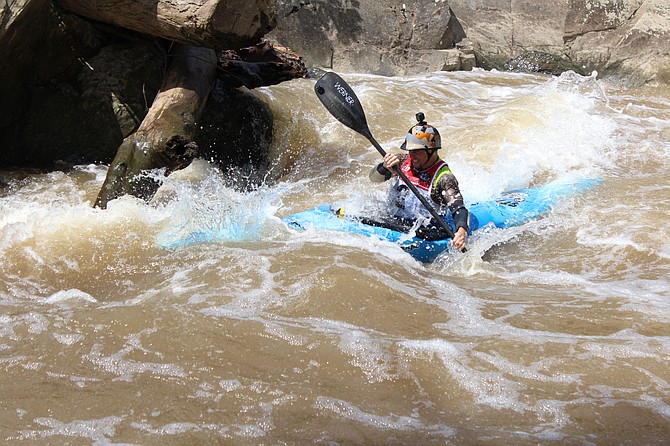 The race was held on the Fish Ladder, the drop closest to the Maryland side, because the river was so high. Photo by Ashley McEwan

Spectators on the bridge going out towards the falls watch as racers come by. 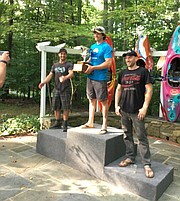 Pat Keller, Tad Dennis and Nejc Poberaj, from left, winners of the open boat class, Great Falls Race, are honored at the Potomac River Festival Saturday. The race was held earlier that day.

Higher than usual water on the Potomac River Saturday, Aug. 25, meant fewer paddlers entered the 30th annual Great Falls Race but that did not dampen the enthusiasm for the morning event or the afternoon Potomac River Festival.

“Thirty-one boaters signed up but not everyone raced,” said Geoff Calhoun, vice president of the Great Falls Foundation, which organized and sponsored the race and festival. “The water level challenged [many people’s] comfort level.”

Jacob Siegel, 21, of Bethesda, said Great Falls was the first Class 5 water he ever ran. He was one of the 10 finalists in Saturday’s race, which was held on a shorter and “easier” section of the Falls called the Fish Ladder.

The Great Falls Foundation was formed in 2016 to sponsor the race and other river related activities.

“Up until that point, the Great Falls of the Potomac Race and Festival was organized ‘ad hoc’,” said Chuck Thornton, president of the Foundation. “Sometimes it was organized [well], sometimes not.”

The foundation also gets National Park permits, organizes sponsors for the event and is able to provide insurance for participants.

After the race, the festival took place at Rockwood Manor on MacArthur Boulevard.

The beautiful weather meant guests could be outside for the late afternoon dinner, social time and awards ceremony. It was a family friendly festival, with children and dogs welcome to wander about and play on the grounds while adults browsed the paddling equipment sponsor tents and those of local paddling schools and organizations.

A big hit with the children was the bubble machine, blowing small bubbles for them, and some adults, to walk through and try to catch or pop. There were also balls to kick around and a live bluegrass band to enjoy.

Most of the talk though was about the race.

Winner of the open boat category, meaning racers could use whatever boat they wanted, was Tad Dennis of Nantahala, N.C.

“I thought the higher water definitely made it more challenging, I like that,” Dennis said. “I do all the big races [across the country] every year but this was the most interesting, the big water made it more pushy — it pushes the boat around.”

Second place in the open boat category went to Pat Keller, of Asheville, N.C. who came up for the race. “It's one of my favorite races, its challenging,” Keller said.

Anand Blum, 17, of Silver Spring, took first place in the under 17 class. He said he has been paddling for five years and first did the falls a year ago.