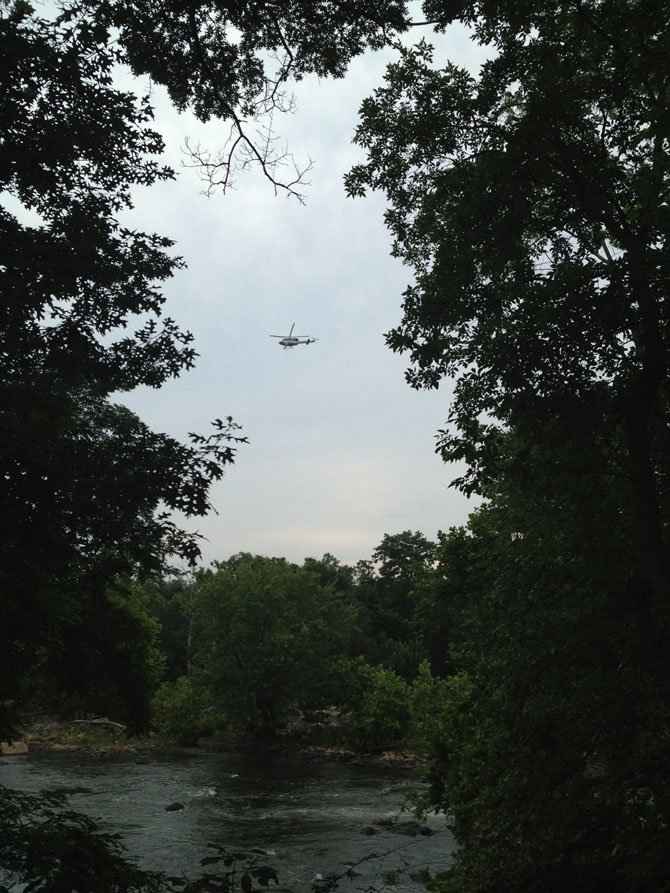 Christy "disappeared while going down the falls and was pinned underneath the water for a period of time," according to Montgomery County Police Reports.

How Did Shannon Christy Drown?

"The two boaters, Will Seeber and Shannon Christy, had the intention of kayaking down familiar lines of the Falls. Together, they paddled down to the starting area above the first drop. ...

"Shannon went first into the first drop of the Center Lines of the Falls, [called] 'Grace Under Pressure.' From Will’s vantage point above, her entry into the waterfall looked normal. Will followed approximately 15 seconds behind Shannon, only to find no sight of her at the base of the waterfall.

"Will proceeded into the second section of the Center Lines, 'Ledges,' thinking that Shannon had paddled down as if practicing a continuous run. While Will was approaching the final waterfall of Center Lines, 'The Middle Finger,' Shannon appeared, swimming out of her boat in full paddling gear.

"She was swept down the slide, 'Hollywood Boulevard,' rapidly approaching 'Subway,' ... a known deadly section of the run. The cause of Shannon’s swim is unknown. Will attempted to come to her aid, but could not reach her in time before the fast-moving currents pulled Shannon into 'Subway.' Will paddled down 'The Middle Finger' in order to attempt to rescue Shannon. There was no sight of her.

"Minutes later, her PFD and helmet surfaced. ... After Will notified park rangers and onlookers at the shore, rescue crews arrived via motorized raft. Rescue personnel transported Will down the river to Old Angler’s Inn to speak with authorities. ...

"An extraordinary rescue effort was then led by professional kayakers, Steve Fisher and Jason Beakes. The sophisticated effort was executed by numerous kayakers who arrived on the scene to assist. Will returned to Great Falls to help the other kayakers in the rescue. The team was able to successfully extract Shannon’s body from a catastrophic underwater pin in 'Subway' hours later."

Christy drowned the day before the 26th Annual Great Falls Race, "a festival of top kayakers who celebrate and promote the Potomac River, the sport of kayaking, and the large and diverse community of paddlers in the region," according to the festival sponsor Active Nature. The race was cancelled, replaced by a memorial service in honor of Christy for her family and friends.

"We are saddened to have lost a dear friend yesterday due to drowning at Great Falls on the Potomac River," according to an Active Nature statement. "Shannon Christy loved kayaking and it is through kayaking that we honor her memory."

Posted on Potomac Outfitters Facebook page: "We lost an amazing member of our paddling community yesterday. Our thoughts and prayers go out to the friends and family of Shannon Christy."

"She was a ray of light," said Will Seeber, expert kayaker and Christy's friend who spoke at the memorial service. "Everytime she met people and in every circumstance ... she was positive and happy and literally like a ray of light. That's the feeling I keep when I think about Shannon."

"For those who never got to meet Shannon, here is an amazing video to give you a little insight into the amazing human being that she was as well as the incredible impact she had on our community even in the end," according to Potomac Paddlesports, http://vimeo.com/m/70285367.

THE POTOMAC RIVER at Great Falls, class V-plus rapids, builds up speed and force as it falls over a series of steep, jagged rocks and flows through the narrow Mather Gorge. The falls consist of cascading rapids and several 20-foot waterfalls, with a total 76-foot drop in elevation over a distance of less than a mile. The Potomac River narrows from nearly 1,000 feet, just above the falls, to between 60 and 100 feet wide as it rushes through Mather Gorge, a short distance below the falls, according to the National Park Service.

Less than two months ago, on May 22, Montgomery County Fire and Rescue, Fairfax Fire and Rescue, National Park Police from the Chesapeake and Ohio Canal National Historical Park at Great Falls, and the Potomac Paddlers Volunteer Corps, warned the public about the dangers of the river.

"There's a lot of undertow and undercurrent," said Caleb Lowe from Montgomery County Fire and Rescue Services at the safety event in late spring. "You can get sucked underneath and pinned underneath real quickly."

"Once you get down there, the force of the water and the current of the water will hold you and just stick you against the rocks. There's no getting out from that point," he said.

During the past three weeks, two young men swimming in the Potomac River gorge, where swimming is prohibited, have drowned. 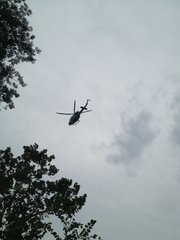 A helicopter searches for kayaker Shannon Christy on July 11 along the Potomac River at Great Falls.

On Saturday, June 29, a 21-year-old drowned on the Potomac River near Bear Island. Three of his friends attempted to save him, but were unsuccessful. His body was discovered Monday, July 1. According to Montgomery County police, the victim was diving off the cliffs on the Virginia side of the river when his friends noticed him go under the water and not surface. The victim was identified as Vincent Crapps of the Third United States Infantry Regiment (The Old Guard), stationed at Fort Myer, Va.

On June 24, Ngo Tekwe Forchick, 19, of Takoma Park, drowned after attempting to swim near Purple Horse Beach along the Billy Goat Trail with three friends. His body was discovered two days later.

In both cases, extensive rescue searches were conducted by land, water and by air.

THIS TIME of year causes the greatest concern to park officials, since river levels are high, summer temperatures soar, and large numbers of visitors flock to the river.

Historically, kayakers and paddlers are "the ones who respect the river the most and know about the rivers' currents and dangers," Brent O'Neill, site manager at Great Falls Park, said at the safety event at the beginning of the season.

"Truthfully, there is a long history of kayakers and canoeists who have saved lives by assisting a victim in the river," said O'Neill. "For instance, there have been incidents where swimmers or waders who become distressed in the river and the only help around at that moment in time is a paddler on the river who provides assistance to land that person safely back on shore. Some stories are hair-raising accounts."

The National Park Service and the local boating community partnered together to form a group called Potomac Paddlers Volunteer Corps to work towards safety on the river. "We have increased visibly on the river, making contacts with park visitors engaged in risky activities on the river and saving lifes."