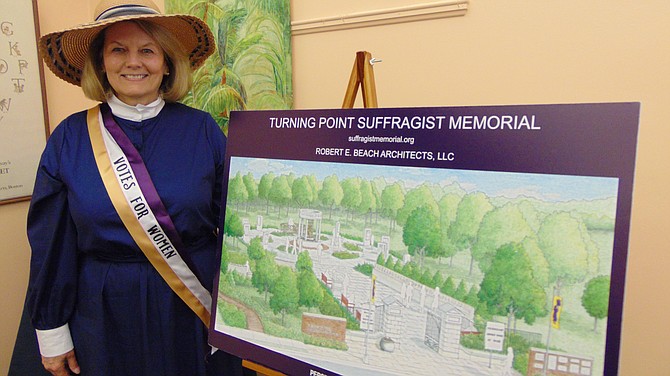 An artist’s rendering of the Turning Point Suffragist Memorial.

Next Step for Equality

After the 19th Amendment affirming women’s right to vote was ratified in 1920, suffragist leader Alice Paul introduced the ERA in 1923 as the next step in bringing "equal justice under law" to all citizens. The proposed Equal Rights Amendment (ERA) states that the rights guaranteed by the Constitution apply equally to all persons regardless of their sex.

In 1972, the ERA was finally passed by Congress and sent to the states for ratification. The original seven-year time limit was extended by Congress to June 30, 1982, but at that deadline, the ERA had been ratified by only 35 states, three states short of the 38 required to put it into the Constitution.

Now, Virginia could be the last state needed to ratify the Equal Rights Amendment, which would pass on the floor of the House and the Senate in the session beginning Jan. 9, 2019, if opponents don’t prevent the vote by tying it up in committee.

Section 1. Equality of rights under the law shall not be denied or abridged by the United States or by any state on account of sex.

Section 2. The Congress shall have the power to enforce, by appropriate legislation, the provisions of this article.

Section 3. This amendment shall take effect two years after the date of ratification.

The ERA has been introduced into every Congress since the deadline, and beginning in 1994, ERA advocates have been pursuing two different routes to ratification:

A $2 million National Turning Point Suffragist Memorial is slated to be built in time for dedication on Aug. 26, 2020 at Occoquan Regional Park near the Occoquan River, said Patricia Depew Wirth, who is the executive director of the Turning Point Suffragist Memorial Association. The memorial planned near the Jean R. Packard Events Center is intended to honor the 5 million women who fought for women’s suffrage.

On Saturday, Sept. 15, Patricia Depew Wirth told 40 members and guests of AAUW Springfield-Annandale branch at Kings Park Library in Burke that the memorial will contain various elements that all have a basis in suffragist history. There will be replicas of the White House gates and a wall to honor the women who were jailed in Occoquan Prison with plaques for each. It will also contain 19 information stations that will tell 72 years of the history of the Suffrage Movement, from 1848 to 1920. The memorial will include a bridge to “bridge the two centuries” that it took to get the women’s right to vote. Rotunda pillars will represent Democracy. The memorial will also contain a meditation garden and interactive kiosks.

So far, Turning Point has received roughly $1 million in-kind and cash donations; Fairfax County donated $200,000 towards it, but it is still short on needed funding to complete the project. Some of The Turning Point’s strategic partners include: AAUW, League of Women Voters, and NOVA Parks, which is donating the land and the perpetual maintenance of the facility. Donate at www.suffragistmemorial.org

In addition to the Memorial, they are developing a Constitution Trail starting at the National Archives, going to Mount Vernon, Gunston Hall, Montpelier and to the Turning Point Suffragist Memorial.

WIRTH, who worked in the automotive service industry for 30 years, and now devotes all of her time to building the memorial, gave a presentation of the movers and shakers in the Women’s Suffrage Movement, starting with an audio of the Declaration of Sentiments — the document that changed course of women’s lives in Seneca Falls, N.Y., in 1848. It was signed by 68 women and 32 men at the convention.

She talked about the contributions of icons Elizabeth Cady Stanton and Lucretia Mott, who met in 1840 in London, England, to attend an international abolitionist convention.

“Many early suffragists were abolitionists. In that period of time, if you were married, you belonged to your husband. … Women were limited in their ability to get higher education and get into the professions. They did not feel equal. That’s why this movement got going,” she said.

Wirth mentioned the contributions of Susan B. Anthony, of New York State, who dedicated her life to suffragists. In 1851, she marched into a polling place and attempted to vote but she was thrown on the sidewalk, manhandled and arrested for the crime of voting. “She had a trial, was found guilty of voting but never went to jail. She was a wonderful woman to be reckoned with,” she said.

Mary Church Terrell, the founding member of NAACP in 1909, was the first African American woman to go to college, Wirth said. Terrell went to Oberlin, was a teacher, principal, and member of the Delta Sigma Theta sorority.

Another woman, Carrie Chapman Catt, was involved in National American Woman Suffrage Association and founder of the League of Women Voters in 1920. She focused on getting the vote state by state, by establishing offices in every state. She came out with “The Winning Plan” strategy that involved getting an Amendment to the Constitution and turned all those state offices into the League of Women Voters.

Wirth mentioned Alice Paul, the co-founder of the National Woman’s Party, a Quaker from New Jersey, who authored the Equal Rights Amendment in 1923. “She became aware of the Suffragette movement in England overseen by Pankhurst family,” she said. Paul marched with them, went to jail, went on hunger strikes and met Lucy Burns.

Paul, who co-founded the National Women’s Party with Lucy Burns, felt an amendment to the constitution was needed.

“She felt without it, women in the South would never get the vote. She knew what she was talking about,” Wirth said.

In 1913, Paul planned the March down Pennsylvania Avenue in Washington, D.C., where between 5,000 and 9,000 people marched in a parade for women’s rights.

Wirth talked about Inez Milholland Boissevain, a suffragist and well-to-do lawyer, who died from pernicious anemia while she was giving a talk out West on women’s voting. “We look at her as the martyr of the Suffragist movement,” she said. Her memorial service was in the U.S. Capitol on Christmas Day 1916.

Lucy Burns, co-founder, National Woman’s Party, was one of the prisoners at Occoquan Workhouse in Lorton, where the conditions were brutal. Women on hunger strikes were force fed through their noses and mouths. “This is what women were willing to do so that we could vote,” she said.

The word leaked out to the national press of their horrible treatment, so in November 1917, the women were transported from Occoquan to D.C. and were released from jail. In January 1918, the D.C. Court of Appeals ruled that their arrests were illegal so they were all freed.

Still, women were not included in the Constitution until the 19th Amendment.

It was President Wilson who went to Congress to say a National Amendment for the women’s right to vote was needed. The House of Representatives voted yea immediately but the Senate waited another 18 months to decide. Thus, began the fight for ratification in 36 states. Ratification came down to one final state: Tennessee. The vote in the Tennessee legislature was 48-48. So, as they were doing the vote count, they got to Rep. Harry Burn, age 26, who had received a note from his mother encouraging him to do the right thing and vote for suffrage. Burn's vote broke the tie in favor of ratifying the amendment. He cast the final vote, giving women the right to vote in 1920.

The ratification of the 19th Amendment led to the largest single one-day increase of potential voters in the history of the United States. It took 72 years to pass and ratify the 19th Amendment, but the Equal Rights Amendment has yet to be adopted to this day.

To donate, or for more information, visit www.suffragistmemorial.org.