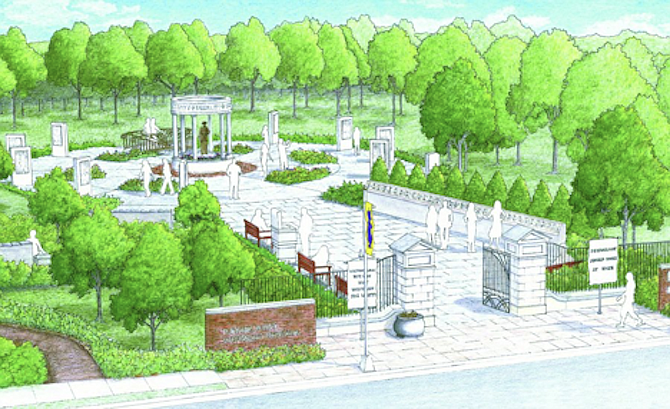 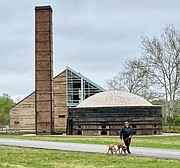 Women are often recognized for putting the needs of others before their own. So it’s ironic that the pandemic, once again, has forced women to take a back seat. Funds have been deferred for a memorial to women’s struggle for passage and ratification of the 19th Amendment, which gave women the right to vote, in consideration of local economic needs.

A memorial, the only one in the nation dedicated to the suffragists, was fully planned and designed, with work begun after ground breaking in November 2019. The site, located in the Occoquan Regional Park, calls attention to the nearby historic workhouse where suffragists’ imprisonment and poor treatment led to a turning point in public opinion about their cause. Early in March, non-profit association organizers were celebrating their success after 12 years of planning and fundraising, with plans to open the site in August in a day-long event. They had accumulated all final pledges to cover construction costs for the memorial, called the Turning Point Suffragist Memorial. A grand opening in August would coincide with the 100 year anniversary of the passage of the 19th Amendment, with attendees and famous personages from across the country.

At about the same time they celebrated, the pandemic arrived in Virginia with its associated economic and social gathering impacts. Significant pledged funding from government entities was soon slated for review in light of obvious revenue reductions related to the health crisis. Those entities will weigh the balance of shortfall needs now against the future revenue income from tourism that the monument is expected to generate.

FINAL BUDGET DECISIONS have not yet been made but other new funding prospects for the memorial look dire. The August opening celebration has been postponed indefinitely.

Although Occoquan Regional Park in Lorton is closed, except to foot traffic, work at the memorial site continues with available funding. Construction workers, wearing protective masks in a nod to health crisis guidelines, prepared wooden forms, checked measurements, and concrete footings were poured for the entrance and wall foundations. Funds on hand will provide for completion of three plaza areas in the next few weeks: the front, middle and round areas. An outline of the layout can be seen imposed on the area. The National Women’s Suffrage Centennial Commission, created by Congress in April 2017, donated three bronze statues being crafted in Utah, which will be included in the monument. The life sized figures depict Alice Paul, co-founder of the National Woman’s Party and author of the Equal Rights Amendment; Mary Church Terrell, co-founder of the NAACP and professor; and Carrie Chapman Catt, President of the National American Woman Suffrage Association and founder of the League of Women Voters. In the open air space, the Memorial’s entrance will replicate the White House gates where suffragists stood as “silent sentinels.” The protesters were called “Silent Sentinels” because they protested without uttering a word, six days a week, for hours at the White House gates. They hoped to draw President Wilson’s attention to their cause: the right to vote for women.

To reduce costs in light of the funding issues and high costs, the modified building plan removes the rotunda in favor of a pedestal, and eliminates water features and a small walking bridge. Without money for an irrigation system, many trees and plants envisioned in the garden-style memorial will not be practical.

THE ASSOCIATION of volunteers managing the monument has expressed hope that additional donors will come forward, but recognize the country, rightfully, has a significant number of challenges now. Construction will move toward completion in a phased approach. They will continue opportunities for donors to leave their mark on this part of history by adding their names to sections of the memorial. Major portions of the memorial still will be completed by August. The opening celebration must await a green light for crowd gatherings that can’t be foreseen at present.

The memorial association’s Executive Director and CEO, Pat Wirth, said, “It took millions of women from every state, creed, race and nationality 72 years to win the vote. Our association will persevere until every single one of those brave, tenacious women is appropriately recognized and honored through this national monument. It will serve as a visual symbol and educational tool to elevate them to their proper place in American history.”

The Occoquan Regional Park location off Ox Road was selected for the memorial for its proximity to the Lorton Workhouse, where suffragists were once imprisoned. After arrest for impeding traffic, the ladies were ill-treated, even beaten and force-fed during their hunger strike over worm-ridden food at the workhouse. News of their poor treatment was key to turning public opinion to favor their cause, and led President Wilson to speak to Congress in support of suffrage in 1918. Congress passed the 19th amendment the following year and its State’s ratification was effective on Aug. 18, 1920.

Achieving suffrage spurned women to organize in support of an equal rights amendment (ERA). Eventually passed by Congress in 1972, State ratification of ERA lagged until Virginia became the 38th State to ratify it in the last General Assembly on January 27, 2020. Constitutional questions remain regarding the timeliness of this ratification and if the ERA process must be re-started.

Readers can learn more about the Turning Point Suffragists Memorial at www.suffragistmemorial.org including history of the movement. Donations and sponsorships for the memorial can be made on-line or at TPSM, 5400 Ox Rd, Fairfax Station VA 22039.