Pat Wirth discusses the history of the Women’s suffragist movement 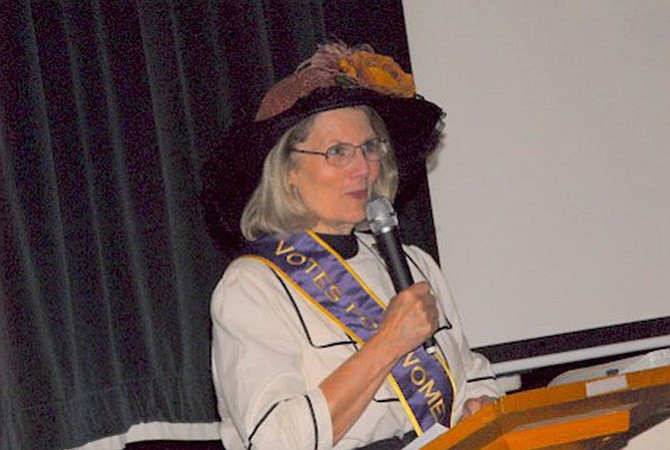 On Sept. 13, Pat Wirth, the invited speaker at the Great Falls Historical Society at the Grange, told the history of the Women’s suffragist movement

About 45 members attended the talk titled “The Best Kept Secret in American History.” It was a sad and poignant story of how millions of courageous and determined women led a 72-year, nationwide struggle to win the right for women to vote that culminated in passage and ratification of the 19th Amendment to the US Constitution in 1920 when Woodrow Wilson was President.

In 1848 Elizabeth Cady Stanton and Lucretia Mott convened the first women’s rights convention in Seneca Falls, N.Y. In 1872, Susan B. Anthony was arrested and physically abused when she attempted to vote and was convicted of the crime of “voting.” She dedicated her entire life to suffrage, but did not live to see it become a reality.

The National American Woman Suffrage Association was led by Carrie Chapman Catt. She also founded the League of Women Voters. The National Woman’s Party was led by Alice Paul, who believed that an Amendment to the Constitution was required. Catt’s initial plan was to win suffrage state-by-state. Catt’s approach evolved in agreement with Paul.

Paul met with President Wilson in early January 1917 pressing for his support for a Constitutional Amendment; she was rebuffed and told that he could do nothing and that it was a state issue. Immediately Paul began scheduling her members to picket the White House from dawn to dusk Monday through Saturday regardless of the weather. In June he began having these “Silent Sentinels” arrested.

Every woman refused to pay the fine levied against them saying they had not broken the law. As a result, hundreds were convicted and jailed.

SCORES WERE IMPRISONED right here in Fairfax County, at the Occoquan Workhouse in Lorton where they were kept in inhumane conditions, fed rotting food and physically and mentally brutalized. When they went on hunger strikes, they were forced fed.

Lucy Burns, who co-founded the National Woman’s Party with Alice Paul, was frequently kept in solitary confinement for months to keep her away from the others lest she cause an uprising.

On Nov. 14, 1917, what is now known as the Night of Terror, Superintendent Whittaker instructed his guards to physically abuse and intimidate a group of 30 women aged 19 to 73 being transferred into his facility to show them “who was in charge.” When word of this egregious abuse leaked by Congresswoman Jeannette Rankin, all of the women were released.

Media pressure together with the D.C. Court of Appeals ruling in January that the arrests, convictions and imprisonment of all these women were illegal, forced President Wilson to go to Congress on Jan. 9, 1018 in support of a Constitutional Amendment. This was the turning point.

The House immediately approved the amendment on Jan. 10, 1918, but it took until June 4, 1919 when the Senate approved the amendment and sent it to the states for ratification. The ratification process was arduous and involved hundreds of thousands of suffragists pounding the pavement and knocking on doors until passed by a single vote in the Tennessee state legislature, the 36th State.

Although it became the law of the land on Aug. 26, 1920 there were years of controversy and many states took decades to ratify the Amendment. The final eight states to ratify were all southern states beginning with Virginia in 1952 and ending with Mississippi in 1984.

PAT WIRTH is the Executive Director of the Turning Point Suffragist Memorial Association. She is raising $2 million needed to build a national memorial to honor and tell the history of those many courageous women who led the fight for their freedom to vote. Their goal is to have the memorial dedicated in August 2020, the centennial anniversary of ratification of the 19th Amendment. The planned memorial has been designed by Robert E. Beach a member of the Fairfax County History Commission, and will be built on land donated by NOVA Parks that is part of the historic prison grounds where suffragists were jailed in 1917. Wirth stated that additional information about the Turning Point Suffragist Memorial and how to make a donation is available at www.suffragistmemorial.org. Wirth can be reached at pwirth@suffragistmemorial.org or 703-201-3171 to answer questions.

This talk was the first of seven speakers on history that are planned for the year. Visit Great Falls Historical Society at gfhs.org, and you can come to hear the other six speakers.