Know Your City: Early Care and Education in Alexandria
Votes

Know Your City: Early Care and Education in Alexandria

A look at the ecosystem serving Alexandria’s youngest. 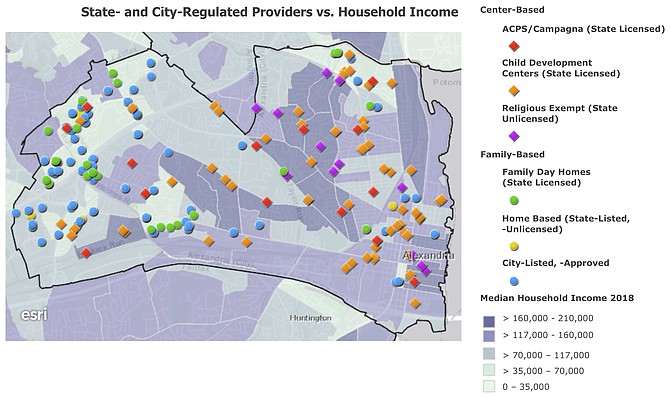 This is the second in an ongoing series to help citizens visualize relevant data, relationships, and trends in the city’s geographic context.

In light of upcoming School Board elections and the public school system’s budget proposal, here’s a limited sketch of the important but complex issue of early childhood care and education.

Much research attests that socialization and learning in the earliest years of a person’s life greatly influence later success. In its Social Genome Model, the Brookings Institute identifies five benchmarks throughout a person’s life that predict economic achievement. The first are “being born to a non-poor, two-parent family” and “being ready for school at age 5” — that is, by kindergarten. In a 2012 report entitled “Pathways to the Middle Class,” Brookings researchers conclude that success — or failure — is a “cumulative process.” They found that “82 percent of children … who enter school ready to learn master basic skills by age 11, compared with just 45 percent of children who were not school ready. Acquiring basic academic and social skills by age 11 increases by a similar magnitude a child’s chances of completing high school with good grades and risk-free behavior.” And so on.

Many factors put children at greater risk. According to Alexandria’s 2015 “Risk and Reach” study: “Socioeconomic indicators such as poverty, maternal education, single motherhood, and teen motherhood place children at risk for multiple negative outcomes such as poor physical health, poor mental health, behavior problems, and poor academic performance.” The study found that risk factors persist disproportionately for non-whites and in the West End and Arlandria.

Various types of organizations, also lopsided geographically, provide early care and education. Virginia’s Department of Social Services (DSS) catalogues providers either as out-of-home “center-based,” which skew eastward, or as in-a-private-home “family-based,” which skew westward. Center-based options include state and federal programs administered by or within public schools, as well as faith-based, nonprofit, and private for-profit providers. Family-based options include state-licensed caregivers working either in their own or the child’s home, and also individuals unlicensed by the state but regulated by the city.

Opinions about the relative quality of these providers vary.

“Child care is driven largely by cost and access to money,” he said. Unlicensed home-based providers — perhaps neighbors looking for extra income — are relatively “cheap,” though in part because they face a lower bar of entry. Licensed providers are often “destination preschools” requiring access to a car, whereas poorer residents may rely more on public transportation. So “the children that are most affected by … limited quality are poor kids. … The ones that are getting high quality are in high-quality, high-income neighborhoods,” he said.

A 2016 nationwide study entitled “Within- and Between-Sector Quality Differences in Early Childhood Education and Care” corroborates Hopkins’ preference. The study found that, compared to home-base alternatives, “the formal [center-based] sector offers higher quality care across a wide variety of program and caregiver measures.” For example, center-based providers more often had degrees or Child Development Associate (CDA) credentials, engaged in regular reading and math activities, and minimized television-watching. Upon kindergarten entry, children from such settings outperformed their peers from home-based settings in both reading and math.

Listings from Virginia Quality, a DSS-maintained voluntary scoring system, and the National Association for the Education of Young Children (NAYEC), an accrediting organization, also indicate an eastward skewing of higher-rated, education-oriented providers.

Yet Dr. Tammy Mann, CEO of the Campagna Center, a nonprofit that administers the federal Head Start program and other services locally, cautions against overgeneralization. Family-based providers are also “capable of delivery quality” and “committed to participating in opportunities that are available to them to help support them and the work that they’re doing,” she said.

Moreover, “[most] of a child’s brain architecture is wired … by the time a child turns three,” she said. Yet “many center-based programs … don’t serve infants and toddlers … because the cost of doing so makes it very difficult. … So we have far more families that actually rely on a network of family child care providers.”

The 2015 Common Agenda — produced by Alexandria’s Early Care & Education Work Group — calls for an integrated “system of early care and education,” including “mixed delivery” and “alignment” across providers. But going about this is no straightforward matter, with different parties taking different views.

ACPS commits to “mixed-delivery model where children are educated in both public schools and community-based programs,” but prefers operating that model in house, according to a statement. “Centralized early childhood programs, such as the Early Childhood Center [ECC], allow for greater collaboration and alignment among programs. In addition to having dedicated staff that are well versed in early development, children and families also benefit from learning experiences that are tailored to their needs.” The ECC, which just opened on the West End, incorporates four programs, including VPI and Head Start, under one roof.

ACPS provides distributed preschool capacity within some elementary schools, and would likely provide more under VPI, but for lack of space and budget. VPI provides state dollars on a formula basis, but requires both available physical seats and matching local funds. ACPS already faces a shortage of elementary seats. Additionally, neither ACPS nor the city provides sufficient local matching funds to realize Alexandria’s full VPI eligibility, said Robin Crawley, early childhood division chief in Alexandria’s Department of Community & Human services (DCHS). For these and other reasons, Alexandria doesn’t utilize 196 — about a third — of its available VPI slots.

For its part, the city government administers several programs, to the tune of $8 million per year, to enhance the city’s array of early childhood providers. DCHS provides financial assistance to families, which “are essentially vouchers for families to buy private services,” said Vice Mayor Justin Wilson. DCHS also offers professional development and training to non-public providers and parents.

Hopkins wants local government to provide more grants to private and nonprofit providers to boost their capacity. Grants would go toward making facility improvements, increasing salaries, etc. In exchange, grantee providers would submit to mandated standards, such as for staff qualifications and curricula. He thinks non-public center-based providers run the best programs, and so governments should “hire that expertise.” As a model to emulate, he points to Washington, D.C.’s Pre-K Enhancement and Expansion Program.

‘[We must leverage] all of our resources, public and private, to help go at making access and quality possible,” especially for children younger than VPI’s four-year-old threshold, she said.