‘E-Day’ on the Horizon in Fairfax County
Votes

‘E-Day’ on the Horizon in Fairfax County 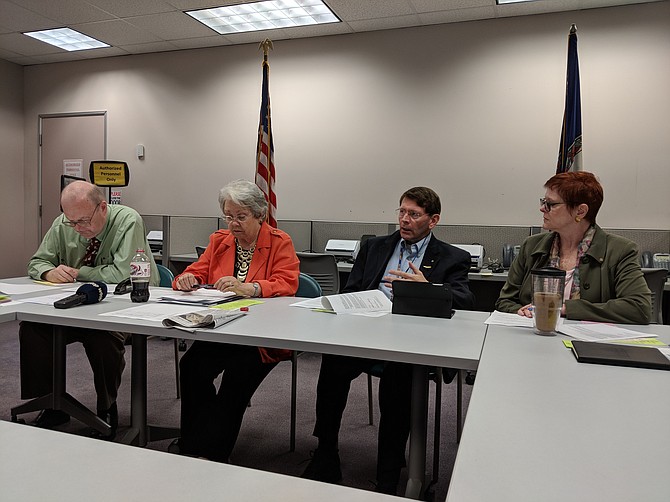 From left: Fairfax County General Registrar Gary Scott, Kate Hanley, Secretary of the Fairfax County Electoral Board, Board Chairman Stephen Hunt, and Vice-Chairman Bettina Lawton host members of the media at a meeting on Sept, 17. Photo by Andrea Worker.

On Tuesday, Nov. 6, voters will go to the polls to choose a United States Senator, representatives for Congress, town officials in Herndon, and vote on several referendum questions.

The Fairfax County Electoral Board held a Media Briefing session on Sept,17 to provide information regarding the election process and voting in Fairfax County. With “E-Day” on the horizon, they want to help voters avoid any confusions or pitfalls that could cause unnecessary inconvenience or even the denial of their vote.

In-person absentee voting for the midterm elections began on Friday, Sept. 21, at the Fairfax County Government Center at 12000 Government Center Parkway in Fairfax and the first mailing of absentee ballots is scheduled to go out on the same date. The Office of Elections is ready, even as they continue preparations for actual election day action.

“Thank goodness we just got the ballots in,” said Electoral Board Secretary Kate Hanley. “They came from New Bern, North Carolina” — a town particularly devastated by Hurricane Florence.

Election officials want to be sure that voters are ready to exercise their right to vote.

To that end, a voter information notice including a sample ballot, precinct locations and other pertinent information is being mailed to both active and inactive registered voters — but that won’t do you much good if you haven’t yet registered to vote.

Hanley reminds that the deadline to register to vote is Oct. 15. To be eligible to register, you must be a citizen of the United States, a resident of Virginia, and at least 18 years of age by the next general election. Voters will need to provide a valid photo ID to vote in person.

New registrants can obtain the voter application form from a myriad of places, including the Elections Office in Government Center, DMV offices, and public libraries. The registration application must then be mailed as instructed to the Office of Elections. Registrants can also apply online at www.vote.elections.virginia.gov. The county reports that 95 percent of voter registrations are now done electronically.

VOTING can be done in person on Election Day, by in-person absentee voting or via a mail-in absentee ballot. There are 20 valid reasons accepted to vote absentee in Virginia and several different time ranges that apply, depending on a person’s circumstances. All of these requirements are clearly outlined on the www.elections.virginia.gov website. If voters determine they meet the absentee voting criteria, the application for the absentee ballot can be downloaded from the site and there is even a video on the site showing how to fill out the application.

“It’s important to realize that the ballot itself is still mailed to you,” said Electoral Board Chairman Stephen Hunt. “Some people just keep hitting the ‘Apply’ button, waiting for the ballot to download. It doesn’t work that way.”

Hunt wants voters to plan for that and give themselves ample time to receive the absentee ballot, complete it, and send it back. As of Sept.17, the county reports having received almost 8,000 mail-in ballot applications. The deadline to apply for a mail-in absentee voting ballot is Oct. 30 at 5 p.m., but that doesn’t leave much time for your ballot to be received by Election Day. Mailed-in absentee ballots are counted on election night in the Central Absentee Precinct.

Regardless of how you plan to cast your vote, the first port of call should be that www.vote.elections.virginia.gov website to check your voter status and to update your information if need be.

Hunt said that there have been instances where address changes or other incorrect information have caused problems for the voter. “Check everything in advance.”

The Government Center Offices will be closed on Oct. 8 for Columbus Day. All locations are closed on Sundays and the hours for each are posted on the county website at www.fairfaxcounty.gov.elections/absentee.

Other than the deadlines, voting requirements, and where to find the necessary information, the Electoral Board members had a few other cautionary notes and reminders.

Some of those reminders were aimed at college students, possibly living away from home on Election Day.

Using George Mason University as an example, Hunt and Hanley said that even though there is a voting poll on campus, students cannot vote there if they are registered elsewhere in the Commonwealth.

“Several hundred denials have resulted from voters attempting to vote at a precinct different from where they are registered,” said Hunt. The chances of being able to race from the wrong polling place to the correct one in time are fairly slim. Mail-in ballots can be sent to any address, but in-person voting must take place where the voter is registered — still another good reason to check your information on the Virginia voter’s website.

Also, said Fairfax County Information Officer Lisa Connors, “remind students to bring stamps.” Lack of access to stamps or a post office was reported as a problem when the county held a college intern brainstorming session this summer.

Hunt also took time to assure residents that while there have been incidents of missassigned voters, every effort is made to avoid those mistakes, including close collaboration with the Department of Motor Vehicles, the county departments involved in geographic information systems, and “a lot of manual checking and double-checking.” Hunt said that even one voter denied their voting rights because of clerical error “is one too many.”

THE BALLOTS are printed with instructions and information in Spanish, Korean and Vietnamese. There are also translators on phone “standby” that can assist voters at the polls.

Also on hand at the meeting was Travis Potter, acting IT manager, and a handout was available on “Voting System Security.” The Electoral Board assures voters that the county’s voting systems have been “rigorously tested … and certified by the U.S. Assistance Commission and Virginia Department of Elections.” No part of the certified system is connected to the internet – no modems, no Wi-Fi capabilities to allow hacking. Elections results are never transmitted but instead, are called into the office.

It’s also important to note that election night results are not considered “official” until county election officers review the machine tapes for every ballot scanner and compare that information with the results reported.

Before the briefing concluded, Hanley updated the media on the board’s position to move the June primaries to the third Tuesday in the month. The board officially adopted this position in July, and sent a letter of recommendation to the Board of Supervisors, the Fairfax County School Board, and the members of the Fairfax Delegation to the General Assembly in August.

Hanley said, “165 of the county’s 243 precincts are located in schools.” Numerous reasons, not the least being the call for increased security at schools in recent times, have convinced the Electoral Board that for the June primaries, it is in the best interests of students and voters to move the date to when most schools have already finished the academic year.

“I think the recommendation is gaining traction,” said Hanley.

For more information about voting, contact the Elections Office of Fairfax County by email at voting@fairfaxcounty.gov, in person, or by calling its offices at 703-222-0776.