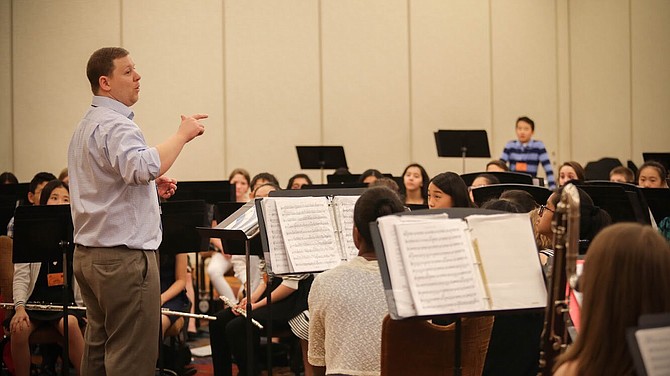 Looking up and listening to their band director, Matthew Baker, Cooper students get ready to play their instruments. Students admired Baker’s dedication to making them the best they could be. Photo contributed

Out of all middle school bands in the U.S. that submitted an audition tape, Cooper Middle School was the first middle school from Virginia to be invited to the 26th annual Music For All National Concert Band Festival.

The Music for All festival was held this year at Butler University. It showed the greatest high school and middle school musical groups in America. Only seventy-one groups were able to participate, and out of those, there were only 7 middle schools, including Cooper. There were middle schools from Hawaii, New Jersey, Texas, and Virginia.

Cooper Middle School’s band was directed by Matthew Baker, and they played striking pieces such as Quicksilver by William Owens, Renaissance Reimagined by Brian Balmages, Albanian Dance by Shelley Hanson, and A Longford Legend by Robert Sheldon. The percussion ensemble also played their own song: Gustav Holst’s Song Without Words from Second Suite in F. “We all practiced so hard and it definitely paid off in our performance,” says Jasmin Chen, an oboist in the Cooper Middle Symphonic Band.