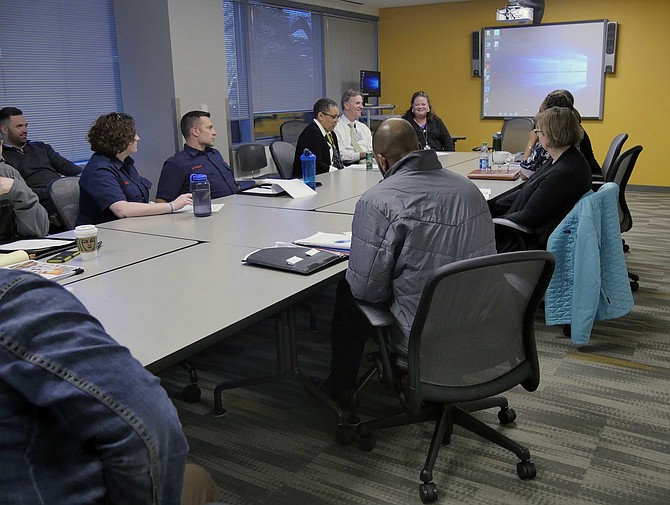 This is the fourth in a series on opioid addiction in Arlington.

Beep beep. It's a 1041 call. Anne Marsh, Fire/EMS battalion chief for the Arlington County Fire Department, said, “We have 45 seconds to get our gear on, 90 seconds response time and 4 minutes to be on the scene." The emergency vehicles roll out the door with lights flashing and sirens on. Marsh supervises seven medic units across Arlington County.

When the trucks arrive at the scene, the medical unit pulls out the stretcher, checks that there are no threats to crew safety and finds the patient. Marsh says when people call in emergencies they often aren't aware of their surroundings and give imprecise directions. "That's why we keep our cool."

The ABCs are to check for an open airway; do the medics need to put in an adjunct? Check for breathing, pulse. Give CPR if there is no breathing. Get the person on a Lifepak, cardiac monitor, IV access. Then she says you determine what intervention to use.

If it has been reported the person took an opioid, you give them Narcan and see if it affects the patient. "You can give it anyway when in doubt, because Narcan doesn't hurt anybody, but is the only known drug to reverse an overdose." Then you load them on the cot and transport them to the hospital and file a report.

Marsh says they have 15,000 EMS calls a year with 10,000 transports. Out of this number last year, 198 were given Narcan, not necessarily all for overdose but some as a precautionary solution and diagnostic tool, since the EMTs only have a few seconds to react. Marsh said, "There are people who think we should do more, like give them a pamphlet, but they don't want to hear it from us — we just ruined their high."

An Arlington resident who is a recovering addict says,”The OD victim doesn't stick around for rehabilitation. He wants to get out of the hospital as soon as he can before the police arrive. They'll just rip out their IV and take off." And probably OD again.

After an OD victim is revived, what next?

The March AARI meeting discussed a wide range of current initiatives including alternative sentencing, a youth-led advocacy group working through targeted ads, a new effort to work in the jails on a pre-release program to offer medically assisted detox, a Care First grant which will allow DHS to expand their outreach and overall opioid response, and Operation Safe Station in Arlington where an addict can show up anytime day or night for help at the office of the Magistrate.

A number of challenges but also a number of opportunities. Somerville said, "Our approach at this point is to open as many avenues as possible and eliminate as many obstacles. Let's make it happen."

But there are a number of obstacles to successful treatment of a drug addict, including finding the people who need help, convincing them to seek treatment, availability and cost of treatment options, and overcoming the powerful addiction that strangles the individual's will to recover.

Somerville said, “The addiction is just so all encompassing, and people often tell me heroin is both their best friend and their worst friend." It takes over and most people don't voluntarily come in for treatment. In addition, if someone in the community overdoses and is revived, you may never know about it. They will probably just go on about their day.

If there is no 911 call, they won't invite the police in. If there is a 911 call, it starts a whole other path where DHS is notified and, "We get them into the hospital to get checked out because they will probably OD again."

Somerville said,"We used to think the hospital was the best time to reach them, but they aren't in the mood to accept treatment at that point, and we learned the hospital is not necessarily the best model. A number of clients tell me they are revived in the back of an ambulance, escape and go get high again with the same dealer because he had really good stuff."

So DHS waits a day and “We will try to track them down and engage them in services." This is not an easy sell. "If we are able to work with a revived drug victim, we evaluate the person and make an individualized recommendation on level of care. We can recommend but we can't force them."

Each client's treatment plan is individualized. A client may begin with detox, either social detox or medically-assisted detox. Somerville says it is important to have medical assistance when withdrawing from opioids in particular. DHS typically encourages individuals to stay 14 days to give DHS time to assess treatment needs, connect the client to appropriate treatment and develop a strong discharge plan.

But there is a debate about the effectiveness of social detox. A recovering addict in Arlington describes the two-week social detox on Columbia Pike as not long enough to make a difference and says addicts usually end up using again pretty soon because of the brain chemistry that has developed in an addict. "It takes 2 years to completely stabilize; even after 90 days of treatment, your thoughts can cause almost a physiological response to craving.”

Other options for county-referred clients include treatment through the 90-day Residential Placement Center (RPC) Early Recovery funded by the county through a contract with Volunteers of America Chesapeake. Residential inpatient treatment is also available through a contract with the private non-profit Phoenix House as well as a six-month transition program called Sober Living at Independence House, also contracted out through Phoenix House.

The county’s Early Recovery program can house 10 individuals and is located in the same county-owned building on Columbia Pike as the Shelter with the detox housing 12-14 beds.

Phoenix House provides residential treatment as well as a continuum of services for substance abuse including evaluation, inpatient residential and outpatient treatment. The Phoenix House residential facility can house 80 men with a special Nuevo Dia section for Hispanics and also Demeter House that can accommodate 20 women.

Clients who are in the county-owned facilities are paid for through county contract dollars. At Phoenix House their client services are paid for by a mix of most major insurance companies, Medicaid, a reasonable self pay and by DHS for county-referred clients. If the client has insurance, it will be billed but insurance often runs out after 30 days.

Tom Walker, chief operating officer for Encore Recovery Solutions, a private treatment center with outpatient services, said, "One of our problems is in such a wealthy area we have few treatment resources in Arlington County. We have fewer resources than in other parts of the country."

Encore Recovery Solutions was established on Fairfax Drive two years ago with a 10-person capacity for in-house supportive treatment of about four months and about 40 for outpatient treatment. Walker says an issue is the needed long-term treatment is often uncovered by insurance for longer than 30 days so people have to pay out of pocket. He says Encore, Phoenix House and Virginia Hospital Center offer the only private options in Arlington County.

Emily Siqveland, assistant program manager, SA Residential Services & Office Based Opioid Treatment for Arlington DHS says information is key to offering treatment alternatives. She says they are looking forward to using the database being developed by SAFE Project which will make available information on treatment options across the United States.

SAFE Project Executive Director Brandee Izquierdo explains Admiral and Mary Winnefeld started this project in November 2017 after they lost their son to an accidental overdose when he had just left Arlington for college in Colorado. "The Treatment Facility Locator, to be launched next week, will list hundreds of facilities around the country and can be sorted according to individual need. The Admiral struggled to find a location for their son and wanted to be sure other people didn't go through the same thing." Their website quotes, “The most important thing we can do is share the lessons we’ve learned and gathered, giving other families the benefit of ‘If I only knew then what I know now.’”

An additional SAFE Project resource is the SAFE Community Playbook, a step-by-step process of how to organize, evaluate and create change in the community to impact the opioid epidemic. Izquierdo explains it is a collection of services around the country with an evaluation of what's working well so that people can be linked to wrap-around services. This is online at https://www.safeproject.us/playbook/

Other local groups have mobilized around elimination of opioid addiction. Ginny Atwood Lovitt who lost her brother to an accidental overdose in Arlington in 2013, established the Chris Atwood Foundation that has been working on Narcan training, outreach and legislative changes that remove obstacles to using Narcan.

Lovitt says her organization is trying to get to people on active addiction, which is different than the rest of Virginia. She explains a formal response team doesn't reach people. “We go out in the community to find people at high risk in homeless shelters, parking lots, funeral homes.” They give a brief Narcan training and Lovitt said, “We tell them your life is worth saving. This may be the first time they hear someone cares and wants them to live. Winning their trust is a challenge."

Lovitt continued, "The sad thing is the way it impacts people's brains. There needs to be a system of complete wraparound services. At any point in the chain if anything breaks, everybody will slip through the crack." She says there are a lot of resources and money, "but they're not all linked.”

Lovitt says her plans are to get more funds to provide better linkage with other services. Now, she says, her organization refers people, links up with peers in recovery, tries to get them into treatment if possible. "But we don't have the funds to do it really well, not enough connective tissue among the programs we have."

The SAFE Community Playbook is a step-by-step process of how to organize, evaluate and create change in the community to impact the opioid epidemic.