Opinion: Letter to the Editor: Build an Alternate Route
Votes

Opinion: Letter to the Editor: Build an Alternate Route 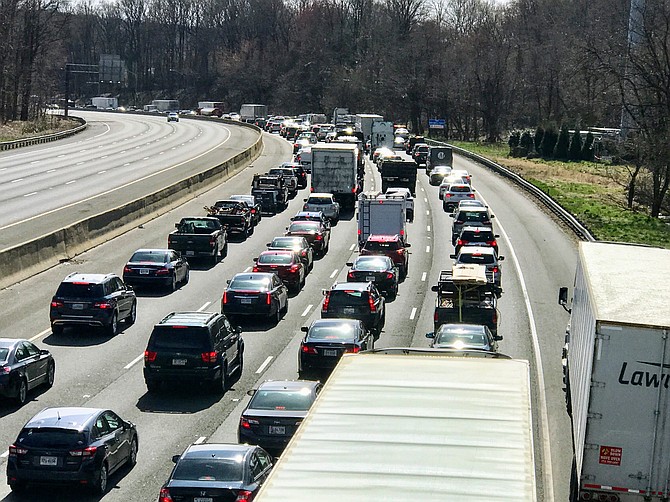 The American Legion Bridge was closed in both directions for hours on March 28 because of an overturned fuel truck. The driver was cited for reckless driving and faulty brakes. Different people come to different conclusions about a sensible response. File photo

In last week’s Potomac Almanac, editor Mary Kimm asserted that we cannot pave our way out of congestion, recommending instead turning to technology for video conferencing and telecommuting. The letter below begs to differ. What do you think? Reply to editors@connectionnewspapers.com

Your opinion piece in this week’s Potomac Almanac on the American Legion bridge accident was so short that it omitted an important part: the logic. “We cannot pave our way out of congestion,” you say.

Actually, we can. Have you been to Virginia lately? While we in Maryland have been sitting idly by, hamstrung by environmentalists and growth opponents like you who prefer to cajole us all to “change behavior and habits,” Virginia has welcomed its population growth and 21st century infrastructure needs by building new express lanes and toll roads. It has generally kept these new roads within the footprint of its existing highways, and has not caused much displacement of additional land and natural habitat. Meanwhile, new business flocks to Virginia, while Maryland watches with envy and talks about mass transit, purple lines and bus routes.

Where would we be if Dwight Eisenhower had said “we cannot pave our way to prosperity” and decided not to build the interstate highway system? Of course we need a new bridge over the Potomac. It’s years overdue. It may not have completely solved last week’s problem, but does anyone seriously doubt that a second option for motorists would not have helped enormously?

Opinions like yours retard Maryland’s progress and keep us stuck in the past. That’s frustrating to those of us who want to see Maryland thrive and remain competitive for our children.