How will Potomac environment, houses and land be impacted? 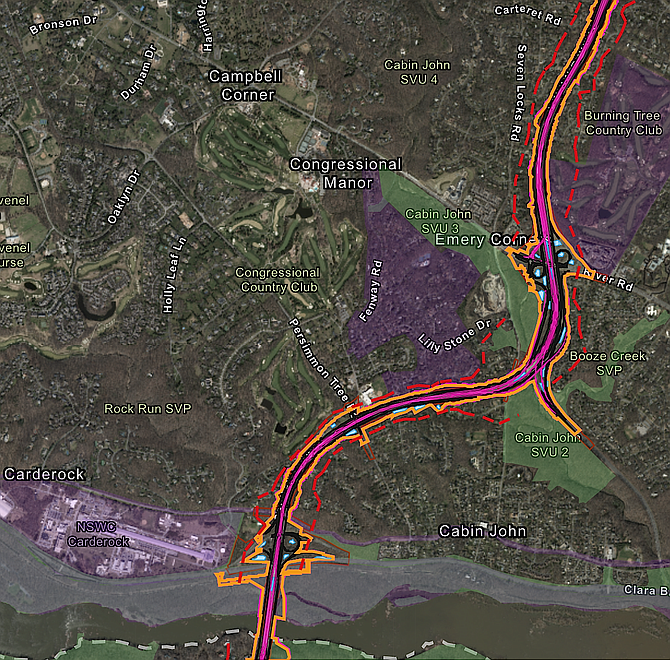 An interactive map shows sunny projections of how small the disturbance could be while adding four toll lanes to the Beltway and American Legion Bridge. Screen shot from MDOT I-495 & I-270 Managed Lanes Study

Governors Larry Hogan (R-Md.) and Ralph Northam (D-Va.) pledge their plan for the widening of the American Legion Bridge and privatized toll lanes won’t require much disruption to Potomac neighborhoods at all.

“This is an immediate threat to all of those who live anywhere near where the new lanes will be built,” said Susanne Lee, president of West Montgomery.

West Montgomery hosted its regular meeting at the Potomac Community Center last week to alert the public on the potential project that the governors are attempting to fast track before the General Assembly begins its 2020 session on Jan. 8, 2020.

“Have we learned nothing since the Bridge was built and the Beltway opened over 50 years ago,” said Lee.

“Study after study documents that where new roads are built or old ones expanded, they just encourage more driving and more development and are soon filled to capacity,” said Lee.

Brad German, co-chair of Citizens Against Beltway Expansion, urged West Montgomery members and Potomac residents to get involved. “What we need is transparency, transit and taxpayer protection in the cause of congestion relief,” said German.

CABE is holding a civic rally at the Silver Spring Civic Center on Monday, Dec. 16, after the Almanac’s presstime, to try to stop the $14 billion project.

“Demand the release of origin and destination data, traffic and revenue projections, and other environmental and fiscal impact date needed for a fair and independent analysis of the governor’s proposal,” said German.

BUT CONSTRUCTION COULD BEGIN in 2021 if the governors successfully implement their plan for widening the bridge and privatizing toll lanes.

“The American Legion Bridge has been operating beyond its capacity for nearly four decades,” said Hogan and Northam. “Daily traffic has grown 390 percent since the bridge opened in 1962, with 235,000 vehicles using it daily. More than 40 percent of the region’s population travels this segment of the Capital Beltway, and the region expects to grow by another 1.2 million people by 2040.”

ENVIRONMENTALISTS have “grave concerns” over the proposal.

They called Hogan and Northam’s pitch and plan announced on Nov. 12, 2019 “a flawed process.”

“We encourage you to refrain from rushing the process until the appropriate procedures are followed, the environmental impacts studied and alternatives to vehicular transit are seriously considered,” they wrote in a joint letter to the governors on Nov. 15, 2019. “We ask you to fulfill your legal obligations and give full consideration to these important environmental and quality of life concerns.”

“When you get a transit mode that is reliable, people are going to use it,” Eisinger said at the West Montgomery meeting.

Eisinger explained his pitch for monorail to be implemented first from Frederick to Shady Grove, then to Bethesda, and possibly down the road. Construction can mostly be done offsite, it takes less time to build, rails would be implemented into the existing right of way, and it’s more cost effective, he said.

“On this particular segment of 270, this is a no brainer,” he said. “If we can build it in this segment, it’s going to go into other places.”

Byron Bloch, a West Montgomery member and an auto safety expert who listened to Eisinger’s alternative, lived through the widening of highways in Los Angeles.

“I saw the incessant widening of more and more freeways and it was strangling us. It has encouraged more traffic on the widened roadways and it is insane,” he said

“I want to fight for the monorail system. I fully support this. We need this,” said Bloch. “It is much more intelligent than paving the way for much more vehicles and asphalt. For our present and future generations, this is the way to go.”