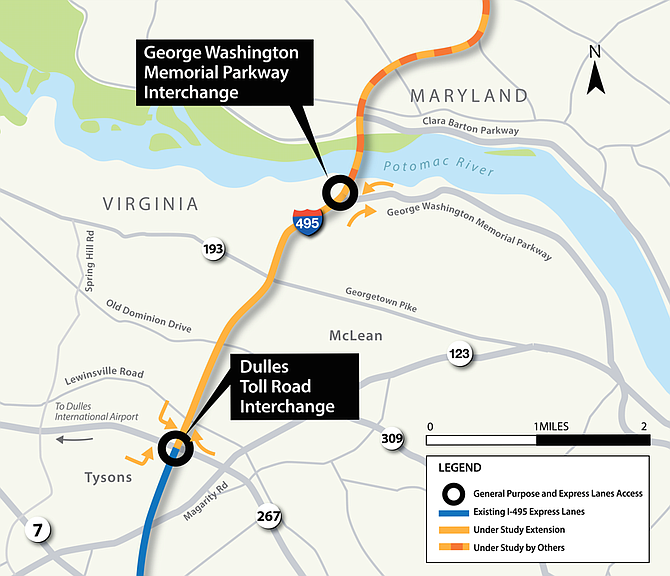 I-495 Express Lanes Northern Extension Project (“495 NEXT” or “Project”) is a 2.5-mile extension of the 495 Express Lanes north from the current terminus near the 1-495 and Dulles Access Road interchange and to the vicinity of American Legion Bridge. Two new express lanes will run in each direction. www.p3virginia.org/projects/495-next/

Fairfax County continues to pressure Maryland to widen or replace the American Legion Bridge, two miles at a time.

Fairfax County’s Board of Supervisors Tuesday, April 13 voted to endorse the 495 Next project. The project involves extending the I-495 Express Lanes approximately two miles, from the end of Virginia express toll lanes by the Dulles Toll/Access Road to the George Washington Memorial Parkway interchange at the American Legion Bridge. Two new express lanes will run in each direction.

“The American Legion Bridge does have to have something done with it and the state of Maryland is responding much better than they were before. I’m confident by this action we will be moving the entire region forward in regard to transportation,” said Fairfax County’s Mason Supervisor Penny Gross.

“The Board continues to strongly encourage VDOT to coordinate with Maryland to minimize the time between the opening of the I-495 NEXT express lanes and Maryland's managed lanes. We remain concerned about the possibility of project rejection or delay by Maryland, and the impact either delay would have on roadways in Fairfax County,” according to the Board’s letter to Virginia Secretary of Transportation Shannon Valentine.

Providence Supervisor Dalia A. Palchik said Tysons is projected to have 100,000 residents and 200,000 employees by 2050. “Tysons growth requires a transit system that can handle the pressure,” said Palchik.

“For many years, I have supported widening or replacing the American Legion Bridge because I know it is important to our residents and it’s important to our economy,” said Foust. “But I honestly believe that until Maryland replaces the bridge and widens its side of the Beltway, 495NEXT provides those who can afford to pay the tolls a way to cut in line and arrive a few minutes sooner to the congestion at the bridge while adversely impacting everyone else.”

Without the Maryland project, he said, 495NEXT worsens traffic in the general purpose lanes, harms McLean intersections, and “permanently destroys parks, trees, streams, public and private property all to accommodate construction.”

“These adverse impacts are far greater than any public benefit from building a little more than two miles of an extension to an existing toll lane,” said Foust.

But Springfield Supervisor Pat Herrity said the county has already negotiated good deals for the construction and financing of the project and would be making a mistake to halt construction of the two mile project as it waits for Maryland.

“So often we end up in a situation of, ‘You go first. No, after you. No, you go first.’ And we end up spending an awful amount of time spinning our wheels, and getting nothing done, or taking so very long to get something done, that people who were part of it from the beginning aren’t around any more. We really can’t allow that to be the situation here,” she said.

According to Fairfax County documents, Virginia officials assert that Maryland “expects its managed lane system to be operational in 2027,” approximately two years after completion of the 495 NEXT project.

“There’s no guarantees but we’re as close to a guarantee as we can that Maryland is making significant progress,” said Chairman Jeff McKay.

IN MARYLAND, hundreds of people testified against Gov. Larry Hogan’s proposed public-private partnership to build toll lanes – nearly 83 percent of commenters voiced disapproval – but the Maryland Department of Transportation chose the option to add four toll lanes to the American Legion Bridge, around part of 495 and up I-270 as the best choice to mitigate traffic congestion. The study also shows that drive times would worsen on parts of 270 near the toll lanes’ end.

MDOT made its announcement choosing an alternative on Jan. 27, 2021.

“In addition to delivering significant congestion relief in the existing free lanes, this Recommended Preferred Alternative provides Marylanders with new travel options including free use of the new managed lanes for carpoolers and transit riders, new bike and pedestrian connections in the community and across the Potomac to the C&O Canal, and a consistent reliable transportation network for the entire National Capital Region from Maryland into Virginia," said MDOT Secretary Gregory Slater.

Brown encouraged the Department of Transportation to pause and reconsider the implications of the project on the region.

“This project will do little to address the sources of congestion in the long-term. Modern transportation planning shows that road-widening only induces demand, limiting the benefit of extra roadway. The best way to address the Capital area’s traffic problems is to create options to take cars off the road, with public transit and other solutions,” wrote Brown. “Building additional roadways only encourages people to drive and does not address the source of traffic.”

Brown pointed to Virginia as a reason to think differently about transportation options. “The experience of Virginia shows that these tolls can be upwards of $40 a trip, far from an equitable price point,” he said.

The pandemic has also changed traffic patterns. “The context of the COVID-19 pandemic cannot be ignored when considering a project of this scale. Movement patterns have changed considerably as a result of the pandemic, and it is unclear what the lasting impact on the future of commuting and travel will be. Notably, a recent report found that the Capital area saw the largest decrease in traffic delays of any major metropolitan area in the country, at 77%. Another regional survey found that after the pandemic ends, 57% of employers in our area plan to continue telework at pandemic levels or increase it from pre-pandemic levels,” said Brown.