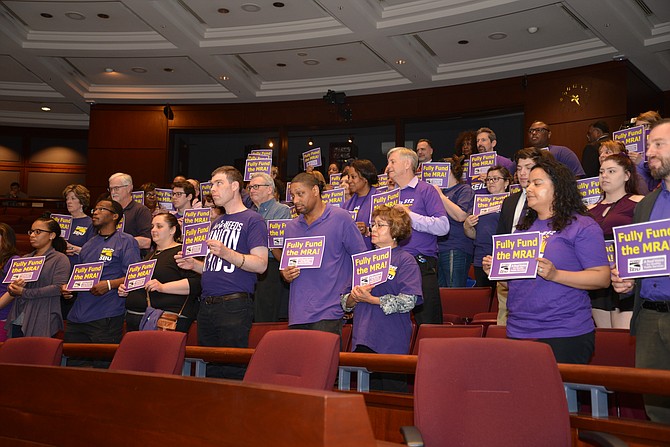 Showing their support for a 2.5 percent Market Rate Adjustment for county employees: Dozens testified at the budget public hearings, expressing disappointment that only 1 percent for the MRA was included in the Advertised Budget by County Executive Bryan Hill. Photo by Andrea Worker. 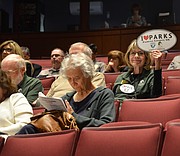 A contingent of supporters of Fairfax County parks attended the budget hearings, praising the current support of the board and encouraging future funds and endorsement.

It was all paws on deck at the Fairfax County FY 2020 Budget Hearings. Jamie accompanied Dr. Amrit Daryanani to advocate for Animal Control officers, who are “sworn officers, with the same training as other police personnel and who face equally emotionally charged situations. They need a living wage to live here in Fairfax County where they work,” said Daryanani.

Hallelujah! Finally something to sing about during the Budget Public Hearings. Musical director David North of Oakton brought a portion of his Mosaic Harmony choir to illustrate the power of music and song as he thanked the board for their support of the Arts in Fairfax. North got board members on their feet and clapping along with the choir.

On Thursday, April 12, at 4:27 p.m., Fairfax County Board of Supervisors chair Sharon Bulova brought down the gavel that ended her last Budget Public Hearings — a circumstance not lost on many of the 150 or so speakers who addressed the board over the three days of public testimony.

Most of the speakers, even those who attended to express objections to County Executive Bryan Hill’s Advertised Fiscal Year 2020 Budget, took part of their precious allotment of speaker’s time to thank Bulova and fellow retiring board members John Cook (Braddock), Cathy Hudgins (Hunter Mill) and Linda Smyth (Providence).

The proposed budget was presented to the board by the county executive on Feb. 19, without seeking any increase in the current residential tax rate of $1.15 per $100 of assessed property value. Even without a tax rate increase, the average homeowner’s tax bill would still rise by approximately $150, since the average residential assessment would increase by almost 2.4 percent because property values are increasing.

Since then, there have been numerous town hall budget meetings around the county, allowing residents from the nine magisterial districts to hear more and ask questions of county staff and their own district supervisors.

THE PUBLIC HEARINGS began on Tuesday, April 9, around 4:30 p.m. just after regular board business was concluded. Over the course of three days, there were dozens of pros and cons argued in regards to the overall budget of $8.86 billion.

Representatives from unions, councils, organizations, civic associations, social services, nonprofits, parks, environmental groups, and private citizens came before the board. Most were there to bring light to their cause and to request additional financial support, or reconsideration where funding had been cut or reduced.

Fairfax County Public Schools (FCPS) Board chair Karen Corbett Sanders was the first speaker of record, providing lengthy testimony describing the achievements of the school system and its importance to the welfare of the county, thanking Hill for a budget that includes the FCPS full funding request, and urging the board to vote their approval when the final budget comes before them on May 7.

The $2.35 billion transfer to the school system, up more than $86 million over last year, comprises almost 53 percent of the county’s general fund budget. The total number of students in the school system for 2018-19 was 188,018, about 1,000 students fewer than projected.

Kevin Hickerson, president of Fairfax Education Association (FEA), and Kimberly Adams, the president-elect of FEA, were pleased that the budget included the full amount of funds requested, to include wage increases for teachers, but expressed concern that the funds would not allow such increases for support personnel.

The Fairfax County Council of PTAs also supported the Advertised Budget and applauded the new era of collaboration between the FCPS School Board and the county, but urged the board to “think into the future.” In her testimony, Council President Jane Miscavage said the needs of the county’s schools were only growing, especially in the areas of “special education where we face a shortage of teachers, in mental health issues among our students, in the areas of safety and security and in the need to reduce class sizes, to name just a few.” Miscavage says that today’s budget responses are promising, but will fall short of future needs. “The time to plan is now.”

Miscavage and her colleagues offered their assistance “in any way we can. Put us to work, let us share the load. We are a large organization with a large network with other PTA’s. Tell us how we can help you.”

Others who support the school’s piece of the budget pie asked for funding beyond wages, reporting that schools in the county need physical improvements and upgrades to maintain the premier status of education that is conducted within their walls.

Tina Williams with the Federation of Teachers urged the board to find the means to fund universal Pre-K, and to restore pay rates for substitute teachers.

ARTHUR PURVES, representing the Fairfax County Taxpayers Alliance, presented an argument against the monies directed toward the FCPS, saying that school and other county employees earn more than the average private sector worker in the region and “without such a generous pension and benefits package.”

Purves questions why the school system needs $114 million more to “serve 1,000 less students in the coming year.” He presented several statistical charts to defend his statements that Fairfax County schools “are not providing the education they say they are. Where is the excellence [in the SAT-related numbers he offered]? Where is the equity?”

Purves says that studies show the educational achievement gaps for minority students that exist by their senior year, are present when tested for in the fourth grade. He suggests the use of the Montessori system and a return to an abandoned instructional method called DISTAR to alleviate the situation.

“The One Fairfax directive should focus on fixing our educational system from Pre-K through third grade where the problems really begin.”

The other “elephant in the room” as it was described by Randy Crueller, vice chair of the Fairfax County Employee Advisory Council, is the gap between the expected 2.51 percent Market Rate Adjustment for county employees, including law enforcement and first responder personnel, and the actual 1 percent MRA included in Mr. Hill’s budget.

Crueller was joined by numerous representatives of Fairfax County employees of every level and every job description in denouncing this decision. Even candidates seeking to fill the seats of the outgoing board members’ seats — like Alicia Plerhoples, who has set her sights on the chairmanship of the board, and James Walkinshaw, running for Braddock District Supervisor — expressed support for a fully funded MRA in remarks for the record.

Plerhoples and Walkinshaw were also just two of dozens who hammered home the need for more affordable housing in Fairfax County.

Mary Paden, chair of the South County Task Force for Human Services, warned the supervisors that “gentrification” could push many lower income residents out of the county “that they work in and that their tax dollars have helped grow,” especially in areas like the Route 1 corridor. Paden says all of the expensive efforts to improve the area, widening Route 1 and investing billions in local development will “certainly benefit some, but harm many more without equal investment in affordable housing.”

Members of the Community Action Advisory Board echoed those concerns, including Elethia from Reston. “I am a CAAB member, but I speak for myself today,” she said. Elethia is worried for the county’s senior residents like herself, who more and more are being forced to sacrifice other essentials in order to pay for housing.

On the topic of funding legal services for immigrants in detention, the speakers were often passionate in their views.

Several groups and individuals pleaded for the $200,000 to fund such legal services, while others strenuously objected to using taxpayer’s dollars to provide services they say are not offered to legal residents and citizens of the county.

The public hearings are over, although there is still time for residents to make their opinions known via the county’s website. The Board of Supervisors Budget Committee meets on April 26 to discuss possible changes to the proposed budget, then will hold its budget mark-up meeting on April 30 before final adoption at the board meeting on May 7.