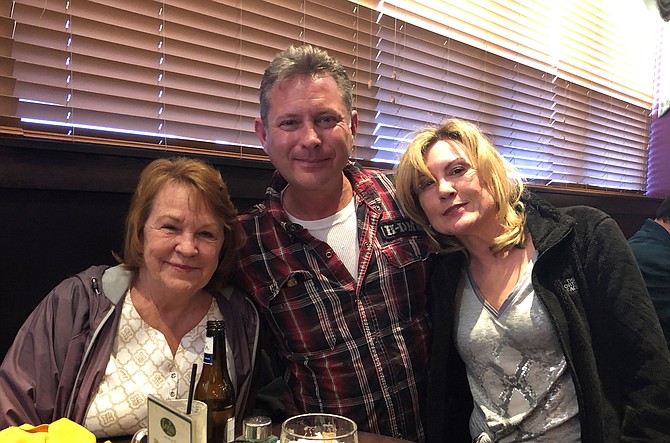 Jim Fowler, with his wife Patty, right, and mother-in-law Eileen Samuels, celebrates his retirement from the Alexandria Police Department April 1 at Fiona’s Irish Pub in Kingstowne. Fowler served 25 years on the force, the last 12 on the motorcycle squad. Photo by Jeanne Theismann. 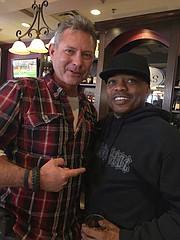 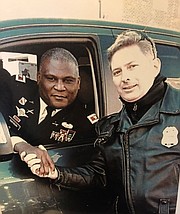 Officer Jim Fowler, right, in an undated photo with Col. Gregory Gadson, then the Garrison Commander of Fort Belvoir. Fowler retired April 1 after 25 years with the Alexandria Police Department.

Surrounded by family, friends and fellow officers, Jim Fowler celebrated his retirement from the Alexandria Police Department April 1 after 25 years serving the City of Alexandria.

Fowler spent his last 12 years as part of the APD motorcycle force and the crowd gathered at Fiona’s Irish Pub in Kingstowne wished him well on his newest venture, Slick Sledz, a custom motorcycle building company.

“My time with the department has been incredible,” said Fowler. “But now I’m looking forward to spending more time on Slick Sledz.”

Fowler spent six years serving in the U.S. Coast Guard as a weapons specialist. His last duty station brought him to Alexandria, where he joined the APD in 1994. He is involved with various veteran’s organizations, particularly those serving disabled veterans.

Fowler holds a bachelor’s degree in Administration of Justice from George Mason University but his love of motorcycles led to his creating Slick Sledz, a business he started in 2015 while still serving full time on the force.

“Now that I can spend more time with Slick Sledz, I hope to see it continue to grow,” said Fowler, who is a certified Harley Davidson technician. “I can’t thank my family and friends enough for all their support.”