New York Gilbert and Sullivan Players’ musical cabaret “I’ve Got a Little Twist” On Saturday, May 4. 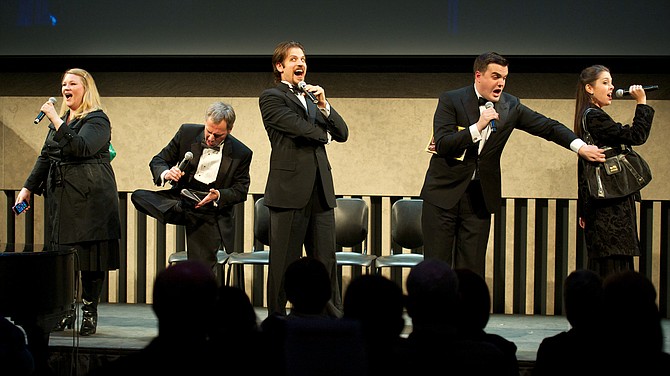 The cabaret evening will feature ingeniously rewritten lyrics for G & S tunes, often alongside contemporary Broadway show tunes while other times the classic Gilbert and Sullivan repertoire is left intact. The show aims to speak to both those who know their Gilbert & Sullivan and those new to the extensive G&S catalog.

“We scheduled the New York Gilbert and Sullivan Players in direct response to the continual audience requests for ‘more musicals,” said Sarah Schallern Treff, Performing Arts Director, McLean Community Center. “Alden audiences will particularly love ‘I’ve Got a Little Twist’ because of its variety and ingenuity. It’s a musical theatre journey that takes the audience from G&S through ‘Spamalot’ and visits Cole Porter, Sondheim and other modern composers along the way.”

Asked why audiences flock to Gilbert and Sullivan performances more than a century after they were first performed, Schallern Treff said: “You mean other than the fact that they’re awesome? I think that silly Gilbert and Sullivan brand of comedy is timeless and intergenerational. Combine that with catchy and beautiful music, and you’ve got a winner. And the established tradition of updating Gilbert’s words make G&S more topical and relatable to modern audiences.”

The British Gilbert and Sullivan are “part of the cultural vernacular. People may even know it. Are you a ‘Curb Your Enthusiasm’ fan? Then you’ve heard G&S underscoring some of the shenanigans. Ever broken into ‘Hail, Hail, the Gang’s All Here’ at a party or pub? You’re singing G&S!” added Schallern Treff.

The evening with the New York Gilbert and Sullivan Players and their “I’ve Got a Little Twist” is “something that high school theatre nerds and their Gilbert and Sullivan-loving grandparents can bond over,” noted Schallern Trett. “Do not miss it! You will hear things you never knew you would love, gain new appreciation for the art form, and have a blast.”