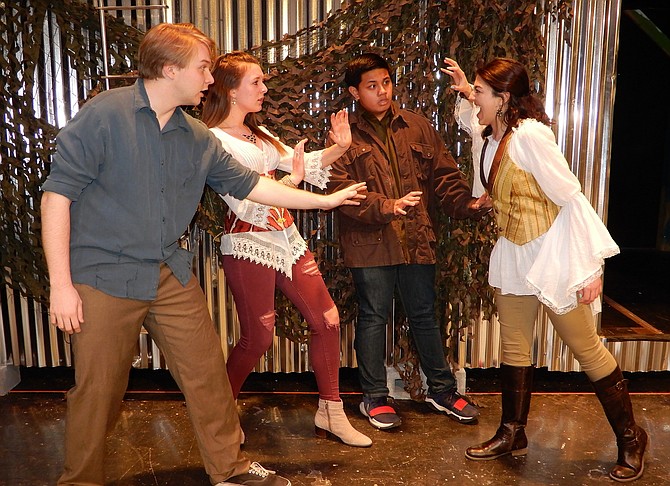 Shakespeare comes to the local stage when Chantilly High presents the classic comedy, “A Midsummer Night’s Dream.” The cast and crew of 65 have been rehearsing since February, and Director Andy Shaw double-cast the play “because we had so many talented students who deserved to be in this show.”

The curtain rises Wednesday-Saturday, May 1-4, at 7 p.m. Tickets at $12, adults, and $10, students, at the door or via chantillyhsdrama.com.

The story is about four misguided lovers. Lysander and Hermia want to marry, but Demetrius loves Hermia, too, and her parents approve of him and not Lysander. Meanwhile, Helena loves Demetrius, but it’s unrequited.

THEY ALL GO into a forest, where the forest spirits put a love potion on their eyes and meddle with their relationships.

However, Shaw put his own twist on this play by placing it in post-modern, futuristic, Athens, Greece. “There’s magic happening, but I wanted this to feel more contemporary and relevant to the audience,” he said.

So although the scenes take place in a palace and a forest, the costumes were inspired by “The Hunger Games” movies, “The Walking Dead” TV series, plus Steampunk. And the story’s three main groups of people – the lovers, fairies and mechanicals (the common workers) – are dressed accordingly.

“Things are going well, and the cast is having fun,” said Shaw. “People who’ve only read Shakespeare will be surprised to see how active it is onstage. One of the hardest things for actors is to make sense of the language. But they’ve all put in the time – even outside of rehearsal – to really learn and understand what they’re saying, and they’re doing an amazing job.”

“In the long history of Chantilly theater, it’s the first time we’ve done Shakespeare as a mainstage production,” continued Shaw. “The audience will enjoy all the physical comedy, the variety of different and interesting characters, plus the three different interwoven plots. There’s a romance, bickering married fairies and a group of common, everyday people – the mechanicals – trying to put on a play.”

Senior Jared Belsky portrays Lysander, a wealthy citizen of Athens. “He’s lovey-dovey and respectful to Hermia and is a good guy, likeable, witty, friendly and a smooth talker,” said Belsky. “This role is fun because I play Lysander – both when he’s in his right mind, and after he’s been possessed by the love potion – and show the difference. For example, when under the potion, he’s a lot more over-the-top and comical.”

Since this is a lighthearted comedy, Belsky said, “It’s fun seeing how the characters interact onstage. And the audience will enjoy the hilarity that ensues as the lovers are toyed with by the spirits and the magic in the forest.”

Playing Titania, the Queen Fairy, is junior Molly Marsh. “She bounces around the world looking for whatever will help her and her husband Oberon, the King Fairy [played by David Porter], keep nature in balance,” said Marsh.

“She likes to have things go her way,” continued Marsh. “And when she doesn’t get what she wants, she’ll do whatever it takes to get it – even manipulate and seduce people. She’s aware of the power she has over men and nature and often uses that to her advantage.”

She, too, likes her role. “Titania doesn’t care what anyone thinks, and she can be headstrong with Oberon.” explained Marsh. “But when she’s under a spell and falls in love with a donkey, she becomes giggly, but is still confident. So it’s funny to see this strong woman fawning all over this donkey – who has no idea what’s going on.”

Marsh said the audience will like Chantilly’s different take on this Shakespeare classic. “The scenery is unusual because the show’s set in a post-apocalyptic world,” she said. “There are broken-down buildings with overgrown weeds and muted colors. So it’ll have a magical atmosphere, but will also be grungy. And people will appreciate our ability to interact with the set in a high-energy way.”

Senior Anna Rhodes portrays Helena. “She’s insecure and unsure of herself,” she said. “She struggles with self-confidence because she’s in love with Demetrius, but he doesn’t share her feelings. And although everyone else sees her beauty, she thinks she’s less beautiful than her best friend, Hermia, who Demetrius loves. She’s also kind and caring and, like me, puts others above herself.”

Rhodes said her part’s challenging, but she likes it. “The amount of lines and scenes I’m memorizing in Shakespeare’s English makes it difficult,” she said. “But I’m acting with many of my close friends. And the character has made me think about my own self-esteem and confidence, and I’m learning not to compare myself as much to others.”

She said the audience will particularly love this production’s technical elements. “The set is very detailed and interesting to look at,” said Rhodes. “And the costumes are beautiful. When I first saw the designs, I was instantly in love with them. My costume is burgundy jeans, tall brown boots, a flowy white blouse and a burgundy corset.”

SENIOR Mallory Bedford plays Puck. “He’s a creature of mischief – a sprite that’s part of the fairy world,” she said. “He lives in the forest, but can travel around the world and mess with people’s lives – and not just those who venture into the woods, but average people, too.”

She said Puck is charismatic, playful and energetic and likes pulling pranks on people for his own entertainment. “But he messes up and accidentally puts the love potion on the wrong person’s eyes,” said Bedford. “He can’t help but cause things to go wrong, even when trying to help.”

Enjoying her role “immensely,” she said, “It’s been fun working with Mr. Shaw on ideas for the character and production. Before auditioning, I created a presentation and told him how these things could fit in. And playing Puck allows me to explore this onstage.” A rule-follower in real life, Bedford said acting lets her “make the stage my own. I get to play around with my character and castmates in a way I’m not able to, normally.”

Overall, she said, “When you think about high-school, Shakespearean productions, you picture kids standing in stiff costumes and saying words they don’t understand. But in this one, we’ve focused on what Shakespeare’s trying to say, and why and how the words inform the characters’ personalities. Instead of just spewing monologues, we know why we’re saying these things.”