From the Field to the Universe
Votes

From the Field to the Universe 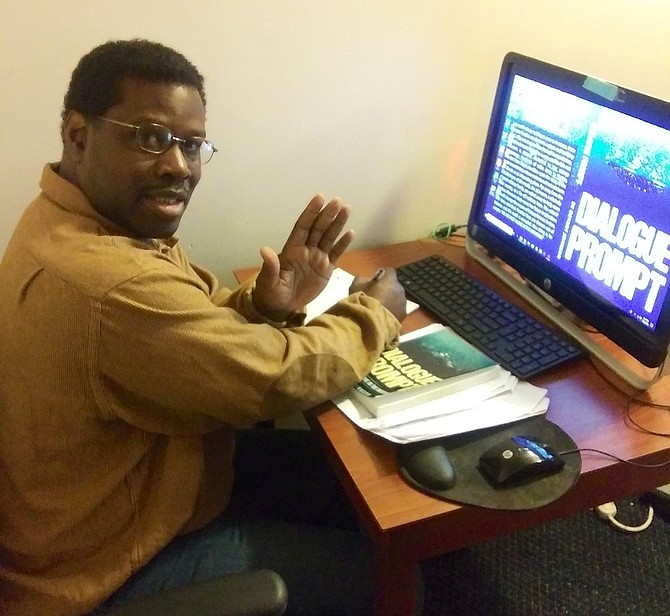 A former Reston resident, Herndon High School alumnus, and athlete, Bryant (Barry) F. Johnson has a new story to tell, one not on the field but out of this world.

Johnson is the author of “Dialogue Prompt: WE ARE NOT ALONE IN THE UNIVERSE!” a sci-fi novel available in hardcover, paperback and audio.

"This is the first book in the series and the second book comes out early August," said Johnson. In an interview, Johnson looked back on his personal experiences and writing processes, the impact of science fiction on young people and his book and who his favorite science fiction writers were.

"My mother had a big influence, very adventurous and kept us with cool morals.” And since his father was a movie buff and an actor, "He got us watching movies, lots of science fiction,” said Johnson. While at Herndon High School, Johnson's English teacher, Mr. Evan Dubin, also made an impression. Dubin recited poetry before class and during class had the students dissect sentences, identifying each word and the function it served, Johnson said.

AS FOR THE WRITING PROCESS, Johnson recounted that his father was an officer in the Army; the family traveled to many bases both in the United States and overseas. Johnson later wove the settings of his family's travels into his novel "evoking authenticity."

Johnson said his characters were a combination of people he met, which lent "an instant relatability." He based his characters upon the first-hand accounts people in the military shared with him, although he asked their permission to use their stories. Name selection for the characters was simple; what fit. "Marc Dazet I thought would be a great reporter name," said Johnson.

When he completed a draft of “Dialogue Prompt: WE ARE NOT ALONE IN THE UNIVERSE!,” he went back and edited things out. "Things that were too much; things I exaggerated. There was one part of the book about the Lenape (Native Americans). I had to research their tribe. I did not want anyone from the tribe to read it and not have it right," he said.

Johnson acknowledged writing energized him."I like coming up with different ideas; how it flows. I try to think of it as a math problem," he said. Asked about writer's block, Johnson replied emphatically, "Yes. Yes. Yes."

Johnson said his solution is, “National Novel Writing Month, NaNoWriMo-For the Writer in all of us,” where he unleashes his inner writer. "This is where you write a 50,000-word novel in one month. It happens every November."

"We are just at the beginning. Science fiction is the trend. It's making its way more and more into our lives. What was in science fiction movies before is now real. We all own cell phones; Kirk did. I think it is going to be more and more. As I research things, I'm learning. YouTube's Secureteam, (a source for alien and UFO-related videos, leaks and information), has a big following."

FINALLY, Johnson named the best science fiction. "Douglas Adams- The Hitchhiker's Guide to the Galaxy, Michael Crichton -Jurassic Park and Westworld, Suzanne Collins-Hunger Games, Ernest Cline-Ready Player One, and J. K. Rowling. I like the person she is from her interviews. She started from the ground up, rejected by many publishers and now is a household name," said Johnson.

Bryant F. Johnson is a writer by profession and currently lives in Hampton, Va.