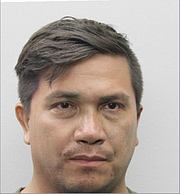 Fairfax resident Cesar Laragaibort, 37, has been charged with one count of aggravated sexual battery. He was arrested Aug. 2 by detectives from the Fairfax County Police Department’s Major Crimes Bureau’s Child Abuse Squad.

According to police, detectives were contacted Aug. 1, after a child reported being inappropriately touched by Laragaibort. Police say they were able to “corroborate the allegation and develop sufficient evidence” to arrest him.

At the time, Laragaibort was a counselor and bus driver at Camp Greenway, a summer program operated by the Madeira School in McLean. However, say police, the child wasn’t affiliated with the camp. Furthermore, they say, “Initial evidence does not indicate the alleged offense occurred at Camp Greenway or on any school buses.”

But detectives would like to hear from anyone who’s concerned that their child may have had inappropriate contact with Laragaibort. Anyone with information should call the Major Crimes Bureau detectives at 703-246-7800.

As for Laragaibort, following his arrest, he was taken to the Adult Detention Center and held without bond.