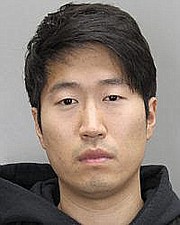 Fairfax County police have charged a 29-year-old teacher at Fairfax High with indecent liberties by a custodian (meaning a person in a position of trust). He is Daniel Kim of Oakton, and police say he had an “inappropriate sexual relationship” with a student at the school.

A math teacher, he was in his third year of teaching at Fairfax. Detectives from the Major Crimes Bureau Child Abuse Squad arrested him last Wednesday evening, Nov. 20, at his home.

According to police, the detectives began their investigation into his alleged, illicit actions after a student reportedly disclosed information about unlawful sexual conduct with Kim within the past two months. Victim specialists from the Police Department’s Major Crimes Bureau’s Victim Services Division were then assigned to ensure that the alleged victim is receiving appropriate resources and assistance.

Following his arrest, Kim was suspended from his teaching position and held in the Adult Detention Center without bond. He’s currently scheduled for a preliminary hearing, Feb. 27, 2020, in the county’s Juvenile and Domestic Relations Court.

Meanwhile, detectives are seeking anyone who has information about this case or who may have had inappropriate contact with Kim to call the Major Crimes Bureau detectives at 703-246-7800. Tips may also be submitted anonymously through Crime Solvers by calling 1-866-411-TIPS (866-411-8477), texting – type FCCS plus the tip to 847411.

Tips may also be sent to Crime Solvers by going to http://www.fairfaxcrimesolvers.org/. Or download the mobile tip411 App, “Fairfax Co Crime Solvers.” Anonymous tipsters are eligible for cash rewards of $100 to $1,000 if their information leads to an arrest.