A Journey To Better Understand Their Alexandria Students
Votes

A Journey To Better Understand Their Alexandria Students 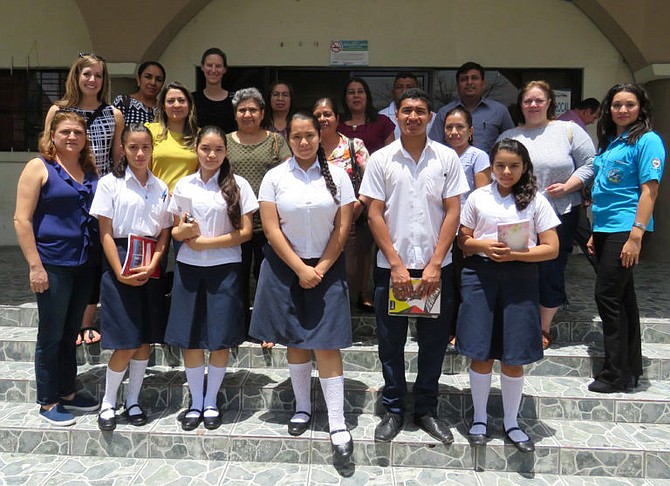 For staff at T.C. Williams High School’s International Academy (IA), the life their students lived before they reach the U.S. is often something of a mystery.

But truly understanding what came before can be invaluable to future success, Assistant Principal of Academy 7, Kristen McInerney believes.

So, at the end of June, she and a team of educators embarked on a fact-finding mission to El Salvador where 40% of current IA students are from.

The women teamed up with a host of contacts on the ground, including Menjivar’s family and the sister of one of the department’s security officers, who happens to be a social worker in the country.

Together, they spent a week traveling from their base outside San Salvador across 300 miles, through seven provinces. They visited six schools, meeting hundreds of children and sharing knowledge with dozens of teachers and administrators.

They even made a stop in Chirilagua — after which the Hispanic neighborhood in the north of Alexandria is named.

“We had 12 people all passionate about education all traveling together in one van. There was a lot of laughter and a lot of great conversation,” said McInerney. “I wanted to learn more about the previous school experiences of our students. I wanted to deeper understand El Salvador’s education system and in turn help our kids make the transition academically, socially and emotionally.”

“I treasure our students and now I can better picture what their lives would have looked like.”

“The trip validated the important work that our passionate teachers and Alexandria community is doing to serve newcomers.”

Children in the Central American country attend school from kindergarten through ninth grade, when they sit for an exam to determine whether they are eligible to move on to high school.

Teachers paid $300 a month manage a class of up to 45 students, no cell phones are allowed, and only one room is air conditioned where aging computers are housed.

Uniforms are mandatory and backpacks must be made of transparent material for security reasons. One school psychologist serves an entire district of about 80,000 children.

One of the most notable differences to McInerney and her team was the school schedule with AM and PM shifts and the three recesses each day. Outside and unstructured, the students ran around, played soccer, and caught up with friends.

Ultimately, that means around only three-and-a-half hours per day spent in the classroom. Half attend in the morning and half in the afternoon — about half that of the typical American student.

“They are used to running around outside during recess and we are telling them, ‘Please walk’ in the hallways and expecting them to stay focused for 90 minutes at a time in class. That was a light bulb moment for me,” she said.

“They are cognitively exhausted when they start here in class. Imagine coming into school for seven and a half hours with a new language and you are used to a schedule so different.”

“Introducing more ‘brain breaks’ is certainly something we will consider.”

She added, “Education is highly regarded in El Salvador and it is taken very seriously. The teachers had incredible rapport and command of the kids but they are hampered by the economic and socio-political system.”

“The gang situation is real and it impacts the daily lives of people who are not affiliated. There are certain neighborhoods that you can’t cross into.”

Teachers explained to the contingent from ACPS that the children coming to America are often ones that are in danger. They frequently disappear from class without warning as they begin their journey to the U.S.

Sometimes they come back weeks later, having either been turned away at the border or had their application for asylum rejected. And yet sometimes they are successful and start a new life here.

Menjivar understands all too well how hard it can be to leave your home behind and start afresh.

“As an immigrant myself, that left El Salvador in the middle of the civil war, leaving a familiar place, family and friends was one of the hardest things I have done in life,” she said.

“Parents without any other alternative are forced to leave El Salvador with their children and in extreme situations. They allow their children to make the journey here by themselves.”

Back in school this fall, students will hear all about the trip and pore over photographs.

They will even examine rock and sediment samples taken from volcanoes in the country, as they compare the geology of Virginia and El Salvador.

“As an Earth Science teacher, I found the experience very valuable,” said Coughlin.

“El Salvador has examples of features that I teach my students about in class that we do not have in Virginia. By seeing and taking pictures of these features, such as volcanoes, and bringing back rock and sediment samples to use in my class, I’ll be able to better relate the subject we are learning about the lives and experiences of my students.”

It is hoped that connections made this summer will be maintained and strengthened for the good of schools in both countries.

One desire is to return the hospitality shown to them and host a group of Salvadoran educators in the future.

“One of the biggest things I saw was that regardless of culture or language, teachers care and are doing the best they can with what they have,” said Preston. “It also made me even more appreciative of the support and care we get from the Alexandria community for our school and the dedication of teachers and staff in creating a continually growing learning environment.”