Problems and solutions presented to a Mount Vernon audience. 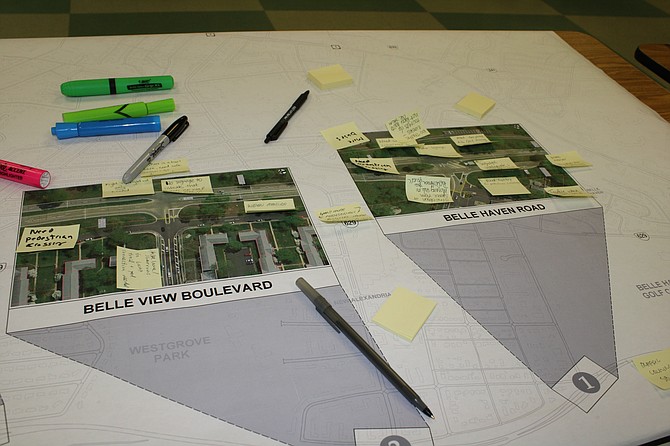 Post-its were used for comments at each point on the parkway. Photo by Mike Salmon. 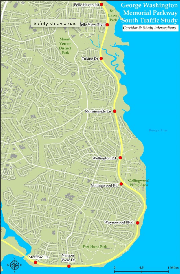 Points along the Mount Vernon Parkway that are problematic.

Washington Parkway. Cars going 70 or 80 miles per hour were part of the discussion, followed by hazards at the Belle View Boulevard and Belle Haven Road intersections, where they’re even considering a roundabout.

“These are our main intersections where a lot of crashes occur,” said Lt. Allan Stone of the Park Police.

A simple answer to dispatch more speed enforcement morphed into suggestions of more crosswalks, signs or traffic signals dangling over the roadway. The overhead signals are not part of the parkway aesthetics and as far as enforcement: “We have been, there’s been a concentrated effort,” Stone said.

The meeting was to discuss recommendations to improve safety at key intersections on the George Washington Memorial Parkway between the City of Alexandria and Mount Vernon. This is the next step in the National Park Service (NPS) and Federal Highway Administration’s ongoing work to improve safety on this section of the parkway. It also is the first time the NPS will be sharing previously developed study recommendations with the public.

Since the first meeting in July, the park service has been trying to gauge what the situation is on the parkway and the accompanying bike trail that has made this park feature a valuable asset for the surrounding communities. At Belle Haven Road, the first intersection south of Old Town, Alexandria, there is a lot of traffic, plus pedestrians and bicyclists, but not much of an island for those making the dash from Belle View to the river and the bike trail. This was on the top of the list of 11 intersections that need attention.

Post-its were used for comments at each point on the parkway.

A roundabout intersection is one of the possibilities for this area, but there wasn’t a lot of enthusiasm amongst the nearby residents. “I can’t get across,” said Patty Wanzer who lives in the Shadowbrook community. “I have to stop on the grass, it’s pretty scary,” she said.

One suggestion is to have left turns eliminated, and possibly implement J-Turns for those heading south. Tammy Fox didn’t think the “no left turns,” is a good idea. “No left turn out of my street, that’s a problem,” she said.

Park Superintendent Charles Cuvelier noted that after the first meeting, there were 90 suggestions, and they honed that number down to 47 they are looking at. One suggestion was to turn the whole road over to the Virginia Department of Transportation, and another suggestion was to put up overhead traffic signals. “The traffic light doesn’t make the cut,” Cuvelier said.

Another item that wasn’t meshing with the suggestions was the budget. They get $13.4 million a year, and $13 million goes to manpower, Cuvelier said. “This is the nature of infrastructure in America,” he said.

There was a comment about the shooting of Bijan Ghaisar in 2017 and a Park Police officer addressed that, saying “we are limited on what we can share.”

There was a moment of silence for Ghaisar.

The process of narrowing it down will resume and another meeting will be held in March 2020, Cuvelier said.