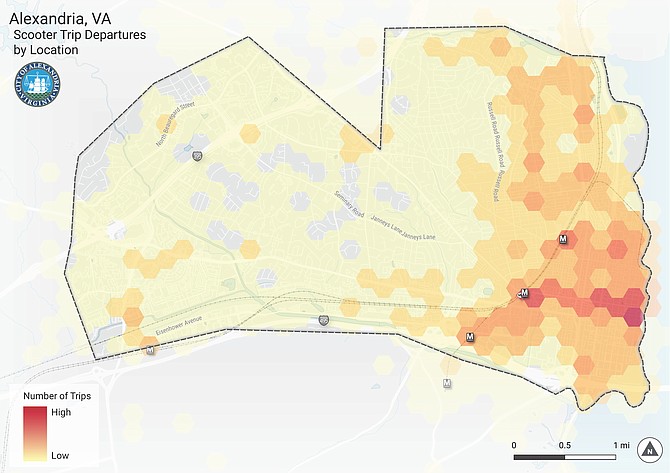 Responding to concerns that the vast majority of scooter availability is in Old Town, the City Council is considering a proposal to require scooter companies to deploy 10 percent of all scooters west of Quaker Lane and another 10 percent west of Interstate 395. 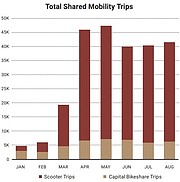 More than 230,000 scooter trips were reported from January through August. The average trip time was 10 to 15 minutes, and the average distance was just under a mile. Scooter companies report about 15,000 active users in Alexandria.

Alexandria is bitterly divided over scooters, and a recent survey showed that the city is just about evenly split between people who hate the dockless mobility program and people who love it. That’s the backdrop for members of the Alexandria City Council, who are now considering extending the pilot into next year. A public hearing on the issue is scheduled for Dec. 14.

At issue are thorny questions about sidewalks and equity, vexing policy issues that confront a city grafting 21st century technology onto 18th century streets. Perhaps the trickiest question is whether scooters should be allowed on sidewalks. If scooters follow the same rules as bicycles, they would be allowed on almost every sidewalk in the city. But council members are considering a plan to forbid them on sidewalks in parts of Old Town and along Mount Vernon Avenue in Del Ray. The no-go zone in Old Town would be from the waterfront to West Street and from Montgomery Street to Wilkes Street.

“For enforcement purposes, it needed to be something that is clear and crisp,” said City Manager Mark Jinks, “something that could be easily remembered.”

But how will tourists know when and where they are allowed on sidewalks? And how can the Alexandria Police Department possibly monitor and enforce this newly created sidewalk prohibition? What happens when scooters become more popular on the sidewalks of Del Ray? These remain open questions as council members prepare to vote on potentially extending the pilot program.

“I don’t know how realistic the enforcement is,” said Councilman Mo Seifeldeiin, a vocal critic of the pilot program. “If it’s there and we don’t put constant enforcement, we’re going to be hearing from the residents.”

"My concerns is not about their business model. We need to make sure all of our residents have equal access."

Council members are also likely to hear from residents about a lack of equity. Responding to a concern that the vast majority of scooter availability is in Old Town, the City Council is considering a proposal to require scooter companies to deploy 10 percent of all scooters west of Quaker Lane and another 10 percent west of Interstate 395. That would flood parts of the city that have yet to see any scooters at all, although it flies in the face of the business model that balances supply and demand.

"My concerns is not about their business model,” said Councilman John Taylor Chapman. “We need to make sure all of our residents have equal access.”

But requiring hundreds of scooters in areas where there is virtually no current demand is likely to create another problem: unused scooters sitting idle in neighborhoods where nobody is using them. Anticipating neighborhood complaints about pristine rows of untouched scooters clogging the public right of way, council members are trying to navigate the need for equity with the demands of the marketplace.

“There’s a concern with being overly rigid here,” said Mayor Justin Wilson. "We don’t want to cause more problems than we solve.”