Governors pitch private partnership to widen American Legion Bridge and include toll lanes on the Beltway. 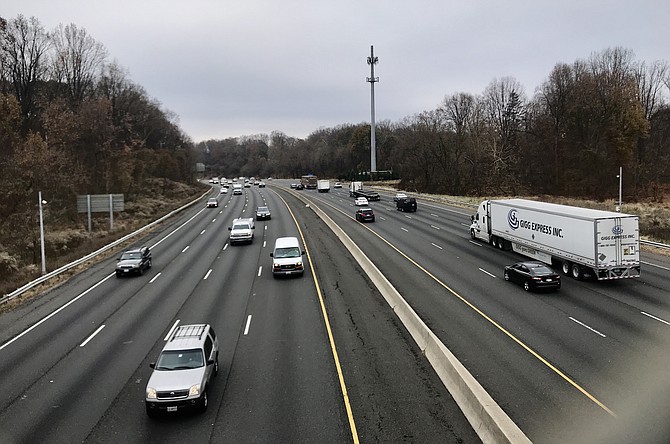 Imagine this: Four more lanes, two in each direction, here on the Beltway just on the Maryland side of the American Legion Bridge. Almanac file photo by Mary Kimm

On the left is Carderock Springs Elementary School, one of many buildings that would be impacted by the widening.

Gov. Larry Hogan (R-Md.) knew how to pitch his plan to widen the American Legion Bridge and add privatized toll lanes around the Beltway.

“The project is expected to cut commuting time in half for many travelers, reduce congestion in the regular lanes by 25 percent, provide 40 percent more lane capacity over the old bridge, and include bicycle and pedestrian paths across the Potomac River,” claimed Hogan, in a joint statement made with Virginia Gov. Ralph Northam (D).

In addition to widening the American Legion Bridge, the project will replace the existing lanes in each direction across the Potomac River and add two new Express Lanes in each direction for approximately three miles between the George Washington Memorial Parkway in Virginia to the vicinity of River Road in Maryland, according to Hogan and Northam.

The two governors made the announcement at the annual Capital Region Transportation Forum on Nov. 12, 2019.

“Without these improvements, our horrendous congestion will only get worse,” said Pete Rahn, Maryland Secretary of Transportation.

CONSTRUCTION COULD BEGIN as early as 2021, said the governors.

“A new bridge means commuters will get to work and back home faster,” said Northam. “Our teams have identified a way to fix one of the worst traffic hot spots in the country.”

“The ‘Capital Beltway Accord’ is a once-in-a-generation achievement for the capital region. A bipartisan, commonsense, interstate agreement such as this has eluded elected leaders throughout the region for many decades,” said Hogan.

The two governors had statistics ready to show the capacity of the current problem regarding traffic at the bridge, which they called “one of the worst traffic choke points.”

“The American Legion Bridge has been operating beyond its capacity for nearly four decades. Daily traffic has grown 390 percent since the bridge opened in 1962, with 235,000 vehicles using it daily. More than 40 percent of the region’s population travels this segment of the Capital Beltway, and the region expects to grow by another 1.2 million people by 2040,” they said.

CRITICISM BEGAN this past week.

“The question is whether the state will allow the public a close look at the contracts before they’re signed or will Maryland Department of Transportation claim that the fine print in proprietary ,” said Citizens Against Beltway Expansion.

There is also room to question the merits and efficacy of such a ten-year, multi-billion-dollar construction project.

“New capacity fills up in as little as five years,” as well as placing more cars on connecting roads, said Stewart Schwartz of the Coalition for Smart Growth.

“It’s time for officials and media to recognize that more lanes do not relieve congestion,” Schwartz said.

Environmental damage could be significant in terms of climate change and water quality. Both Potomac and Great Falls, Va., have been zoned low density area to protect the health of the Potomac River and the quality of the region’s drinking water.

The Potomac River Water Filtration Plant on River Road in Potomac, operated by Washington Suburban Sanitary Commission, extracts 100 million gallons of water a day from the Potomac River and delivers it to millions of people in the region.

EXPRESS LANES built on the Virginia side have caused a choke point at Georgetown Pike, because the lanes end abruptly, and are not matched by increased traffic capacity on the American Legion Bridge or the Beltway in Maryland.

A lot of support for the project comes from Virginia.

“This is once-in-a-generation project that will improve accessibility throughout the region,” said Virginia Secretary of Transportation Shannon Valentine. “We in Virginia look forward to working hand-in-hand with Maryland to deliver this transformative transportation solution.”

The Fairfax County Board of Supervisors approved a letter to the Maryland Department of Transportation State Highway Administration in May 2019.

“The County believes that the capacity needs across the Potomac River must be addressed to alleviate the existing congestion and to ensure that the region remains economically vibrant,” wrote the Supervisors.

“Approximately 239,000 vehicles use the bridge on an average weekday, resulting in substantial congestion and delay for those residing and working in our localities. Use of the bridge is expected to increase over the next 25 years, further exacerbating the problem. Addressing the capacity of the bridge is essential to the quality of life and economic development for our region.”

“Fixing the bridge is a long-standing priority of the region's business community. We are very encouraged that this will also be a public-private partnership for both Virginia and Maryland, showing once again how the private sector is key to moving our region forward,” said Julie Coons, President and CEO of the Northern Virginia Chamber of Commerce.