495 NEXT and American Legion Bridge Update 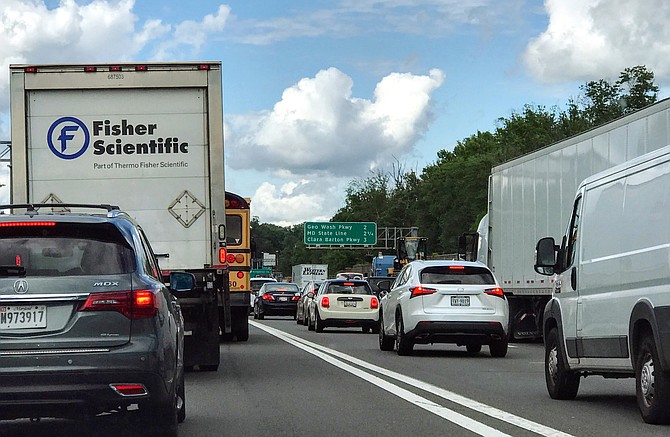 Traffic in McLean/Great Falls area of the Beltway leading up the the American Legion Bridge. Connection file photo

One of the biggest transportation challenges in the McLean area is the congestion caused by inadequate capacity on the American Legion Bridge and the Maryland side of the Beltway.

Since early 2018, VDOT has been working on its 495 Express Lanes Northern Extension project (495 NEXT), which is a 2.5-mile extension of the 495 Express Lanes north from the current terminus near the 1-495 and Dulles Access Road interchange to the vicinity of American Legion Bridge. The project proposes to install two new tolled Express Lanes in each direction to reduce congestion and improve roadway safety, provide additional travel choices, and improve travel reliability.

In early 2019, VDOT signed a nonbinding Development Framework Agreement with Transurban. Delivering the project through this public-private partnership would mean that no public funding by the Commonwealth is needed to extend the Express Lanes network, only tolls. If approved, the project will replace Live Oak Drive, Georgetown Pike, and Old Dominion Drive Bridges and allow for the installation of pedestrian/bike facilities along the corridor. Construction could begin as early as 2021.

Virginia officials have been cautious about moving forward with the project because without replacing the American Legion Bridge, bottlenecks and congestion will only be relocated, not resolved.

The agreement is a commitment to work together to create a new, unified Capital Beltway and replace the aging American Legion Bridge. The cost of the bridge project is expected to be $1 billion, and both states will contribute to the cost through public-private partnerships. The private entity will pay the upfront costs in exchange for future toll revenue meaning toll payers rather than taxpayers will foot the bill.

The new bridge will have four express toll lanes, in addition to eight free lanes, as on the current span. The tolls will fluctuate based on congestion, rising to keep traffic flowing freely. Construction could begin in 2022 and would likely take five or six years.

The next key piece of the puzzle is ensuring that the widening of I-495 just over the bridge in Maryland is done in coordination with the bridge project. The project has faced vociferous opposition from residents near the beltway and environmental groups. Questions remain about the project adding to climate change and lack of inclusion of transit options and bike and pedestrian paths. Construction’s impact on the Potomac River, and houses, schools, parks and other buildings close to 495 remain.

Many state and federal approvals are still needed and there will be opportunities for residents and communities to provide input on these proposals.

Supervisor John Foust (D-Dranesville) said, "I am excited that we are making progress on addressing congestion issues that have plagued our communities, but I want to be sure that the project is done in a way that actually addresses our problems, rather than just moving them."

VDOT will hold a public hearing to present the results of the 495 NEXT environmental study and traffic analysis and solicit community input on March 12 from 6:30 p.m. to 8:30 p.m. at Langley High School in McLean (6520 Georgetown Pike).