Food for Thought, and Eating Of Course
Votes

Food for Thought, and Eating Of Course 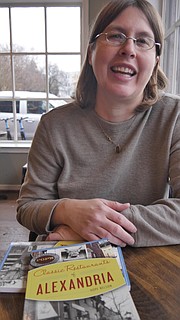 Hope Nelson combined her love of food and experience as a history buff to produce her recently released book, "Classic Restaurants of Alexandria."

"We moved to Alexandria 15½ years ago, and have loved the restaurant scene.” Nelson says her book took about sixteen months to complete, with the research and writing taking a full 12 months. Then came months of editing and proofing.

It took Nelson a couple of attempts to settle on where her book was going. "I thought the best way was to interview restaurant people – the managers, the customers, the waiters." But after interviewing person after person, she discovered that "although it was great and completely informative, it was just one long news story. I wanted it to be a patchwork of the city and its history."

So, Nelson took a different direction. She spent a lot of time at the Alexandria Library Local History Special Collections studying pages through 100 years of articles from the Washington Post, the Alexandria Gazette Packet and other media.

"Then I felt inspired. I got really rolling. I was pulling from the ages of when the writing took place." At the end of the day, Nelson focused on restaurants from a diverse group, incorporating the history and "the microcosm of cultures, religions, socioeconomic status and more." But she says, "no illusions. I couldn't get them all in.”

But, she says with a smile, “that leaves room for volume 2."

Nelson took all of the present-day photos in the book. Some of the rest of yesteryear came from local history and special collections. She attributed her success in this area to the local librarians. "To a person they were so friendly and knowledgeable. I felt like one of the gang within a week." Her book includes vignettes arranged by subject such as Family Dining, Celebrating the Coast and Alexandria's International Hot Spots.

“The richly woven Alexandria culinary fabric has run the gamut.” She said, "So many of these footprints had been here before."

Nelson writes of the "Curse of 100 King Street" where the building hasn't changed much in more than a century but a succession of restaurants have rotated through the space beginning with the Corn Palace and a grocery store in 1871 to the current newly opened Mia's in the same space. She writes about Le Gaulois, which stood on King Street for more than two decades but since closing in 2009 has been the home to a succession of restaurants.

Nelson came across some funny stories. "I've got to find humor in everything I do."

She reports the Beachcombers Restaurant used to rise above the Potomac River on stilts. Customers enjoyed dining above, rather than adjacent to, the water. Although it was closed in 1954 due to a fire, people still talk about how Alice Roosevelt liked to look at the lily pads from the restaurant. And since the restaurant was rumored to be located in D.C. waters, it could stay open later, and no one seems to have challenged it."

She traces the restaurant scene from the opening of Gadsby’s Tavern in 1792 "where no less than six presidents have used it for receptions and grand balls." Today's ambiance remains the same and the menu still features peanut soup and Gentlemen's Pye. At the other end of the history spectrum is Misha's Coffee Roaster and Coffeehouse on King Street, "an anti-Starbucks kind of bohemian."

Nelson holds a full-time job and writes a weekly food column for the Alexandria Gazette, so "I wrote when I could find the time, mostly at night and on Saturday mornings. I do everything better in the morning,” including training for her triathlons. “I finished my book just three weeks before it was time to begin training for my next triathlon."

Nelson's next book signing is scheduled for Jan. 18 at 10 a.m. at the Alexandria Visitor's Center.