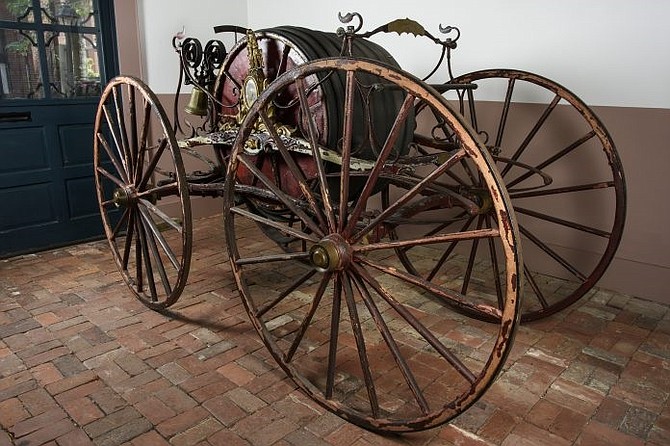 Through online voting, the Office of Historic Alexandria has won a $4,000 grant from the Virginia Association of Museums to help restore the 1858 Prettyman Hose Carriage on display at the Friendship Firehouse Museum. Photo contributed

For days it was close, but when the votes were counted, it was the Office of Historic Alexandria that came out on top in the Virginia Association of Museums Top 10 Endangered Artifacts contest, securing a $4,000 grant to help conserve the 1858 Prettyman Hose Carriage.

Online voting was open to the public and took place from Jan. 22-31. The two artifacts receiving the most votes during the 10-day competition were recognized as the People's Choice Awards and received $4,000 and $3,000 respectively to conserve their artifacts and care for their continued preservation.

In second place was Virginia Living Museum's Mastodon bone collection, which led early in the voting. At times less than a dozen votes separated the top two vote getters but in the end Alexandria’s Prettyman Hose Carriage garnered 2,680 votes, winning by 124 votes.

The Friendship Firehouse Museum's 1858 Prettyman Hose Carriage was among the artifacts chosen following a review process by an independent selection committee of collections professionals from partner organizations Library of Virginia, Preservation Virginia, Virginia Conservation Association and Virginia Department of Historic Resources and which span Virginia's history.

To date, more than $75,000 has been raised to help in the conservation efforts of the 19th century artifact, although costs to restore the historic firefighting carriage are estimated to top $150,000.

The Office of Historic Alexandria and remaining honorees will be recognized during a reception at the Virginia Museum of History and Culture in Richmond on Feb. 7 following Virginia Museums Advocacy Day at the General Assembly.