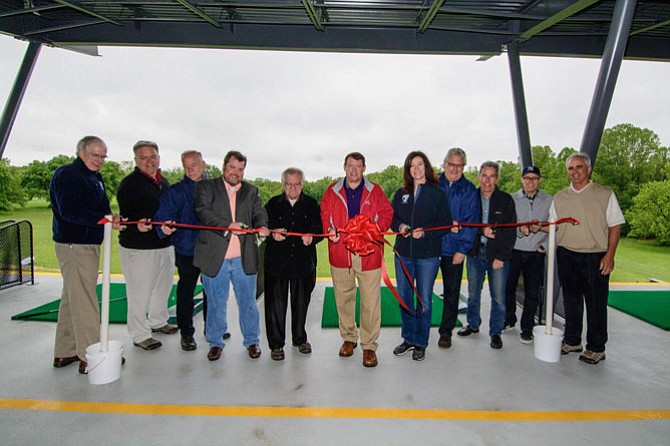 Local officials cut the ribbon on the new golf facilities at Burke Lake just in time for the summer golf season. Don Sweeney

Burke — In celebration of the $6.6 million renovations at the Burke Lake Golf Center, 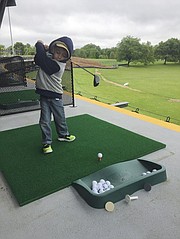 Ian Palmer, 6, takes a swing on the upper-deck putting green.

a ribbon-cutting ceremony was held atop the new double-decker driving range on May 13. Presented by the Fairfax County Board of Supervisors and the Fairfax County Park Authority Board, the ceremony touched on the old and new aspects of the golf center.

Welcoming remarks were given by Fairfax County Park Authority Board Secretary Michael W. Thompson Jr. who touched on his time at the golf center as a child.

“When the weather was bad, you were out of luck,” said Thompson.

That was one of the initial issues with Burke Lake’s driving range — its disadvantage in inclement weather. The driving range used to be just 40 hitting stations, but there was no roof. The golf center’s manager, Louis Musolf, said they would often have to close the range because of the weather.

“We found the need to redevelop. We had a lot of times, especially during our peak hours, that people were waiting to hit golf balls,” said Musolf.

With the need for more stations and a solution to being rained out, the golf center contacted Hughes Group Architects to make the necessary changes to the driving range.

Amado Fernandez, a principal with Hughes Group, said initial discussions about the renovations were made around two years ago, following with the year-long design process.

“The existing facility that was here before followed roughly the same shape,” said Fernandez. “The idea was to create a two-story element that would increase the number of tee boxes,” he added.

After the plans were finalized, the golf center closed on Oct. 1 of last year to officially start the renovations.

The new driving range now has 64 lighted stations, 24 of them covered and heated. In addition, private functions can now reserve tee areas, and Wi-Fi and televisions are soon to come.

“In the past, we have always had to send (private functions) to Burke Lake Park and use one of the picnic shelters or the mini golf area,” Musolf said.

The new reservable areas can seat 20 to 25 people, housing bistro tables and benches behind the stations.

Thompson also talked about the ongoing construction of the new clubhouse, set to open in October. The new facility will be 4,000 square feet compared to the one room, 800 square feet operation that is the current clubhouse right now. A larger outdoor patio will be constructed as well.

Johnson said that the new driving range “gives us a chance to execute our commitment to youth golf.” The Burke Lake Golf Academy has already taken in 200 students in the three weeks it has been open. It offers clinics, camps, and private lessons to people of all ages.

Doris Huff, a Burke Lake Golf Center veteran and Springfield local, has been golfing for a “long, long, long time.” She and her daughters, who have been golfing for four years now, come to the driving range between classes.

She plans to come to the range more often now that it is heated and covered, making it possible to comfortably drive balls in the colder, rainier weather.

“(The range) is different and much, much better than it was. It looks more dedicated,” said Huff.

For more information about the new range and signing up for the golf academy, visit www.fairfaxcounty.gov/parks/golf/blgc/.