Cigarettes Cause House Fire in Alexandria 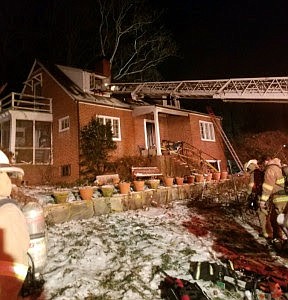 Units from Fairfax County Fire and Rescue Department and the City of Alexandria Fire Department were dispatched on Saturday, Feb. 2 at approximately 1:08 a.m. for a reported house fire in the 6300 block of Telegraph Road in the Rose Hill area of Fairfax County.

Units arrived on the scene of a two-story, single family home with fire showing on one side of the house. The crew from Truck 411, Penn Daw, were performing a primary search of the first floor when they heard a female screaming. They located an 11-year-old female in a bedroom behind a closed door. She was unharmed and carried outside to safety. There were no firefighter or civilian injuries reported.

Two occupants were home at the time of the fire. The fire was discovered by an occupant when he heard a popping noise coming from the kitchen. The occupant evacuated prior to the arrival of the fire department. The other occupant was rescued by fire department personnel. Smoke alarms were present in the home and activated.

Fire Investigators determined that the fire was accidental in nature and started in the kitchen area. The fire was caused by improperly discarded cigarettes into the trash.

Two adults and two juveniles were displaced due to the fire. Red Cross assistance was offered and accepted. Damages as a result of the fire were approximately $93,750.