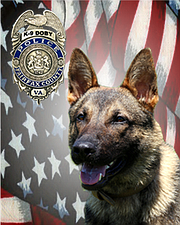 K-9 Doby was born in Hungary and had just turned two years old.

Fairfax County Police Chief Edwin C. Roessler, Jr. announced the unexpected death on Friday, Feb. 22, of K-9 Doby, one of the FCPD K-9 officers. Doby was part of a patrol canine team that responded to assist on a call Friday for an armed robbery in the Arlington Drive area of Alexandria in the Mount Vernon District. During the incident, K-9 Doby collapsed and stopped breathing. His handler administered CPR and he was taken to Regional Veterinary Referral Center in Springfield, but he did not survive. There will be a necropsy to determine cause of death.

K-9 Doby was born in Hungary, and had just turned two years old. He had been a member of the Police Department since March 2018 and actively working cases since August 2018.