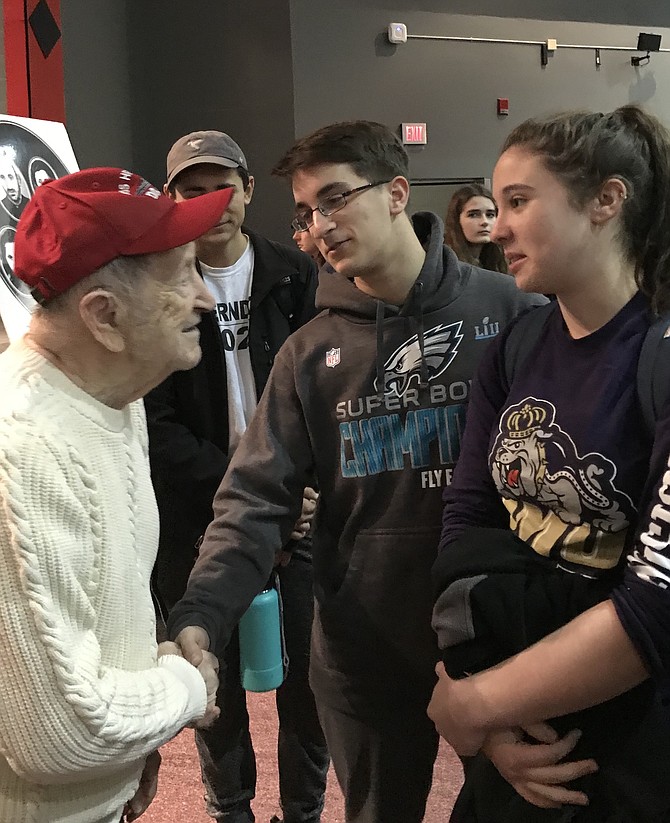 Mathew Steil, 17, and Zoey Birman, 16, Herndon High School Band members, thank Rubin Sztajer, Holocaust survivor for coming to speak to The Pride of Herndon before the students’ upcoming spring trip to Normandy for the 75th Anniversary of D-Day. Photo by Mercia Hobson.

"He is an advocate for hope." —Jordan Meyer, 17, HHS band member 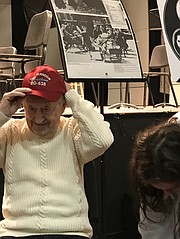 Rubin Sztajer, the 92-year-old Holocaust survivor, tries on his new U.S.S. Herndon DD-638 cap. The ship nicknamed “The Lucky Herndon” was selected to lead the destroyer division during the Normandy Invasion and suffered no loss of life. 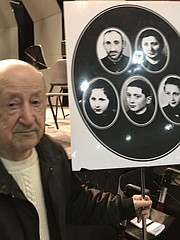 During his presentation to Herndon High School band members, Holocaust survivor Rubin Sztajer shows them photos of his parents, younger brother and two younger sisters he never saw again after the Nazis took him away from his family at the age of 16 and sent him to the Markstadt Concentration Camp.

With the Herndon High School Band selected to represent the United States in Normandy, France, for the 75th Anniversary of D-Day June 2019, Rubin Sztajer, a 92-year-old Holocaust survivor and guest speaker, entered the high school auditorium on Tuesday, Dec. 13, 2018. Irene Hill, who organized the event, wanted to educate the students about the Holocaust through a first-hand source. “I thought it’d be helpful to envision the face of someone on the other end, a reason why our troops fought so hard, (for those) whose only hope in the world was to be rescued,” she said. The audience, mostly band members, crowded the front row seats.

While the students possessed the book-knowledge that the success of D-Day was the beginning of the end of World War II, what they heard that afternoon from Sztajer was something different. It began with what they knew would be a first-hand historical account of the war years, liberation and life afterward for a Polish Jew, but ended with an unexpected lifeline of hope for students in despair and an action plan. Sztajer asked, “that all of the students listening would take his life story as inspiration and motive to never lose hope…what a beautiful life he has been able to create," said Jordan Meyer 17, HHS band member, Clarinet, Wind Ensemble, in an email to the Connection.

Sztajer did not speak from the stage. Instead, he chose to set up the microphone within feet of the first couple of rows where the students sat, creating an intimate setting. From there Sztajer recounted life before during and after the war, ending with his life in the United States. On occasion, he asked the students for a moment. "Let me gather my thoughts.” At times, he cried.

SZTAJER spoke about his early years. "Christian children would throw stones that hit our faces," he said. He recounted that anyone Jewish over twelve had to wear the Star of David, and his family was forced to move to the Klobuck Ghetto when he was 14. The biggest problem he explained was there were no businesses, no jobs there. The family had to scavenge for food on a daily basis.

"We could not buy anything. … My childhood disappeared ... In the summertime, we used to smuggle out at night; steal the farmers’ food," said Sztajer.

Sztajer spoke about April 12, 1941, the roundup of Jews for slave labor and extermination. He shared when his father and older siblings, Gussie and Sam left home to hide; the Nazis entered his home searching for them. Not wanting to go back empty-handed, they grabbed him by the arm. Sztajer was 16. "They pulled me away from my mother crying."

Sztajer recalled his years at Markstadt, a forced slave labor camp. “We marched. We moved mountains of bodies. ... We had no coats, hats ...Then we’d march back. It was worse than Hell. Working to death; starving to death." He told how he eventually changed camps to Bergen-Belsen. “They were the worst. I don’t want to call them people. They were animals. Every day it got worse as the war was coming to an end… our job was to tie up the dead people."

In a crystal clear description, Sztajer recounted one specific day at Bergen-Belsen when he saw a group of women walk by and someone softly called his name. "I saw my sister there, but could not go to her."

Finally, Sztajer told about the liberation and aftermath; he was now 19 years old. "I don’t remember, he said. “I was in a coma. After we were liberated, people looked for their loved ones. My sister found me. My mother gave birth to me. My sister gave life to me." It took him three years of treatment to recover his health, he said.

"Mr. Sztajer surprised me by sharing such painful details about his life and turning them into a powerful message," said Zoey Birman, 16, tenor sax, HHS Band member after the presentation.

"Why do I tell this story?" asked Sztajer. "I know how some of you feel. I was told I was not fit to live." Sztajer reassured them, "You can do whatever you want. Feel confident in yourself. This country gives opportunity to all, and don't let anyone tell you otherwise…there is hope. I can be your example.”

"When he spoke," Meyer said, "it felt as if he knew the hidden struggles each and every one of the audience members was going through. He wanted his time with us to not just be about history, but rather about our future."

Sztajer urged the students, "Go to vote. Study the issues. Not what's good for you but good for the country … I couldn't have picked a better country.

Give confidence, it's more valuable than money."

AFTER THE PRESENTATION, Birman said: “Having grown up in a Jewish home, the Holocaust has always been a source of sadness and fear…I really enjoyed getting to thank him for spreading his optimism and hearing his advice for continuing to embrace Judaism proudly and without fear."