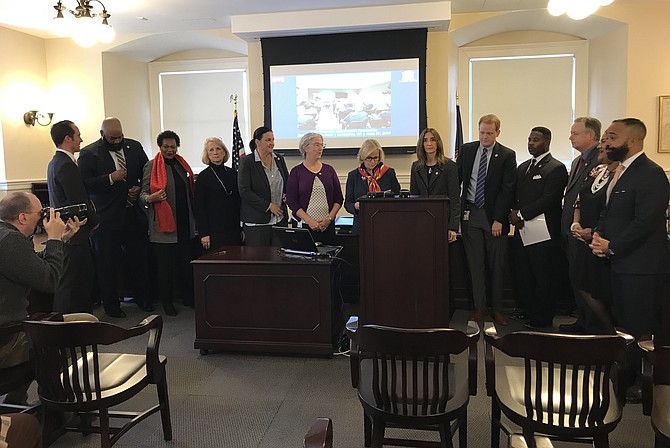 “None of this is anti-Second Amendment; it’s a common-sense legislation,” said Del. Cliff Hayes, D-Chesapeake, co-sponsor of House Bill 1644, which requires reporting lost or stolen firearms.

Under his proposal, failing to report lost or stolen firearms to law enforcement authorities within 24 hours would be punishable by a $50 civil penalty on the first offense, and the fine would increase on subsequent offenses.

Hayes and Dels. Delores McQuinn of Richmond, John Bell of Loudoun, and Kathleen Murphy and Eileen Filler-Corn of Fairfax, all members of the Democrats’ Safe Virginia Initiative, held a press conference to discuss their policy recommendations for gun safety.

“Numbers are heartbreaking … I know this personally, having lost my own brother to gun violence,” Murphy said, whose brother was murdered during a robbery. “We are right to be outraged.”

Murphy said that following the Parkland, Fla. shooting in February, the Republican Party chose to ignore guns in its approach to school safety.

Murphy and Filler-Corn co-chair the Safe Virginia Initiative. The regional chairs include McQuinn, Bell, Hayes and Del. Chris Hurst of Montgomery County. House Democrats formed the initiative during the 2018 General Assembly session after the Parkland shooting.

“Overall, we recognize that guns are the issue,” Murphy said.

They include requiring universal background checks to buy firearms and reinstating Virginia’s law limiting handgun purchases to one per month. “This is an initiative that deserves bipartisan support and endorsement,” McQuinn said.

“We have to implement practical training requirements to ensure that gun owners know how to use their weapons safely,” Bell said.

In June, Hurst held an event in Lexington that focused on the prevalence of guns used in suicides. Hurst is the co-sponsor of HB 1763, a bill introduced again this session by Del. Rip Sullivan, D-Arlington, that would permit the removal of a firearm from someone who poses a “substantial risk.” Such orders permit families and law enforcement to petition a court to temporarily suspend a person's access to firearms if there is documented evidence that the individual is threatening harm to themselves or others.

Parker Slaybaugh, a spokesman for Republican Kirk Cox, the speaker of the House of Delegates, said in a statement Monday that the House Democratic Caucus “created a campaign masked as focusing on school safety.”

“With today’s announcement, it’s clear their group solely focused on ways to restrict Second Amendment rights of law-abiding citizens and not practical solutions to protect our students and teachers in the classroom,” Slaybaugh said.