Burke Gems & Beads in a Business of Beauty
Votes

Burke Gems & Beads in a Business of Beauty

After seven years, local bead artists have found a niche. 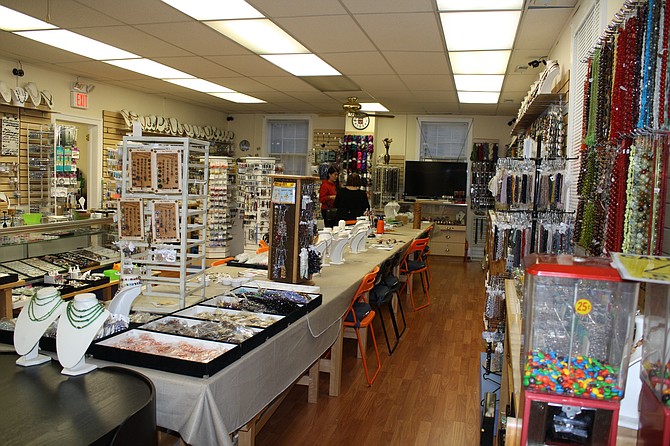 Years ago, Olya Yampolsky’s pearl necklace broke, so the accountant from the former Soviet Union researched and fixed it herself. She found she 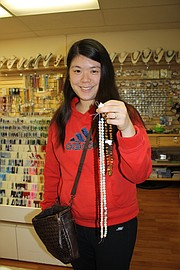 Jen Lu and her mediation beads she made with Olya Yampolsky's help at Burke Beads.

had the knack for that kind of work, and opened Burke Gems & Beads, which just celebrated their seventh year in business.

“My pearl necklace broke and I decided to learn how to fix them,” she said. After that, word got out around her workplace. “I’m fixing for everybody in my office,” she said.

Now she has one of the few bead shops in the area, and it’s the place to go for jewelry of that type where beads and trinkets are needed. Springfield resident Jen Lu found herself in the shop when she was making a “mala,” for meditating. The mala is a tool to help count mantras, and acts as a tactile guide as the meditator sits in silence, according to the Mala Collective.

“It helps you stay grounded,” said Lu, who started with yoga that evolved into her meditation practice. The mala beads needed a tassel and charms, all of which Yampolsky helped her find on their shelves.

The small shop is in Old Town Burke near the intersection of Burke Road and Old Burke Lake Road, across from the fire station. Inside, there are strings of all sorts of beads hanging on the wall, cups of beads in several racks, tools for making necklaces and a work table in the middle of the room. Up on the wall is a U.S. Army Airborne clock, which isn’t exactly in tune with the bead theme, but Yampolsky’s son was Airborne, fighting in Afghanistan and Iraq in the past. He was a West Point graduate. “Best of the best,” said Yampolsky. She has a daughter also.

Tysons resident Doris Chin was at the shop to connect with her bead family who helped her through a recent surgery. “The bead family is my family,” she said. Chin comes in for classes frequently and the Sunday pot luck supper. She brought her wire wrap to finish. “She’s super talented,” Chin said of Yampolsky.

The wire wrap was a specialty of Alecia Cardell, another customer that also teaches classes. She has an upcoming class in late March that deals with wire wraps. Cardell comes in from her home in Manassas because “there aren’t many bead stores left,” she said. Cardell was working on a “kumihimo,” which is a Japanese bead string used on Samurai sashes.

Yampolsky started as a civil engineer in the Soviet Union before it split up, and then went into accounting before taking on the bead shop. She bought the space from a consignment shop owner that was there 17 years, so Yampolsky thought this was a good sign. “Little did I know I’d be working 24/7,” she said.

Selling beads at the shop is accented by the international teachers she brings in to share their expertise. “In April I have a woman coming from

Olya Yampolsky is behind the energy at Burke Gems and Beads

England,” she said. Yampolsky meets many of these bead experts at the annual bead convention in Milwaukee, which she’s been to five times over the years. “I go to meet people, see if they want to come teach,” she said.