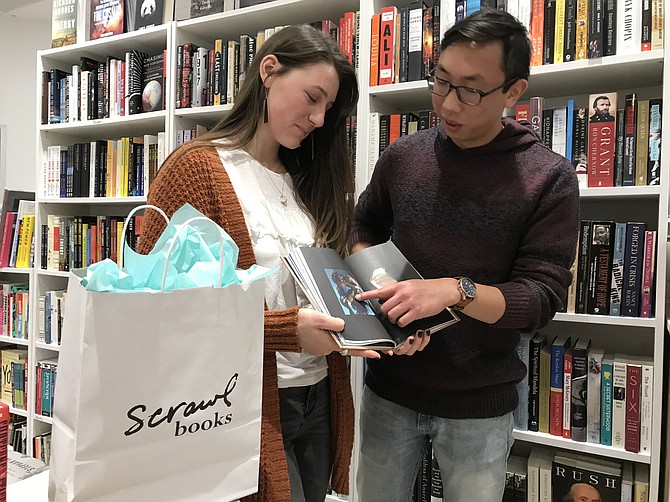 Olivia Fournier, 17 of Reston, and Josh Leong, 18 of McLean, hold the photo journal they created, "Kings x Queens" depicting the moving story of the abandoned children crisis in Ethiopia. "Kings x Queens (is) one of the only active campaigns for awareness in America,” said Leong. Photo by Mercia Hobson.

"The kids still living on the streets and orphans were hard to deal with. Leaving was even harder and made this project even more important." —Olivia Fournier, 17 of Reston

Two local teens, Olivia Fournier, 17 of Reston, and Josh Leong, 18 of McLean, took action after they traveled to Addis Ababa, Ethiopia with members of McLean Bible Church during the summer of 2018 to help care for vulnerable and orphan children in local communities and centers, and perform evangelism ministry. Seeing themselves in a position to raise awareness and donations to benefit Orphan Care Ethiopia upon returning home, Fournier and Leong created a four-part documentary film named "Kings x Queens” and a fundraising photo journal of the same name depicting the moving story of the abandoned children crisis while celebrating cultural differences.

LEONG AND FOURNIER shared their goals, what they learned in their travel to Ethiopia and plans for the future. “Our goal for the video is to advocate for Hope for the Fatherless whose main issue is the abandoned children. ... We wanted to be able to get the story out and educate others and raise funds. … Ethiopia has limited humanitarian aid intervention from organizations including UNICEF, making Kings x Queens one of the only active campaigns for awareness in America," said Leong.

Describing the crisis and the need for funding, Leong said that in January 2018, the Ethiopian government prohibited the adoption of children by foreigners due "to scandal outside the country involving human rights issues," referencing child trafficking and baby stealing. "There's a rabbit hole," Leong reported of the additional twists and turns concerning the crisis. "There is anti-foreign concern as the Ethiopian government wants their children to remain in their borders and their culture," Leong said.

Fournier added that five percent of the current 90 million people in Ethiopia are orphans. "That's 4.5 million kids. It's a really big number," she said. Fournier described a photo she took. "There's one. A group of girls, five of them laughing. That was a sweet moment." Leong described how he got to see first hand the impact contributions made as he stood in a living room for the children furnished by the funds. "It all came full circle."

"The kids still living on the streets and orphans were hard to deal with,” Fournier said. “Leaving was even harder and made this project even more important."

SCRAWL BOOKS, Reston Town Center at 11911 Freedom Dr., Reston is hosting the world premiere of the documentary film series, "Kings x Queens,” and book signing/sale at 4 p.m., Sunday, Jan. 13, 2019. The event is free and open to the public. Fournier and Leong will be on hand to meet people, introduce themselves, talk about their experiences and sign books to bring exposure to the orphan crisis and help support efforts.

"Scrawl is always happy to support community initiatives, and to allow artists and writers to use our store as a venue to share their perspectives and work," said Rachel Wood, founder/owner Scrawl Books.

Individuals can donate to their partner organizations, Hope for the Fatherless and Selamta Family Project, two 501c3 organizations based in Ethiopia or visit kingsxqueens.weebly.com. All funds are tax deductible and will be used to run training, community events and sponsor houses for orphans in local neighborhoods.