Will provide housing for students at GMU. 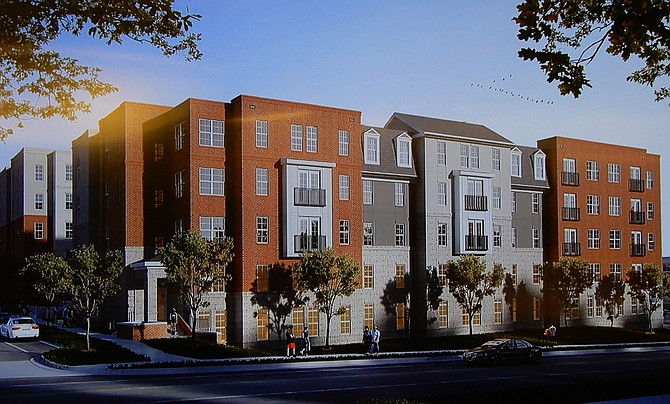 The Capstone building along Layton Hall Drive and a new, private street is expected to look like this drawing.

Artist’s rendition of the Capstone building planned for University Drive and Democracy Lane.

The controversial project divided Council members and residents alike. But after a five-hour public hearing on Dec. 11, the Fairfax City Council approved the construction of Capstone Collegiate Communities 4-2, with Janice Miller and Sang Yi voting no.

Aimed at providing housing for GMU students, it will replace an existing office park with two, connected, four- and five-story multifamily buildings containing 275 housing units. They’ll range from studios to one, two, three and four bedrooms, and some may be double-occupancy, provided the number of building residents does not exceed 825.

Each unit will come fully furnished and will have a common living area, kitchen, washer and dryer, plus one bathroom per bedroom. And no more than four, unrelated people may occupy a single unit. In addition, a swimming pool is proposed for an internal courtyard.

The site is 6 acres bounded by Democracy Lane and University and Layton Hall drives and requires a Comprehensive Plan amendment, a rezoning and a special exception. Entrances will be from Democracy and Layton.

Some 737 parking spaces will be provided – 680 in a parking garage, plus 57 on-street and surface spaces. Parallel parking will be along Democracy and on a future, private street, and all streets will have sidewalks. And Capstone Collegiate Communities LLC will contribute $30,000 for two bus shelters.

AVERAGE DAILY TRAFFIC would increase in that area because of the new residents. But Brooke Hardin, the City’s director of Community Development and Planning, said a higher-density, commercial-and-office project built there, instead, could potentially yield even more traffic.

“A lot of us are concerned about Capstone selling to another company after being approved,” said Councilwoman So Lim. But Hardin assured her that any agreements Capstone makes with the City will run with the land.

Councilwoman Jennifer Passey asked how often the Cue bus would come through that new route, and City planner Supriya Chewle said, every 30 minutes. Passey also asked how the City would deal with complaints resulting from the students living there, and Hardin said it would speak directly to GMU.

Councilman Sang Yi wondered how all those students would affect the bus’s trip generation, but Transportation Director Wendy Sanford said she didn’t expect all 825 students to use the bus. She said Mason students currently comprise 34 percent of the total ridership.

Noting a difference between Capstone’s and City staff’s financial and benefit analysis, Yi said, “The applicant estimates a $96,000 household income per unit.”

City planner Eric Forman explained that “Each household would contain an average of three adults, and we assumed it would function as student housing. But it’s difficult to estimate an annual income for each of them. We estimated $25,000/adult or $75,000/unit.”

Similarly, he said staff estimates 35 percent of the students’ restaurant expenditures would be spent on City restaurants, whereas the applicant estimates 50 percent. And although Capstone estimates $2.9 million annual expenditures in the City by these residents, Forman said there’s “no way to be accurate” when estimating Fairfax’s expenditures on them.

Attorney Lynne Strobel, representing Capstone, presented the project details. “The property is one mile from GMU and a quarter mile from Old Town Square,” she said. “There are about 90 trees on the property, but 84 of them are in poor to bad shape. And the buildings there now are older and 50-percent vacant.”

IN RESPONSE to the City’s suggestions in November, said Strobel, “We made the building façades not flat, added landscaping and the parking garage is now wrapped completely so it’s not visible [from the outside]. And we’ve added a drop-off area, short-term parking, courtyard with pool and indoor fitness areas and yoga rooms.”

Strobel said the students’ peak traffic time is around 11 a.m., and traffic will be mitigated by the property’s location – a 5-minute walk to downtown and 2 minutes to the CVS. “And we’ll encourage the use of bicycles and the bus,” she added. “We’ll have 75 secured bike spaces in the garage and will contribute $20,000 to a bike-share station.”

She said students will be motivated to bike or take the bus because of the expense of parking at GMU and how far away some of the lots are from the classrooms. Furthermore, said Strobel, “It costs $600-$700 for a reserved parking space on campus.”

Using the City’s student income projections, she said, “We estimate each student will spend $3,720 in the City, or $310/month. Multiply that by 825 students and that equals $3 million spent in the City.”

Strobel said Capstone Communities are professionally supervised and managed, with a live-in manager. She also noted that student managers “will be the eyes and ears of the community.” Parents or guardians will co-sign the leases, and students’ vehicles will have decals “so we’ll know if they park elsewhere.”

She said the project “will result in increased vibrancy of downtown and enhanced synergy between the City and GMU. Old Town has been struggling, but students within a 5-minute walk will help the merchants there, be a catalyst for future development and make it a healthier city, overall.”

“GMU is growing, but has limited opportunities for housing on its campus,” continued Strobel. “And Capstone offers quality, affordable and secure student housing, which benefits the university, too. It’s been successful in its development of student housing throughout the country, and this project will fit nicely into the fabric of this community.”

Still, Councilwoman Janice Miller noted a deficit of 117 parking spaces. And, she said, “If the number of beds goes up to 825, there’ll be an even larger deficit.” But Strobel said more parking could be provided, pending the final design.”

Councilman Michael DeMarco said federal law prohibits discrimination by offering housing to students only. But since the units are leased by the bedroom, replied Strobel, they won’t appeal to families. DeMarco also asked about the typical mix of students expected, and Strobel said they’ll mainly be upperclassmen and grad students.

Yi stressed that he has no enmity toward GMU or its students and favors a strong relationship between the City and university. But, he said, “I don’t feel there’s much effort [by the applicant] to make compromises. The Comprehensive Plan is our guide to future development, and the current plan encourages GMU to add on-campus housing, itself. Capstone is a private company that wants to make a profit. But I’m surprised how little it took for us to accept its arguments about the benefits to the City, at face value.”

He then asked if the density could be negotiated and reduced, but Strobel said a certain number of units was needed to make the project profitable. Furthermore, she said, “Because of the changes we’ve made to improve this project and its architecture, the construction cost since we first started discussing it with the City has gone up about $12 million.”

Yi also asked, on average, how long Capstone manages or retains its properties after development, and Capstone principal John Vawter said 18 months, reacting to market conditions. Yi also noted some sexual crimes, noise issues and elevator problems that happened at other Capstone properties in the past.

But Vawter countered by saying the sexual crimes amounted to less than half of 1 percent of all 57,000 Capstone leases since 2012. He also quoted from a letter praising a high-quality development Capstone built in 2006.

After that, some three dozen residents and business people commented on the project before Council discussed and approved it in a split vote.