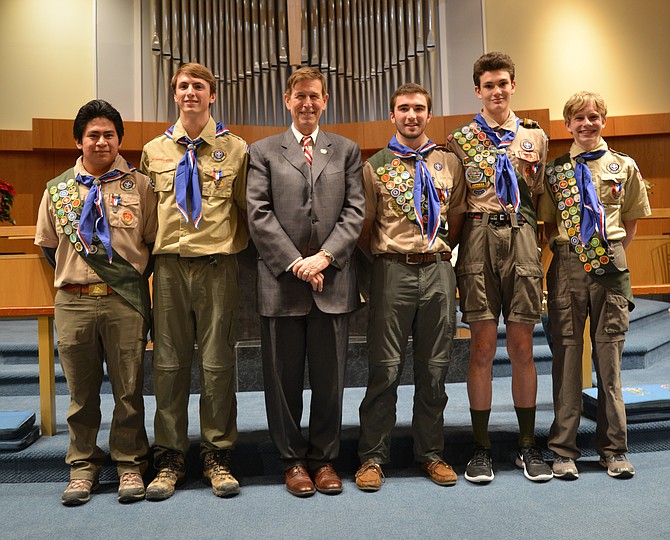 When Luis Gentry, William Greenwood, Grant Halla, Henry McCarthy and Eric Mizusawa of Boy Scout Troop 652 accepted their new pins, certificates, and kerchiefs signalling their entry into the ranks of Eagle Scouts, it marked a remarkable accomplishment. Not only did these young men earn a coveted and difficult-to-achieve status – only some 6 percent of scouts reach Eagle Scout level, according to their troop’s Star Scout Jack Al-Eyd who also served as the Master of Ceremonies at the award ceremony – but to have five individuals from one troop simultaneously earn that distinction – well, that is something to write about.

AN EAGLE COURT OF HONOR assembled on the evening of Jan. 7 at St. Dunstan’s Episcopal Church in McLean to recognize the five, present them with symbols of their accomplishment, and to honor them and the family members who support them in their endeavors.

St. Dunstan’s has championed Troop 652 for years, said Leonard Ward III, the troop’s charter organization representative, Senior Warden at St. Dunstan’s, and himself an Eagle scout. “We are all so proud of them, and all of our scouts,” said Ward.

Given the connection between the troop and the church, it was fitting that the ceremony took place there and that St. Dunstan’s rector, Rev. Stephen Shepherd offered the Opening Prayer and some spiritual thoughts.

“These young men set an example and are an inspiration. They set goals and demonstrate persistence to achieve them,” said Shepherd.

James Geitman highlighted the principles of scouting by leading both the Eagle Scout Challenge before the presentation of the honors by Troop Scout Master Fred Vogel, and the Eagle Oath and Charge to the newly minted Eagle Scouts.

U.S. Rep. Don Beyer (D-8) was the keynote speaker for the event, and professed that scouting was an important part of this youth, “although I never achieved this high rank that you five have,” he said.

Beyer told the honorees that their achievement was something that would stand them in good stead in the years to come. Not only would the discipline and integrity that go hand-in-hand with scouting be something to guide them in the future, but the congressman noted that a majority of those that he and his colleagues recommend for positions like ambassadorships were scouts, and many of those were, in fact, Eagle Scouts. “You are in good company and you make a good company for others to follow.”

The scouts weren’t the only ones to walk away with accolades and awards. Mothers, fathers and other family members were called forth and given pins and certificates that recognized their contributions to the success of the scouts. Those family members and others, including siblings, scout leaders, teachers, church leadership and friends were also given their due when it was the turn of the new Eagle Scouts to address the assembly.

Each gave thanks to their supporters, and praised their fellow scouts, telling a few stories of the adventures they have shared on the journey to this moment in their scouting careers and encouraging other scouts to keep going on the scouting path.

Eagle Scout Henry McCarthy described activities and campouts that were filled with camaraderie and good times, but that “also tested all of our skills,” particularly when they found themselves in the middle of the Derecho event on one of those out-of-doors trips.

Things got “a bit scary” on that occasion, said McCarthy, but the scouts and their leaders stuck with their training and their guiding principle of preparedness got them through the experience.

Family members also took turns at the podium to express their pride in their new Eagle Scouts. Luis Gentry’s grandfather said he had every “right to brag tonight.” With Luis’s accomplishment, there are now four Eagle Scouts in the family.

THE CEREMONY exhibited the gravitas appropriate to the occasion, but there were also laughs a-plenty when younger fellow scouts added their congratulations and told a tale or two about the honorees. Like the time that Luis Gentry managed to sleep through a visit by a bear to their campsite that had everyone else up and ready to take action.

“And that bear probably came around because Will Greenwood decided to bring some honey-flavored candy along as a snack!” laughed tale-teller Jack Al-Eyd.

In order for a scout to earn Eagle status, he must plan and lead a service project.

All five of the new Eagle Scouts acknowledged their honors with humility and thanks and agreed that their scouting journey “wasn’t over yet…we have more to do and accomplish.”