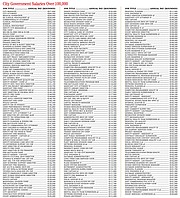 Overall, city government employees make less than the workforce at large, although their benefit packages add a lot of value.

On average, city employees make $69,400 per year, based on a roster of some 2,800 city employees obtained in September. That compares to about $90,100 citywide and $70,200 regionwide, according to the American Community Survey and Bureau of Labor Statistics, respectively.

The city’s compensation philosophy aims “to be competitive at a minimum with the average pay” of neighboring local governments.

For a rough comparison to the private sector regionwide, here’s a sampling of annual wage averages from the Bureau of Labor Statistics:

Here are some rules of thumb that estimate the value, on top of salary, of city-paid benefits (FICA, health, pension, disability, life insurance), according to city spokesperson Craig Fifer:

These averages don’t apply uniformly to every employee. A given compensation package depends on variables specific to the individual.

In particular, the city’s health insurance contributions vary widely, depending on the chosen plan (if any) and the number of people covered.

According to Frank Shafroth of George Mason University’s Center for State and Local Government Leadership: “In general, Alexandria is — and tries to be — competitive with regard to health and retirement benefits to neighboring jurisdictions in Virginia.”

Comparing benefits between the public and private sector is difficult. Nationwide, private industry paid workers 43 percent on top of salary for benefits, according to recent figures from the Bureau of Labor Statistics. But the bureau cautions against direct comparison between the public and private sectors, because contribution percentages differ between occupation types, which in turn differ between sectors.