County Looks to Use Drones
Votes

County Looks to Use Drones 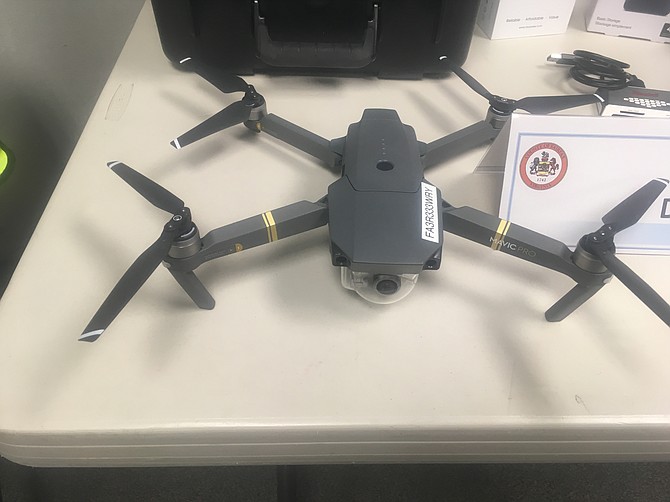 County looking to use drones. Photo by Mike Salmon.

Big brother isn’t watching you, even though Fairfax County is looking to use unmanned aircraft systems (UAS) to monitor emergency situations in

Drones come in all sizes.

According to Ray Shrout, deputy coordinator for the Fairfax County Office of Emergency Management, “It’s a tool in the toolbox,” he said at the first of several public information meetings involving the possibility of using the UAS. The meeting on Wednesday, Jan. 16 in Mount Vernon was one of six meetings the county conducted to discuss the use of this new technology to monitor things like fires and weather emergencies. With the new technology, Shrout asked, “Why not?”

The UAS’s or “drones,” as they’re more commonly referred to, can be X-shaped vehicles about a foot wide, with levitating propellers and a radio control. The UAS’s have names like the “Mavic Pro,” or the “Spark.”

“These things are easy to control, there’s not much to it,” said Shrout.

Glenda Booth, president from Friends of Dyke Marsh, was at the meeting and worried about the drones and wildlife, particularly the bald eagle population. “If you have a rogue operator that wants to harass a bald eagle nest, that’s a problem,” she said.

In the county presentation, entitled “Fairfax County Public Safety Unmanned Aircraft Systems (UAS) Program Overview,” the focus was the increased level of safety the UAS brings. “They can get into areas that a helicopter can’t,” added Shrout, “live streaming imaging to the incident command.” They had pictures of building fires as an example.

In May 2018, the county emergency office brought these to the attention of the Board of Supervisors who wanted to wait for more outreach attempts before making a decision. A UAS task force was created with participation from George Mason University, the NAACP, ACLU, FAA, the Audubon Society and others. The office of emergency management is heading the outreach. “We are going to present to the board in March,” said Shrout.

There’s always that possibility of rogue use, like the recent incident at Gatwick Airport in London where flights were cancelled because of rogue drone reports. The ACLU is more concerned with protest groups. “One of our biggest fears is that these devices could be used to spy on protesters legally exercising their constitutional rights,” the website read.

The county emergency office is adhering to Virginia Code 19.2-60.1 which addresses the use of UAS’s. “Everything we’re doing follows this to the law,” said Shrout. “What hobbyists do is considerably less restrictive than official capacity,” added Christian Quinn, a Fairfax County Police officer at the meeting.

After the presentation, there were questions involving commercial use, sensors and the pirating by outside parties, but none about civil rights. Booth did bring up the birds at this point. “You’d be amazed at how many bald eagle nests there are in Fairfax County,” she said.

The Mount Vernon meeting was the first of six meetings around the county. They are gathering comments and the comment period is from Jan. 7-Feb. 8. Comments can be submitted to uas@fairfaxcounty.gov.