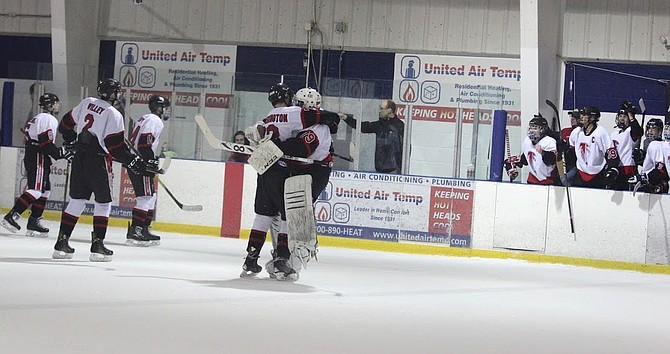 The Warhawks capped off a festive senior night with a come-from-behind win over the previously undefeated Chantilly Chargers 6-5. Madison would play much of the game in catch up mode, with Chantilly scoring 2 early goals but the Warhawks would tie it up with 2 goals 87 seconds apart midway thru the first period. Goals were scored by forward Hayden Winkleman, assisted by Matt Hetherington, and a goal from forward Luke Pohlman, assisted by forwards Sammy Thompson and Jeff Hunter. Chantilly would add a goal to their tally late in the first but Madison would answer early in the second with a goal from forward George Bilidas assisted by Preston Cain. Chantilly would present the Warhawks with their biggest challenge early in the second with 2 penalties and a 2 man advantage. Chantilly would score on both but that did not deter the Warhawks. Forward Luke Pohlman would score his second goal of the game assisted by defenseman Nick Willey to start the comeback effort early in the third period. Midway thru the third, defenseman Michael Crespy, assisted by forward Tom Hetherington would tie the game up and the go ahead goal would come from forward Matt Hetherington, assisted by defenseman T.J. Ezzard with 3 seconds left on the clock. Goalie Ben D’Haiti would turn away 21 shots.

The Warhawks' next game is Friday, Jan. 25 at 10:25 p.m. at Ashburn Icehouse vs. the Westfield Bulldogs.