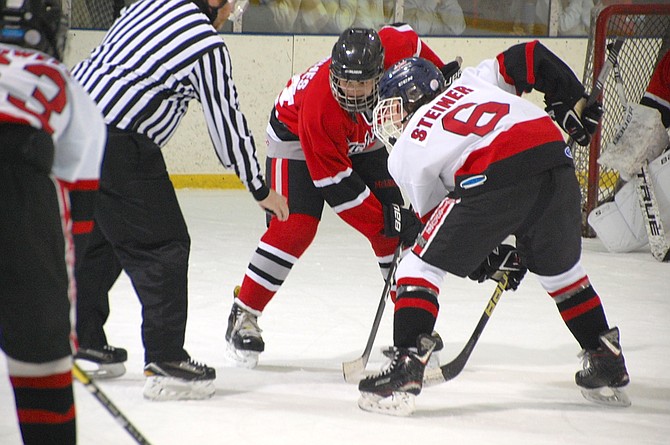 Madison forwards Leo Steiner and Ben Cowell face off against the McLean Highlanders. Steiner had one goal and one assist; however, Madison would fall to McLean 3-9. Photo by Katherine Willey

The Madison Ice Hockey team was upended by McLean Friday night 3-9. McLean would score off of the opening faceoff and tally a second goal about a minute later, giving the Highlanders an early 2-goal lead. Defenseman Nick Willey, assisted by Matt Hetherington, would blast a slapshot from the blue line to get Madison back in the game, but a string of penalties would stifle Madison’s scoring opportunities. Madison would pick up a couple of goals in the third period by forward Jack Hunter, assisted by forward Leo Steiner, and later a goal by Leo Steiner, assisted by defenseman Michael Crespy, but it would be too little, too late. Madison was outshot 32-29. The Warhawks face Independence/Rock Ridge on Friday, Jan. 31 at 6:10 p.m. at Reston Skatequest. It will be Madison’s senior night, with 10 players being recognized.