Burke Resident Is the Driving Force Behind Video Magic
Votes

Burke Resident Is the Driving Force Behind Video Magic 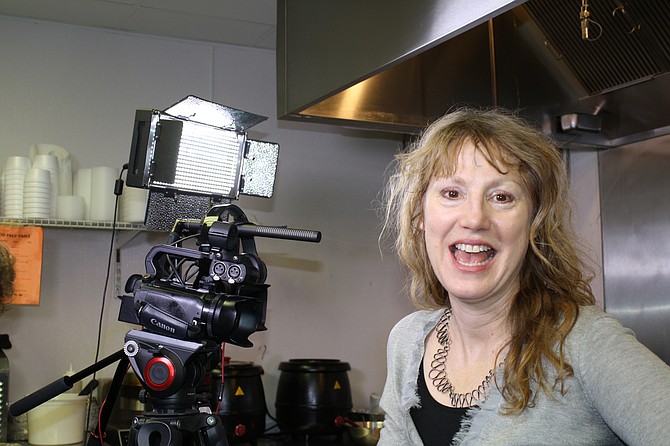 Keri Cannistraro is at home at her video production company in Burke.

Promoting mom and pop businesses or supporting a humanitarian cause is the motivation for Burke resident Keri Cannistraro, CEO of her own

Keri Cannistraro on the set in the Virginia horse country.

video production company “VideoMagic.” She runs the company out of her home office, and employs a part-time production assistant to keep her dream alive. “It’s my passion, one of my favorite things to do,” she said.

Local non-profits she’s worked with include Family Pass, the Lamb Center and Foundation for Fighting Blindness where they blindfolded participants to give them an experience of being blind. They called it “Dancing in the Dark,” which Cannistraro said was a humbling experience.

Restaurants are a niche she’s taken on, and that brought her to a video character named “Food Dude.” She does about two shoots a month with Food Dude, aka Brandon Frye, and recently finished up a shoot at Al’s Steak House in Alexandria. Cannistraro showed up with assistant Cheryl Anders and Frye as they explored the process for making a cheesesteak sandwich that Al’s is locally famous for.

Frye is trying to get his Food Dude show on the Food Channel. Locally, VideoMagic has done other Food Dude shoots at Texas Donuts in Centreville and the Sully Pour House in Herndon. The show is the same format as the cable hit “Diners, Drive-ins and Dives,” and at one time,

David Page, the former producer of the Diners show worked with Frye and Cannistraro, and the fact that “he was a perfectionist,” added a little stress to the set.

Some of the restaurants and people she’s taped have roots in Vienna, so she’s on the board of the Vienna Business Association. She gets some business that way including a custom home builder that demolishes older homes and builds new ones in their place. One home was burned down as a practice ground for the local fire department and Cannistraro was there, cameras rolling.

Cannistraro graduated from South Lakes High School in Reston and then from Temple University with a degree in advertising. One thing led to another, and she found herself behind the video camera. At one point, she got her family involved a few full-production movies with characters and scripts, and the good vs evil plot. “I’m the fun aunt,” she said.

Her niece, Kalli Cannistraro, agreed. She’s a junior at Oakton High School and has been in several productions including one that followed the Wizard of Oz story line - Kalli was Dorothy and younger sister was the good witch. “It was always fun,” Kalli said. Another time, everyone on the vacation went around singing “Goodbye to You,” a popular song by Michelle Branch, and Keri Cannistraro edited it all together. “Once a year we all get together and watch them,” Cannistraro said.

Cannistraro has already started on a spring project with the horse folks at Middleburg Spring Races where she’s interviewing jockeys and others involved to build the exposure of that event, which takes place in April.