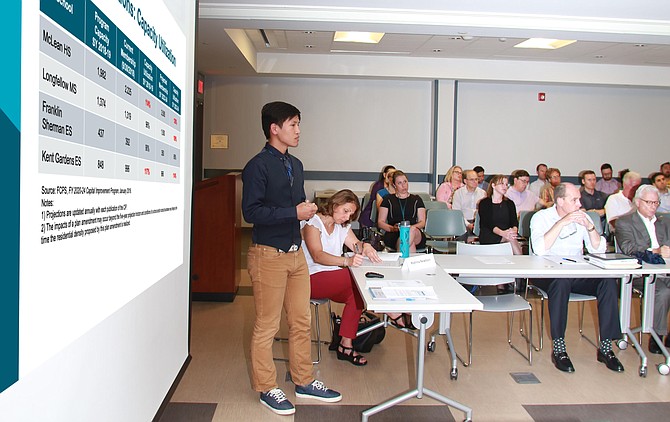 A 12th meeting of the McLean Community Business Center (CBC) Task Force was held on June 18, 2019, at the McLean Governmental Center to discuss the latest updates on city planning and development. The topic was covered in three presentations by the experts from Fairfax County Public Schools, Department of Transportation, and Department of Planning and Zoning.

The meeting started with the presentation from FCPS. Paul Ngo, school facilities planner. Two of the four schools are likely to remain overcrowded. The current enrollment at McLean High School is 2,225 students with a program capacity of 1,982, accounting for 114 percent, with projections sending that up to 126 percent by 2023. It makes McLean High School the most overcrowded high school in the county.

This year the Kent Gardens Elementary School is at 116 percent capacity. FCPS plans include re-assigning instructional spaces within the school, creating additional instructional space, adding temporary classrooms, capacity enhancement through either a modular or building addition and potential boundary adjustment with schools having a capacity surplus.

Bob Pikora, FCDOT Senior Transportation Planner, followed up to the discussion held on April 8. The scenarios proposed are different in terms of the ratio of residential and non-residential units. The purpose of the assessment was to determine whether one of the alternative land use scenarios (codenamed by the task force as “Scenario 4”) would generate vehicle traffic that “influences” or “overwhelms” existing road network. According to the study, the change should result in a slight volume increase in weekday trips. Next steps will include a full modeled analysis of the roadway network with the involvement of VDOT. The results are expected by the fall of 2019.

The next topic continued the discussion about the strengths and weaknesses of two alternative development scenarios, a form-based plan and a plan that designates specific floor area ratios (FAR) for each parcel or area in the McLean Community Business Center. David Stinson, of the Facilities Planning Branch in the Department of Planning and Zoning, shared a case of Markham Place from Annandale, which, together with McLean CBC, is also part of the Fairfax County Comprehensive Plan. In this case, key important land use decisions have already been taken, and the project is now in progress: 12-story, 310-unit multi-family building is the biggest project of the plan. Stinson reported that rezoning from planned development commercial to planned residential mixed-use has already been approved under the form-based plan with the floor area ratio 2.42 approved under rezoning application. This rezoning is expected to be a catalyst for the revitalization of Annandale Central District. At the end of the meeting, Kim Dorgan, Chair of McLean CBC Task Force, asked the task force members to indicate by a show of hands the approach they support for the Mclean CBC, FAR-based or form-based. The opinions were equally divided.

The next meeting is scheduled for July 15.