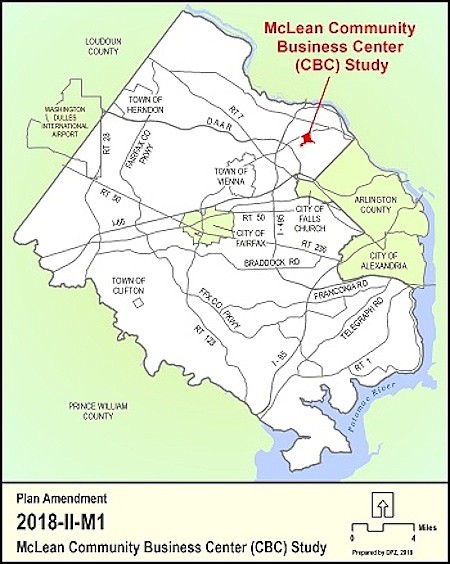 The area of the McLean Community Business Center Study encompasses a small part of Fairfax County as a whole, but for residents nearby and within, it makes a difference. Screenshot via Planning and Zoning Fairfax County 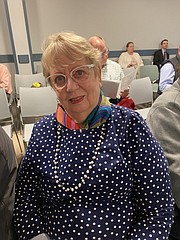 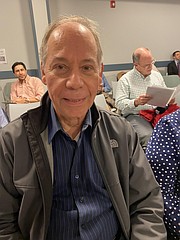 Frank Cevasco: I remain relatively confident the task force will succeed in steering the county’s planning process in a positive direction; that outcome will be aided by what I perceive is a motivated and talented county planning staff. 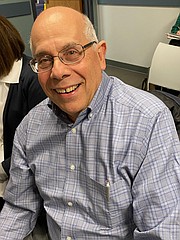 Bob Hollis: I'm new to this and don’t know enough about what is going on. I viewed the videos and disengaged. And now, I moved to the Signet, which will be impacted by decisions related to the CBC.

Don't expect proposals on the table for the redevelopment of the McLean Central Business Center (CBC), just yet. The Overall Project Schedule for the CBC Study must be completed first, followed by other steps at the County level. While documents presented at the Task Force Orientation Meeting held May 31, 2018, anticipated the Study's timeline to run from April 2018 through January 2020, a revision proved necessary.

SIGNIFICANT PROGRESS in the McLean CBC Planning Study has been made. Check the box for a critical project goal, "A common vision for downtown McLean." On Dec. 18, 2018, contractor Streetsense completed and presented its Final Vision for the McLean Community Business Center after compiling and analyzing community input.

As for achieving another critical project goal vital to the future of downtown McLean, that of translating this vision into recommendations for changes to the Fairfax County Comprehensive Plan, 2017 Edition, McLean Planning District, McLean Community Business Center, progress by the McLean CBC Task Force, county staff and the community is nearing Staff Reports and Public Hearing after 21 meetings. According to Leanna Hush O'Donnell, AICP, Director, Planning Division Fairfax County Department of Planning and Development: "The next several Task Force meetings will continue to focus on comments to draft Plan language. Staff will be working on revisions to the draft Plan language for consideration by the Task Force and the community."

The evening's agenda listed three items participants hoped to accomplish that evening: Administrative, Draft Comprehensive Plan Text, and Public Comment. Kim Dorgan, Chair of the McLean CBC Task Force,thanked the staff for "the really good draft." "I think it reflected overall the center of what the task force has been talking about. I appreciate all the effort that went into that," Dorgan said.

During the Feb. 10 meeting, the McLean CBC task force began their review of the draft Comprehensive Plan language for the McLean CBC and provided comments for consideration to County staff. The Vision Plan guided the task force as its contents proved to be determinants community members brought forward in focus groups, online surveys, workshops, public comment and direct feedback to Streetsense, contracted by Fairfax County to complete the Vision. Such factors as Economics – the unique challenges for McLean development due to assemblage of retail and office condos having to split the ownership and land control of parcels; Planning and Urban Design-access and mobility for both vehicular and potential bike/pedestrian connections and Form and Character – what design influences would guide task force discussions and suggestions.

In one of the first discussions, Task Force member Derrick Swaak read a letter from McLean Public Art (MPA). It encouraged public art as part of the revitalization. He said: "Bringing public art projects, both temporary and permanent to the community, has shown clear benefits in measurable economic and social returns to municipalities in our region…and enhances the identity of the community and often become place makers." Although Line 347 of the Fairfax County Comprehensive Plan, 2017 Edition Mclean Planning District mentioned public art, Swaak recommended it be "taken one step further" and expanded.

OTHER TOPICS covered at the meeting, which focused on a review of the initial set of draft Plan language were as follows and provided as a summary by O'Donnell:

Discussion on public art and proposal to incorporate language that encourages public art to help create a sense of place and community vitality;

Changes to map colors to make them easier to read;

Checking for consistency in terminology (e.g., references to urban parks);

Providing definitions, examples, or other means like a glossary of terms so the reader can understand the meaning of certain terms (i.e., community services, urban, suburban, best practices);

Examine which recommendations could be stated with stronger language (e.g. "it is expected");

Given lines by # to be changed, from X to Y; word-smithing;

Description of the overall vision for the CBC, and making sure the draft vision statement does not give the impression that the sole focus of the plan is on the bonus area;

Suggestions to address building heights in the number of feet to define the stories, rather than just providing a maximum number of stories;

Discussion on center zone urban park and the consolidation conditions

Wrapping up the meeting, Chair Dorgan said, "Some of this is wordsmithing… We prefer the document to be pretty much done but not done and leave it open for input from the community…and we’ll consider that before we have our final meeting in April, which is looking more like May."