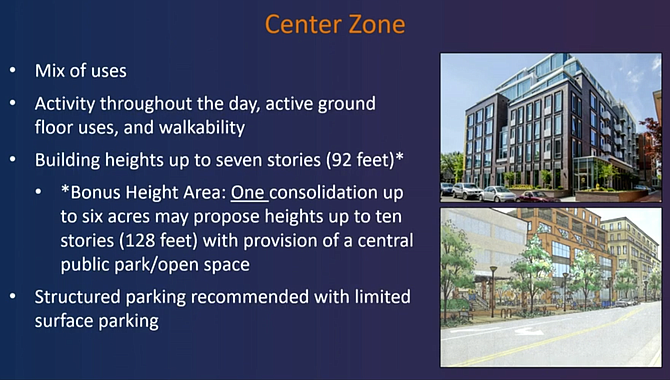 The Fairfax County Board of Supervisors unanimously approved on June 22 Plan Amendment (PA) 2018-II-M1 that proposed new Comprehensive Plan guidance for the McLean Community Business Center (CBC). Supervisor John Foust (D-Dranesville) said time and experience had demonstrated the 20-year-old plan did not have sufficient incentive for most downtown McLean property owners to justify the cost and lost rental income when considering redeveloping their revenue-producing properties. He added McLean residents told him they wanted a more pedestrian-friendly, vibrant downtown, one where they could celebrate a sense of place, gather, and participate in community-focused events.

"Doing nothing in McLean is not an option," Foust said before the board vote. "Revitalize the business district, or it will continue to deteriorate and provide fewer and fewer community amenities to see year after year, going backward."

THE MCLEAN COMMUNITY BUSINESS CENTER is located south of Dolley Madison Boulevard and centered around the intersection of Old Dominion Drive and Chain Bridge Road in the Dranesville District.  The plan would foster opportunities to implement a vision developed for the area, focus redevelopment to the Center Zone of the CBC, increase the number of residential units, and incentivize a bonus density, additional story height to a developer in the Center Zone by providing an open space amenity, a park.

The plan included a "milestone analysis." It noted that the impact of new development in the Center and General Zones be provided to the Dranesville District Supervisor as an annual update. The analysis would include a summary of development activity in the CBC, including projects in various stages of entitlement or construction, proffer mitigations, and public projects.  It would also include the impact on schools, transportation, and environmental infrastructure.

The Center Zone would be mixed-use, with structured parking recommended, active ground floor uses, and buildings up to seven stories, 92 feet. It included an exception area, an incentivized Bonus Height Area of one consolidation of up to six acres eligible for heights up to ten stories, 128 feet if it provided a signature central park/open space of about two-thirds an acre.  In addition, the plan recommended a network of high-rise, well-distributed, and connected, smaller parks.

The General Zone surrounded the Center Zone. It was planned as a transition to the Edge Zone with low and mid-rise development and building heights transitioning from up to five stories at 68 feet then down in scale. This would be typical neighborhood or retail uses with active ground-floor uses and accessed mostly from surface parking.

The Edge Zone would remain as currently planned with recommendations at three stories. In the adjacent General Zone: Land Unit G-2, around Franklin Sherman Elementary School, height dropped to 40 feet, as would height in Land-Unit E-5. The environment section contained ecology, urban forestry and stormwater management, and green water practices and guidance recommendations.

KIM DORGAN, Chair of the McLean CBC Task Force, said they held 29 public meetings that "tackled every topic after much in-depth discussion and almost always concluded with a compromise solution. "I believe that this is likely the most aggressive plan that could be supported by our community. I really hope that what you approve today is enough to encourage investment in McLean," Dorgan said.

Dorgan centered much of her concern on the possible lack of "enough of an incentive that would result in a plaza." She said developers could build another seven-story building with no requirements to set aside land versus a ten-story building with the requirement to set aside land. "Our last plan was viewed as too prescriptive and limiting as to what businesses could be built in certain areas... I fear that if we did not get this right, McLean will continue, as is, for another 20 years and will be left behind," Dorgan said.

Before the Board vote, Foust said he heard from residents with differences of opinion on the revitalization plan.  They wanted to ensure that the Board preserved convenient parking and access to local businesses, especially community-serving retail. No one wished for McLean to become a Tysons or Bethesda with soaring building heights. The plan amendment would facilitate implementation and the community's vision for McLean Community Business Center.

"We are not creating another Tysons," Foust said. "Although support for plans obviously is not unanimous, it has something for almost everyone."

Comments During the Public Hearing

Scott Spitzer, First Vice-President of McLean Citizens Association, said the organization supported the impact analysis. It required evaluating the residential development potential in the Center, and General Zones for impact when schools and other public facilities reached a ten-year mark or 1,560 residential units were built or entitled to be built in the zones, whichever came first. He said MCA urged the Board to include in the plan unequivocal support and direction for surface parking in the General and Edge Zones.

Dennis Findley, architect and planner said the process in its entirety was designed to create a predetermined outcome. He described the ending as "a mini megalopolis of high-density characterless nothingness, with postage stamp size open space."

Linda Walsh, a coalition member of Right Size McLean, said they sponsored a survey to capture the opinions of their community that represented over 1,200 households. According to Walsh and the survey, respondents wanted to keep building height skylines consistent with current landmarks. She said 90 percent of respondents supported more stringent stormwater runoff guidance.

Kathleen Wysocki, McLean Mews Homeowners Association urged the Board to place Land Unit G2, which is bounded by Franklin Sherman Elementary School and McLean Baptist Church along the eastern and northern edge, in the Edge Zone. She noted the plan failed to consider additional traffic routes or mitigating measures for through traffic within the business area.

Michelle Rosati, an attorney with Holland & Knight, said she spoke on behalf of her client, who owned 1330 Chain Bridge Road, the old Safeway building. She questioned if the plan spurred the redevelopment that made the Vision Plan so compelling as a good idea.