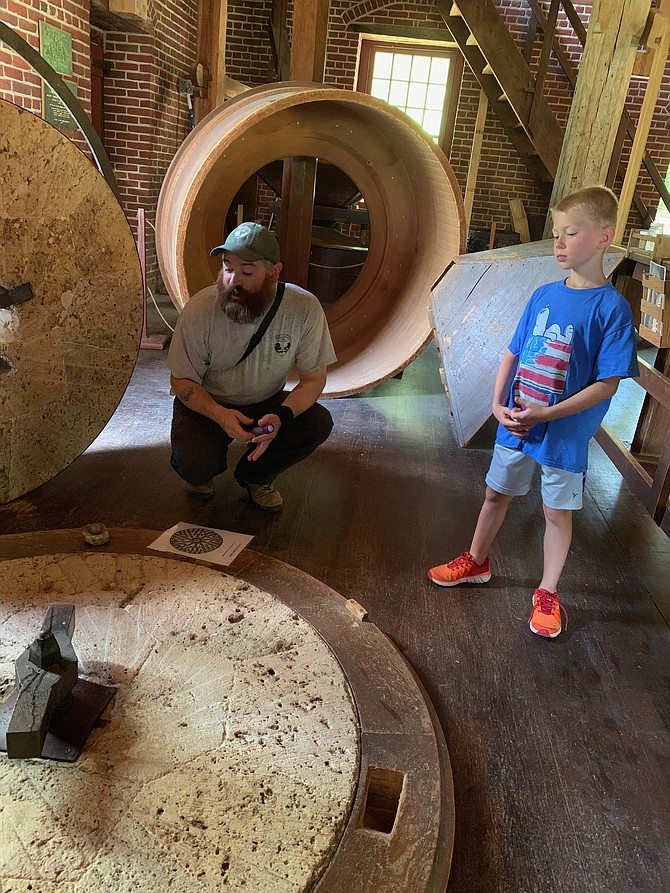 Issac Siren, 7, of Oakton, learns about the milling process by examining a disassembled grinding station. Photo by Anna Karl/The Connection 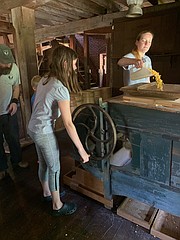 Mireya Graff, 10, travelled from Potomac, Md. to experience what milling was like in the 19th century.

Children and adults from all around the area gathered at Colvin Run Mill on Sunday, June 30, to learn about the milling process in the “Run of the Mill” class.

Stephen Golobic, the expert miller on the site, ran a hands-on program demonstrating all he knows about milling and the Colvin Run site specifically.

The property was once owned by George Washington, and the mill itself was built around 1810. It was in use until 1934, and then lay dormant until 1968, when Fairfax County bought and began to restore it.

The county restoration strived to take the mill back to 1810, no longer using a water mill and instead building and restoring it to the way it was originally used. Around 70 percent of the building is original.

“Our goal is education and preservation,” Golobic said.

The class began with a detailed tour of the building’s four floors, each accompanied by explanations and demonstrations by the miller.

Following the tour, community members were given the opportunity to partake in the milling process themselves. Golobic instructed the attendees on how to clean, mill, and sift grains using their antique equipment, and each person was able to take home their own sample of what they produced.