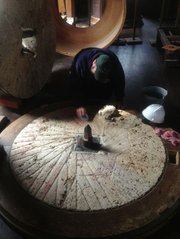 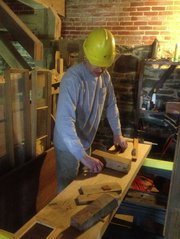 Ben Hassett, one of the few remaining millwrights in the nation, has been conducting repair work at Colvin Run Mill in Great Falls. 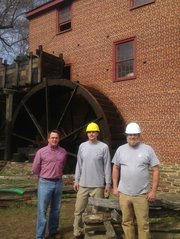 Last year Colvin Run Mill in Great Falls entered a contest to win grant money through the Fairfax County Park Foundation. The result was a fourth-place finish among 24 historic sites in the contest and a $75,000 grant for Colvin Run Mill, the largest grant in the site’s history. This money is now being used to fund restoration of the mill. Fairfax County spent about $1 million restoring the mill between 1968 and 1972, but stopped before finishing when funds ran out.

“This project is to complete restorations begun in the 1970’s,” said Ben Hassett, one of the few remaining millwrights in the nation. Hassett has been working at Colvin Run Mill to help the mill to mirror a system outlined in Oliver Evans’ 1795 book, “The Young Millwright’s and Miller’s Guide.” The mill was built circa 1811 and is the sole surviving operational 19th-century water-powered mill in the Washington, D.C. metropolitan area.

Fairfax County Park Authority hired HITT Contracting, who turned to Ben Hassett and his Lynchburg company, B.E. Hassett-Millwrights, to handle repairs at Colvin Run. Hassett-Millwrights specializes in repair, maintenance, restoration and reconstruction of wind-and water-powered agricultural and historic sites. Hassett has been working on mills for seventeen years. “I have worked on a few mills throughout Virginia and the country,” said Hassett.

AT COLVIN RUN, the first shaft was warped and unable to turn the second shaft. There was not enough money designated to fix the problem when restoration began in 1968, so Colvin Run has been using only one millstone. Hassett removed the shims that locked the gears in place on the shaft, and then suspended those gears so that they hang freely. This allowed him to remove the estimated 800-pound counter shaft from the mill and take it back to his Lynchburg shop. It was used as a guide for the creation of a new counter shaft that was fashioned out of white oak, matching the material used in the original mill.

Hasset expects to be putting in about 50 hours of work per week to complete the project. At some points he has referred to other historic mill machines to ensure the historic accuracy. “The guys who did the work here in the 1960s and 1970s did the same thing,” said Hassett. Everything will be designed to meet the capacity of the system, including machine speeds, grain flow, and meal flow. What dictates all this the water speed.

“It is very exciting to be here, we are absolutely thrilled to restore this type of technology and make a better connection with the past of Fairfax,” said Colvin Run Mill park manager Mike Henry. “It is not just about the past, it is about the future and the kids who will learn from this and where they will take it. The phrase historic site is a verb and not a noun.” Park staff plan to alter tours of the mill so that they not only discuss the history of the mill, but include information about renovations.

IN ITS HEYDAY, the mill could produce between 10,000 and 12,000 pounds of flour per day. Subsequent work is planned on the mill building’s second and third floors. This will include installing grain cleaning equipment, completing the mill’s system of flour delivery, completing an internal rope hoist, and changing fittings to a period-appropriate design.

“It will be spectacular to see the mill in complete operation and bring back the life of the mill from 1810,” said Mason Maddox, who has served as the site’s miller for 15 years. Colvin Run Mill Park is located at 10017 Colvin Run Rd. in Great Falls, at the intersection of Colvin Run Rd. and Leesburg Pike (Rt. 7). To read more about Colvin Run Mill and upcoming events, visit www.fairfaxcounty.gov/parks/colvinrunmill.