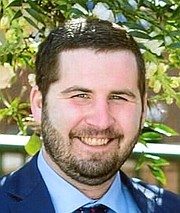 Andrew “Drew” Hess Rybicki died on July 1, 2019. Drew was born on June 6, 1986 in Potsdam, N.Y., to Connie and Steve Rybicki. He moved to Mount Vernon on Feb. 12, 1988. He welcomed his baby sister, Kelsey, on Aug. 14, 1990. Drew graduated from St. Louis Elementary School, Bishop Ireton High School, and received a B.S. in Criminal Justice from Marymount University. He had a varied career and was supporting the legal department at the International Monetary Fund in Washington, D.C. at the time of his death.

According to the state medical examiner’s office, the cause of Drew’s death will not be known for about 90 days.

A natural athlete, Drew competed in sports, particularly basketball. He volunteered to teach basketball at the Boys & Girls Club in Alexandria. He was a true fan of the Redskins, Wizards, and UNC basketball through good seasons and the not-so-good. An avid golfer, he never passed up the opportunity to play a round with one of his many friends. Over the last few years he was learning how to navigate the Potomac River on his family’s boat.

Earlier, he served as an altar server and spent several years as a Boy Scout enjoying camping and the outdoors.

Drew was known for his quick wit, infectious smile, and his kind and compassionate spirit.

He had a passion for learning and reading and for starting a conversation with just about everyone he met. He made them feel at ease while able to converse on topics ranging from sports (football and basketball were his favorites, including team stats) to the economy and world events.

He is survived by his sister Kelsey; brother-in-law Nate; his Mom and Dad, many aunts, uncles, and cousins.